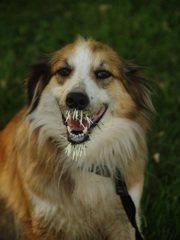 I’d pulled the onions from the garden, fearing a hard freeze.  It was 5 o’clock, just enough time for a quick bike ride before I had to cook supper.  I left the onions laying out to dry in the last hour or so of sunshine and whistled for the dogs.  Vernon had started cutting hay down across the bridge… a nice flat ride!  The light freezes had put a damper on the mosquito situation in the fields, so for an adventuresome change, that was the direction we headed.  I pedaled through the dust and avoided the mud puddles… Four dogs accompanying me, each darting here and there.  Elsa stays close.  Lucas and Dally roam ahead.  Boomer always looking for something to chase.  We went through the silver gate, across the bridge, the sweet smell of hay laying heavy in the air.  The dogs, of course, smelled a million more smells than I could ever imagine.  We drew parallel with Vernon and the equipment, the pair quickly chewing up the hay and spitting it out in nice windrows.  I thought the dogs would smell a rabbit and be on the chase, but they all settled down nearby me, panting.  Amazingly enough, the light freezes had not killed every mosquito, so soon we were on the return journey.  Vernon pulled to a stop and walked over to visit with us.  The dogs finally did as I predicted, running into the tall alfalfa chasing butterflies… or something.  We watched for a bit, exchanging pleasantries.  The dogs were not barking but the English Shepherds encircled something and did the “pounce” as if a mouse was hidden in the lush greenery.  Lucas pulled back a distance rubbing his nose on the ground.  Vernon knew he had just been sprayed by a skunk.  I couldn’t tell from that distance, so I called them back, and they quickly left their prey.  The closer they got the more dismayed I became.  The culprit was no rabbit, mouse, or skunk, but the evil porcupine.  Lucas had 30 quills on the right side of his jaw, Elsa on the other hand had multiple quills deeply imbedded in her nose and chin.  Further inspection showed some in her tongue and the top of her mouth as well.  Dally was unharmed, surprising me since she’s the one who had cornered the raccoon that very morning and actually entered the culvert with the coon!  Boomer, ah, Boomer, who as a year old pup had an encounter that rated him 200 quills (I counted), was also quill free.  Elsa came to me hoping for relief and I jumped on my bike and pedaled for home.  Multiple times along the way, she’d stop, putting her nose down in the dirt and moaning.  Oh, it broke my heart, but all I could say was “C’mon, let’s get you home.  Let’s go.”  She’d lift her nose and trot alongside, sure I’d help all I could.  I’ve never heard a dog moan in pain, even Lucas with his severe injuries didn’t moan.  A whimper, a whine, yes.  But when she’d moan it took all I could muster to lightly say, “You’ll be OK.  Come on, girl.”  Arriving home I grabbed some pliers and some fabric for a muzzle.  Lucas went first.  Ever the trusting gentleman, I pulled his quills with hardly a disagreeable air about him.  They weren’t in deep and his trust was apparent.  Elsa was different.  I pulled a few of the easier ones.  I hated to muzzle her with the ones inside her mouth obviously giving her quite a bit of pain.  I yanked on a few of the deeper quills and Vernon quickly voted for a trip to the vet.  A phone call to the office went unanswered.  We called his cell phone.  We called his home phone.  I changed clothes.  I gathered the onions to put them inside.  I loaded Elsa.  I called again.  I got a drink.  I tapped my foot. “I’m leaving.”  The trip would take an hour as it was, might as well get a head start.  I’d call from Ten Sleep and again from Worland, the only good spots for cell reception.  My favorite vet wasn’t answering anything, so I drove to his clinic, where  his house is just adjacent.  Finally!  He had just gone inside and I offered to go to the other vets if he wasn’t available, but he came out to his clinic and soon Elsa was on the table.   Within minutes she was sliding sideways into my arms and Dr. Steve went to work.  He managed to pull all but one that will have to fester its way out.  Blood and quills lay next to Elsa.  A shot of penicillin, a shot to revive her, a handshake and smile.  A quick dash to the drive through, tacos and a drink giving me the energy for the drive as Elsa quietly waited to be chauffeured home.  At home, I invited her inside.  She refused water and food, too tender for the moment.  I sat on the couch, she leaned into my leg and sighed and sighed again.  I sighed.
Find me here!