A week or so ago, I was visiting with some younger people who’ve only lived in Ten Sleep a few years.  They commented on how their visiting friends repeatedly say “How do you live HERE?  What do you do at night?”

There’s no clubbing in Ten Sleep.
There’s the Bar and the Saloon and that’s it for *late* night activities.  Still not exactly booming with boisterous crowds.
But, for those of us who have raised kids here, there’s always a basketball game this time of year.  We go and enjoy looking at all those kids we remember as tiny tots, now playing basketball and growing about 2″ a month.
If we’re lucky.
Ten Sleep seems to be very strong on the short gene.  We are height impaired… at least compared to other teams.  The other night we played the  St. Stephens Eagles, located just out of Riverton, Wyoming on the Wind River Indian Reservation.  There was no way we could defend against their big guy.  He’d plant himself under the basket and make every shot if he got his hands on the ball.  He was 6″ taller and 50 pounds heavier at best guess.  Block out?  Forget it, they’d bounce off of him.  Intercept a pass?  They’d jump and he’d reach over their heads.  Block a shot?  The wild swings would garner a foul every time.  He was good.
In fact, St. Stephens is regularly an outstanding team… often making it to state.   Daniel’s team played them once at state… and lost in triple overtime.  Let me tell you, it’s *wild* when the entire reservation comes to back up their team.  No one has better supporters than the reservation teams!  I even took video of the last exciting seconds of the game yesterday, anticipating quite the excitement… they did come from behind in the last minute and beat us by 4… but it was so mild in comparison to past years, I was shocked.  Maybe the wild days are over… maybe too many people were anxious to get out in the great warm weather we’ve been having.
The Indian team plays the same… they can run you into the ground!  You have to avoid playing their game or you’ll be sucking for any breathable air by the second quarter.  Our little guys did great… leading for most of the game.
I enjoy watching them… and reading off their names from the program.  C’Hair and Littleshield, Oldman and Quiver, C’Bearing and Makeshine.  Their names remind me of music…
Today’s entertainment consisted of something entirely different.
Today we burned the humongous pile of dead trees we’d hoped to incinerate on New Year’s Eve (but we didn’t since it was -15 that night).  Overly cautious even in the deep snow, we called into dispatch and told them we were building a bonfire just in case someone called it in…  Then we took the firetruck for a spin, which it needs every now and then for good measure anyhow! 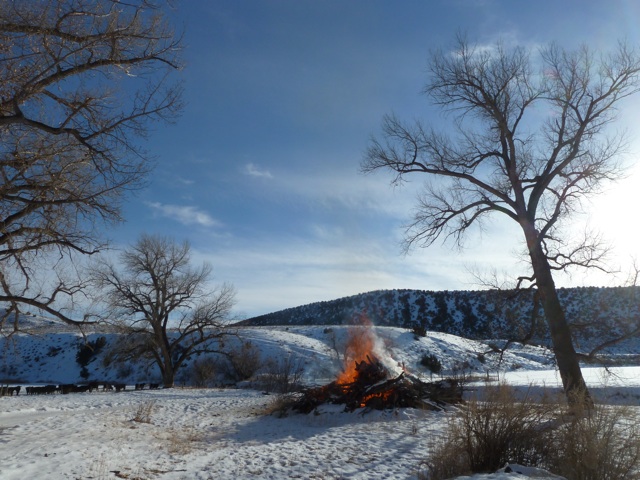 It would have been VERY spectacular had we burned it at night. 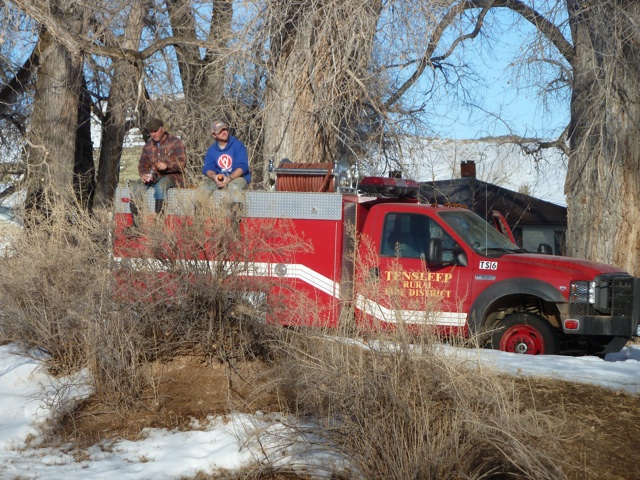 Nothing like sitting around bs’ing while watching something burn… 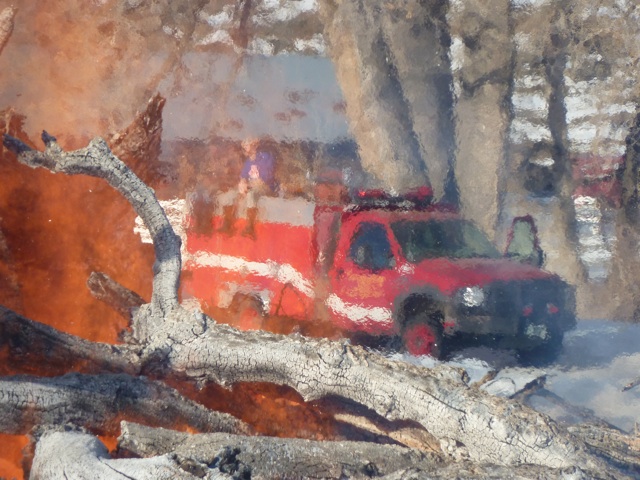