(Reminder: I won a contest from Beef Magazine for one of my Cowboy Santa photographs.  This is the result!)

The flying trip to Greeley was over last night, and we even arrived home at a decent hour, but I didn’t have any photos since the girls were in charge of taking pics for me… and I was tired… so, you didn’t miss a post yesterday – there simply wasn’t one.

We arrived early at Greeley Hat Works… after our misadventure last night of driving to the motel from the restaurant, we elected to have plenty of time for the drive from Fort Collins to Greeley!  We grabbed coffee and pastry from a Starbucks… my first trip to one!  Yes, I have joined the legion of Starbucks customers… though, truth be told… I simply found it adequate.  Though I like my coffee, I am far too cheap to pony up that kind of money on a regular basis!  I could have people-watched there though! 😉  It *was* fun for a once-in-a-great-while treat! 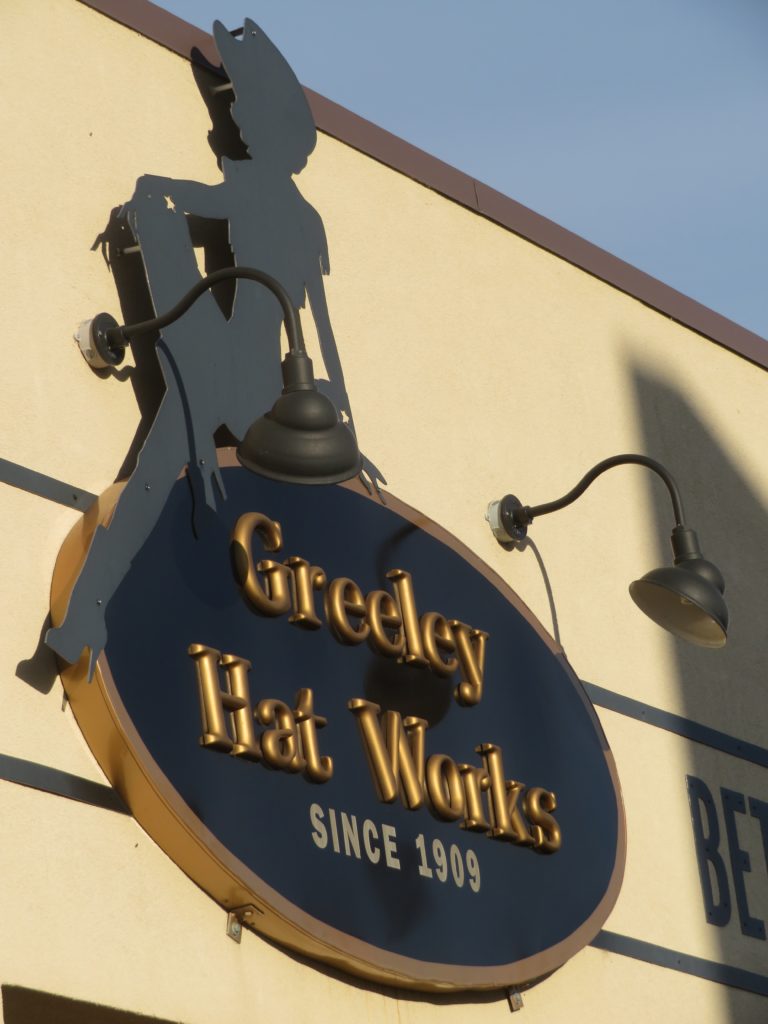 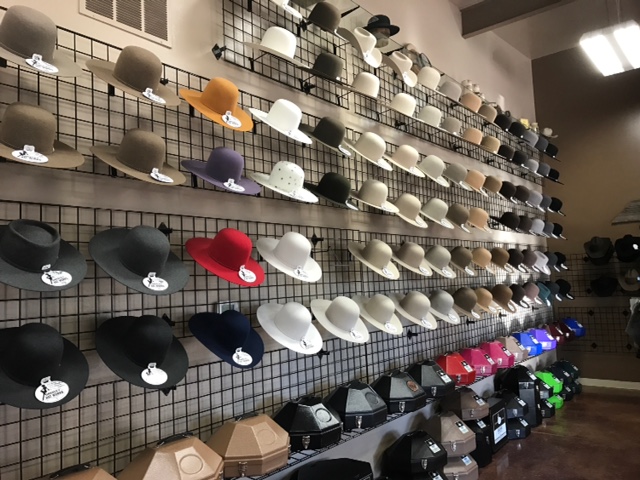 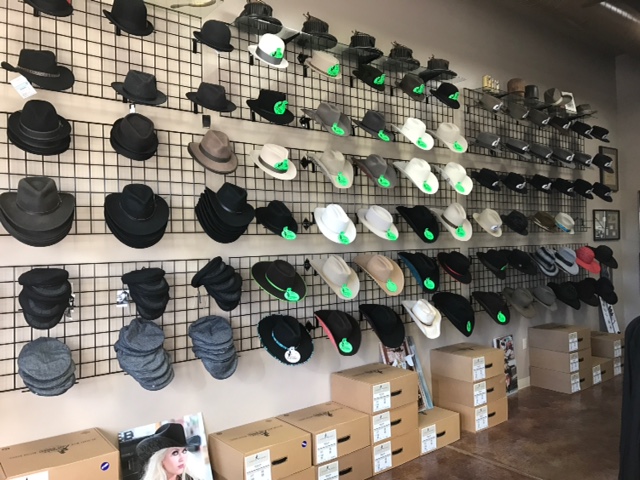 Then there’s the great antique hydraulic chair in the center. 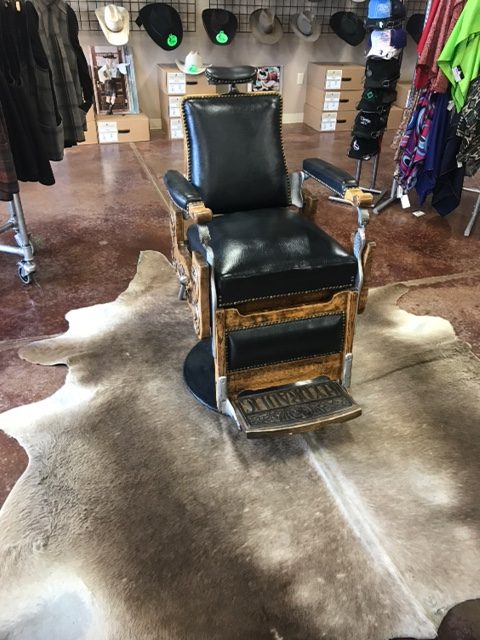 After discovering that I did, indeed, want a custom hat, I took a seat, and a Very Nice Guy, Travis, fitted me with a Victorian device to measure my head called a conformateur.  It produced an accurate outline of my head, which was transferred to a piece of paper, that he then cut out and will use as a template to make my hat. 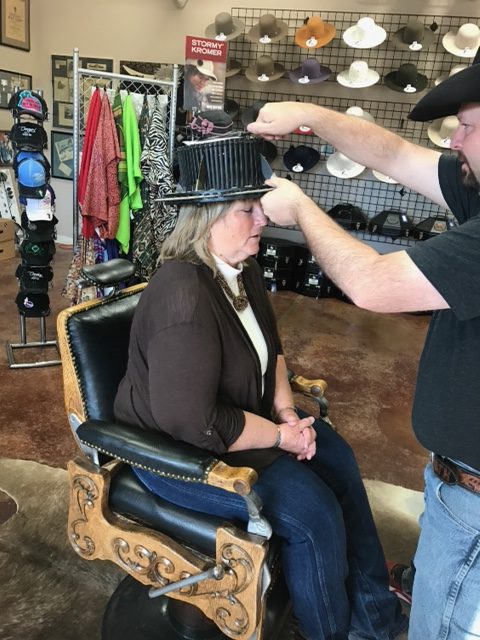 Tess and Megan, meanwhile, were happily trying on some premade hats…

Megan is ready for the Kentucky Derby… 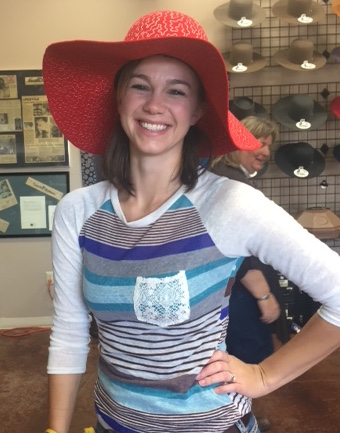 Tess is gonna be a rodeo queen! 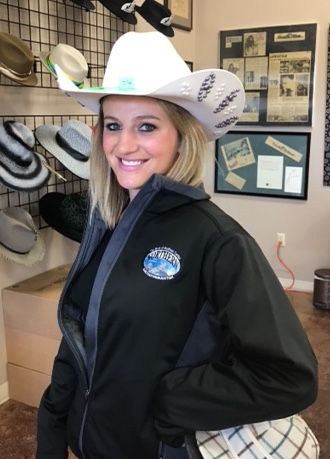 (They actually did take a photo of the girls modeling their new Miss Rodeo America baseball caps, but they didn’t show their faces… You can find it on the Greeley Hat Works facebook page.  I think they missed an opportunity to use some great models!!!)

With all the colors available… I chose… DARK BROWN.  Or as Travis called it… CHOCOLATE.  Which makes more sense!

A few more details… liner, sweatband, trim… Yeah, I went all out! 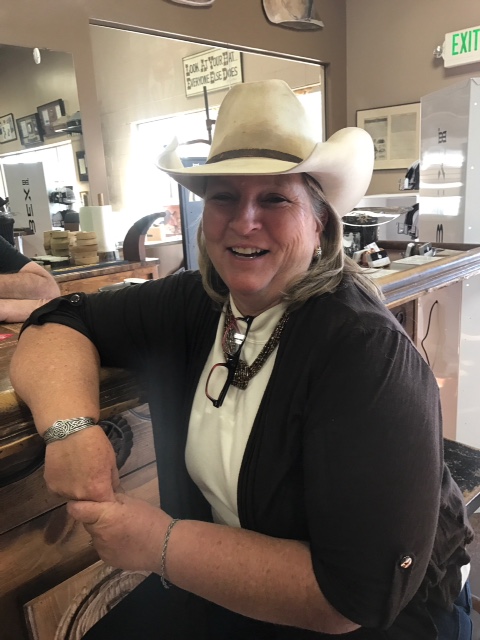 Ha!  No, I’m just pulling your leg!  Although the shape of this one was the one that most closely fit the shape of my head, mine will NOT LOOK LIKE THIS ONE!  Travis said they do sell a lot of these – pre-dirtied.  We decided we could sell some of our old hats around here at the ranch, the trick would be to get the smell out!!  This one LOOKS bad, but it is actually new and smelled just fine!  I guess it’s like buying jeans that already have holes in them.  People prefer to not have to work in the sweat and holes, but they want to appear as if they do!

Our visit was soon over, and we piled in the car one more time, made a quick stop at Boot Barn, just because… and we headed north!  We grabbed food along the way, stopped off for a quick visit with Victoria, and were home by 9 pm.

It was a whirlwind trip that was full of fun and giggles and some great food… and my pocketbook will be hurting for a while!!!!  But it was one of my best Christmas/birthday presents EVER, so here’s a BIG CHEER for my daughters-in-law (or is it daughter-in-laws??? believe it or not, we debated about this at one point in the long drive!).

Thank you, girls!  It was fantastic.

Oh, yeah.  My hat should be done at the end of January… and there is the Denver Stock Show about that time… We are looking forward to a return trip! 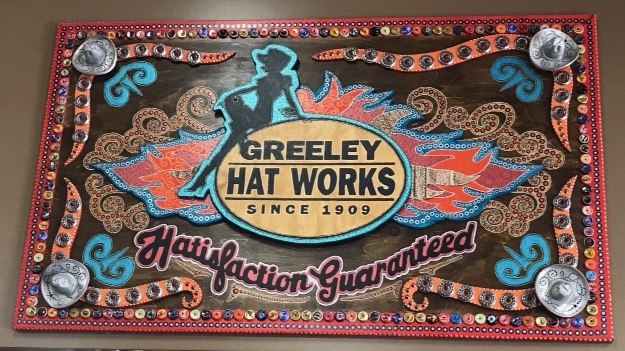