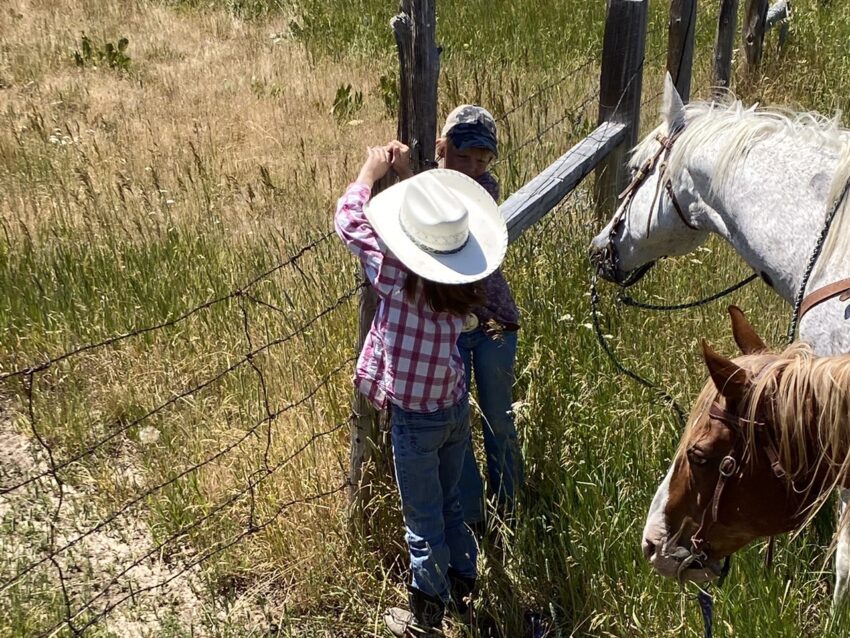 Cowboy Courtesy says as a bunch of you are riding along, the guy on the fastest walking horse, and, therefore, the first to reach a gate, opens it. Now Panama is a slow walking horse and I usually was trailing behind… which was fine, it gave me opportunity to take pics, or I was behind because I stopped to take pics! Whatever. Opening gates was not my job unless I was in the lead with the herd.

Now, I ride Milo. Milo walks fast. Milo is tall. Carol needs Milo in a ditch so she can get on!

I admit. I take Full Advantage of being the oldest, fattest, and slowest cowboy in the bunch. I ditch Cowboy Courtesy.

When we rode the other day, splitting up and going three different directions, at the end, it was Victoria, Wyatt, Lorelei, Lacee, and I. I rode to the gate and stopped off to the side, giving Victoria full access to the gate. Much to our surprise, Lorelei rode up and bailed off of her horse!

“You’re going to get the gate?” Victoria and I looked at each other.

“I’m going to try!” came the cheeky response. You go, girl! was my thought!

Seconds later, Lacee volunteered that she could help. You go, too, girl!

A little repositioning… and they tried again.

A little grunting. A little encouragement for each other…

“Good job, girls! Nah, leave it open, the others will be here soon and they’ll close it.” They each strode to their horses and clambered on.

Life lessons from a gate:

Go ahead and try something new… you might just be successful.

Shifting position can give you more advantages.

Help those behind you by leaving the gate open, but know if there are cows around!

Completing part of a job can still give you satisfaction.

It’s ok to do the easy part of the job until you learn that the rest of the job is much harder. When you’re able, do it all! (closing a gate is MUCH more difficult than opening one)

Later on, someone might teach you tricks of the trade to make the job easier, but for now, just try!