With the weather being so nice (barring the wind), my garden is ahead of schedule.  It’s rototilled and fertilized and ready to go.  There’s a few things I’m doing different, though.

First of all, I didn’t “clean” it like usual.  I left everything but tomatoes and squash vines in the garden over the winter, letting things begin to decompose, which trapped leaves from the trees as well.  I tilled them under hoping to add more compost to the garden.  No, it’s not really pretty.

Now I know about lasagna gardening, and hey, I’ll give you an update on my hugelkultur bed soon, but my heart tells me my garden should be clean and tilled and so I do it, though my brain believes that adding compost will only enrich the soil.  I use mulch throughout the summer, and it gets tilled in, but that seems okay for some reason!  Don’t ask me why!

In the past I’ve tried those leaning pots stacked up along a rebar to go vertical, but I really couldn’t keep the dirt wet enough in them.  That was a fail.

This year, I’m trying two new things… the first is straw bale gardening.  Basically, it’s planting in prepared straw bales and letting them rot on down into your soil and then composting them.  I’m also trying something a friend recommended which is called an EarthBox.  The essence of it is a plastic planter with a water well in the bottom that constantly wicks water.  He said he’s never grown tomatoes like that before!

OK.  I’ll try just about anything…

First step:  Gather straw bales.  I’ve asked the guys if there were some left in the calving shed.  The word was a rabbit had got in the calving shed and chewed all the strings.  They’ve been packing loose straw for the last of the heifers with a pitchfork.  No bales.  Now, I had helped them enough to know about the rabbit in the shed, but, really?  He’d eaten EVERY string on EVERY bale? 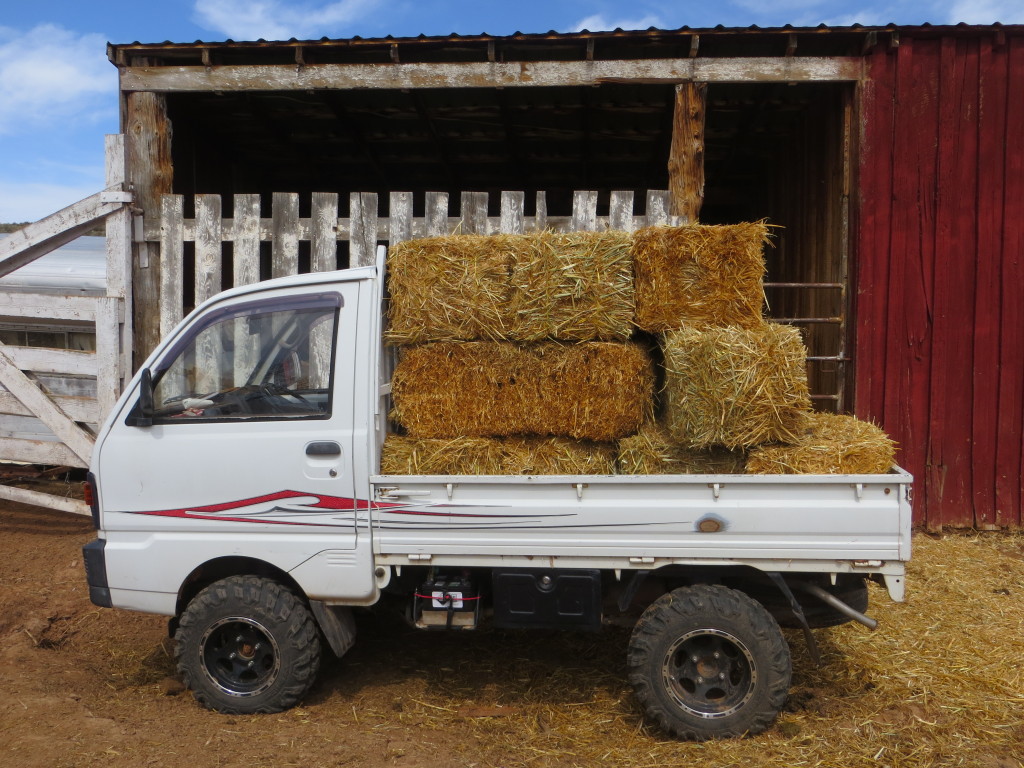 I found 10 bales under the loose straw uneaten.  Perfect!  Five for me and five for my sister… I’ll take you step by step through the process.  Any of you tried straw bale gardening?  Do you have any tips?