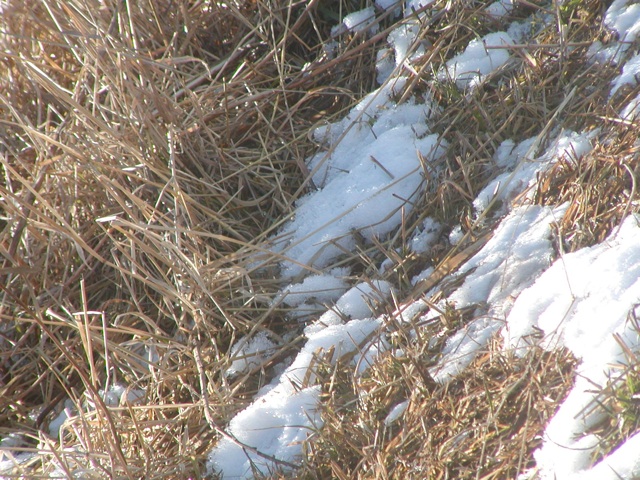 When Lucas and Elsa had their litter last November, one puppy stood out due to his coloring.  Drifter, as I called him, had a drift of white snow on the right side of his face.  Not simply a wide blaze, a bald face, atypical in English Shepherds.  Among the four males in the litter, Drifter was the most agressive.  Doux was clearly Alpha, but he was relaxed and led by stature after the others had first checked out the situation.  Drifter on the other hand, was first on the scene, investigating every new situation.  I had great hopes of him being a heck of a cowdog!  I found him a great owner … Bryan Pickeral who lived just over the mountain.  We made plans on meeting up on the mountain this summer where we both run cattle.  Unfortunately, I found out a few weeks ago, that Bryan had been in a horrific car accident, rolling his pickup and being ejected through his windshield.  A week after I found this out, Bryan called me.  He had, of course, lost his job and therefore his home on the ranch on which he worked.  He asked if I could take Drifter, now called “D”, for a while.  He had just returned home after months in the hospital, and couldn’t take D into his apartment in town.  Bryan was hoping to get a house and would take him back as soon as possible.  So D has returned home.  Scared at first that Lucas wouldn’t welcome his son back with open arms since both are intact, we controlled their first meeting.  Lucas said, “I’m boss.”  D said, “Fine by me.”  And that was that.  Elsa on the other hand enforced her feelings of superiority, which again was fine by D.  Dally played boss #2, or is that 3??? but accepted him as well.  It has been a fairly easy transition to accept him back.  I asked my son Daniel to take D under his wing… hoping that bonding to a male here would help D retain his bond with Bryan when they are reunited.  Watching D is fun… The left side of his face is uncannily like his father.  His light coloring is very much Elsa.  D is a “people person” in Bryan’s words, and sure enough, just like Lucas, D is thrilled to meet people.  D took all the strangeness in stride.  He sleeps in the kennel at night.  He goes with Daniel everywhere he can.  He has cowdog instinct, but calls off easily.  He prefers to shadow me like Elsa over running ahead like Dally and Lucas.  Never did he act nervous or shy or traumatized. He and Dally are now best friends (or brother and sister!).  It has been a great experience meeting one of “our” pups again.
Find me here!