You ever heard the term, “She is out of pocket.”?  Basically it means someone is unavailable, out of touch, gone, removed.  That was me today… at least in one sense.  We worked our heifers, so I had to cancel Lucas’ reading session at school.  Waaah.  Oh, well. On the other hand, we got to ride and work cows, so that was GOOD!
(I took Dally along with Lucas and Boomer and she did lots of things right, moving cows into the herd, gathering stragglers, watching, having enthusiasm…the BIG problem was she did it all without my permission and about 150 yards up ahead of me and at full speed.  We DEFINITELY need to work on that!  Lucas barely got any work, because he was a good boy and stayed back with me. )
But back to being out of pocket.  I love riding and working cattle and the thing that has frustrated me for years is that I am busy and unable to photograph the work.  Take my word for it, nothing will tick your husband off faster than you messing with your camera and letting a cow get away or some such major faux pas!  You better have your eye on the prize cause some cow’s gonna be sneaky or cranky or blind and you’re gonna have to be sneakier or crankier or have 20/20.  Trying a different setting on your camera while the herd runs over the hill is just NOT A GOOD THING.
So I tried my own version of “out of pocket”.  I was unavailable as a good photographer, balancing light and action and framing and apertures and speed, so I let my camera do it all on its own while simply sticking out of my pocket.  Wore my Carhartt with the big pockets, crammed in my little camera with its lens  pointing outward like a telescopic eyeball and I would turn and click the shutter with my left hand.  Some actually turned out kinda cool.  I only took one photo of the inside of my pocket!  Most are tilted, no surprise there!  but it all added to the drama of some of them.  Here are the results. 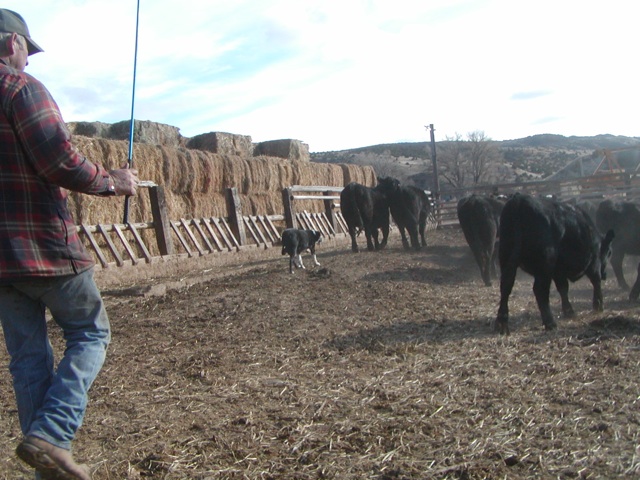 The goal for the day is simple.  We have 140 or so yearling heifers in the corral.  We are going to keep 60 for our replacement heifers, meaning we probably sold about 60 old or “open” (non-pregnant) cows throughout the year, these sweet young things will replace them.  First we sort some out of the big pen… 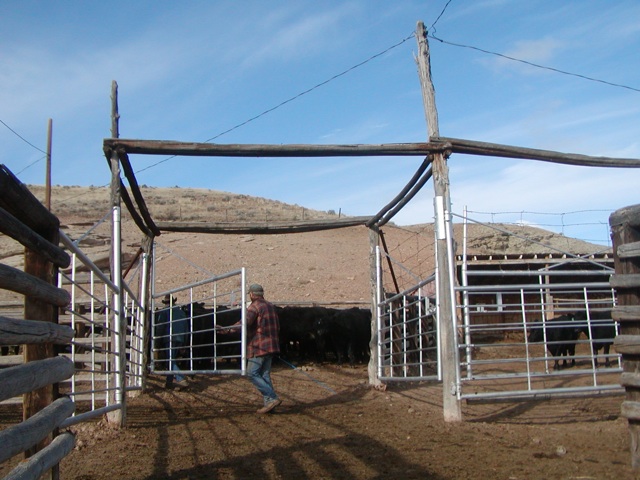 We put some in this pen, some in that pen, shuffle them back out and around, and though it sounds confusing we actually do know (sometimes) what we are doing! 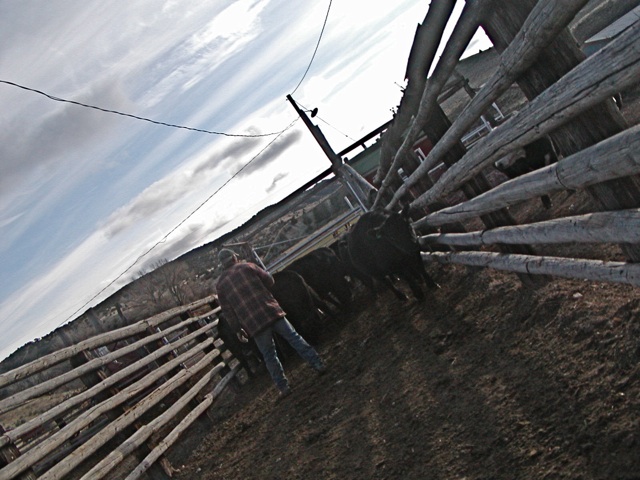 Though those first two photos look normal, this one is definitely taken out of my pocket!  Here comes a heifer…we read her eartag number and decide… keep or sell? 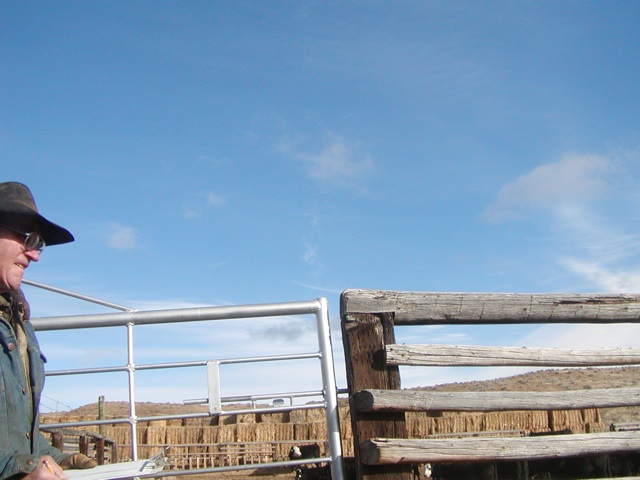 Now lest you think we just call this decision off in a light hearted manner…YOU’RE WRONG!  See Johnny’s clipboard?  He’s studied their weights, their genetics, their temperament, their due date, their looks.  And he has it all right there.  This is D Day.  If they haven’t performed up to standards, they aren’t gonna be A – A cows!  (That’s our brand) 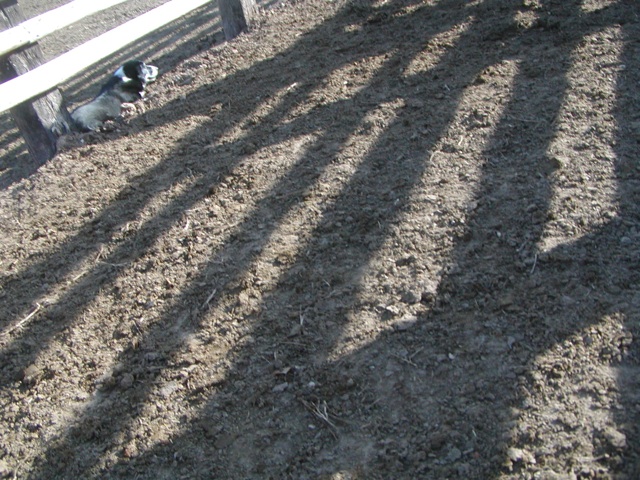 There’s Bob.  Ready and willing to help out at a moment’s notice.  He is much “quieter” than my dogs…often cows will touch noses with him and he’ll actually lick their noses.  My dogs would have eaten the cows when they got within 6′.  Sometimes I wish they’d learn from Bob. 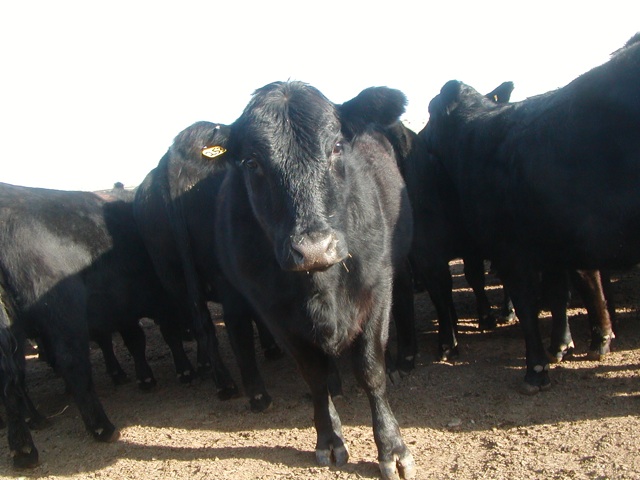 When we have them sorted the way we think they should go, we do a walk through.  Sometimes paperwork still picks a punier looking heifer than it should.  To be honest, none of these heifers were PUNY!  The emphasis should be on the -er not the puni-.  Can you see the little dew drops on her nose?  Dew drops absorb scents and when a cow drags her tongue across her nose it actually increases her sense of smell.  Pretty spiffy sniffy, eh? 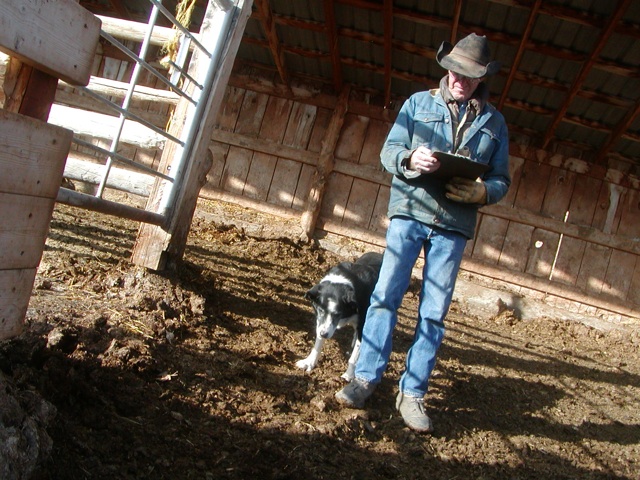 We did some more lookin’ and some more figgerin’… sorted three outta there into here… and finally we were done. 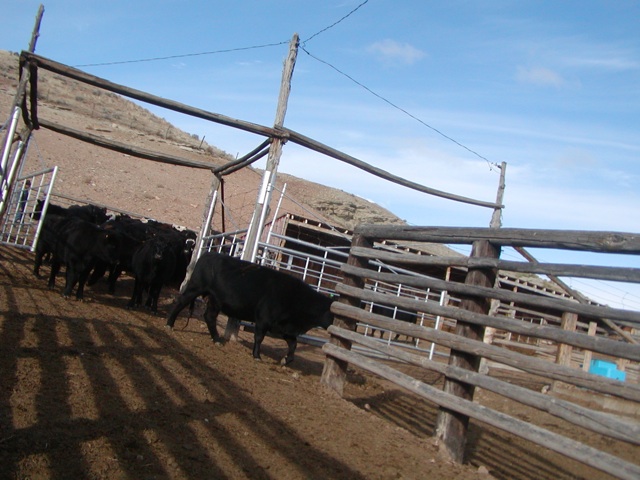 Put that last bunch outta there into here… 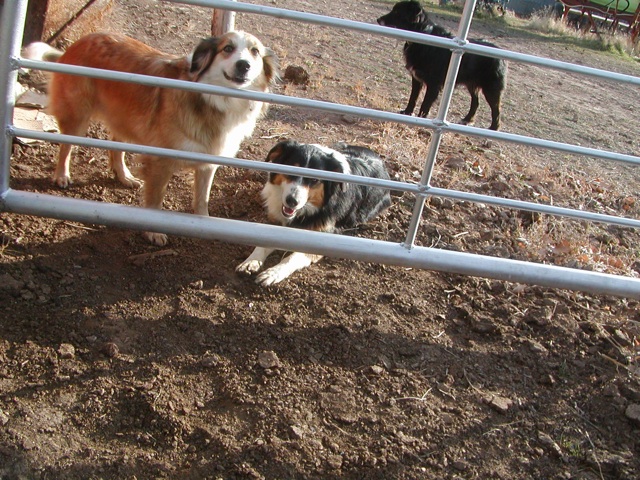 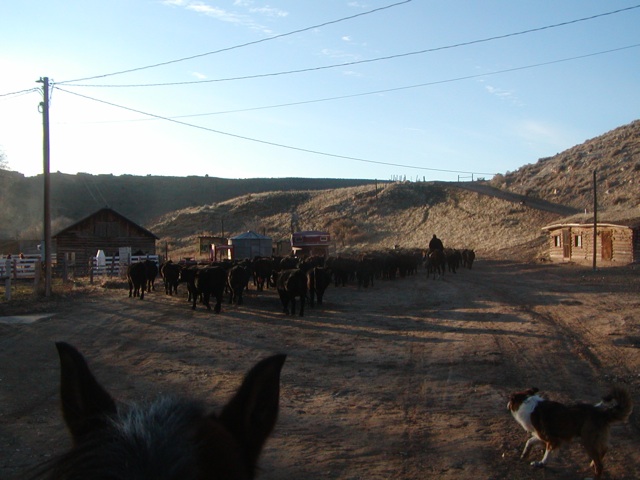 We’re just taking them up that hill behind the bunkhouse.  Please notice the sod roof on the bunkhouse…not many sod roofs around any more!  Lucas is doing well and not pressuring.  <grin> 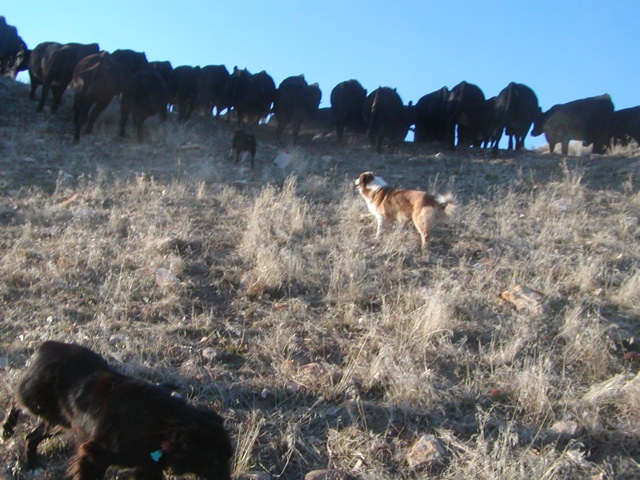 That’s about it, folks… We turn and head for the barn to unsaddle… 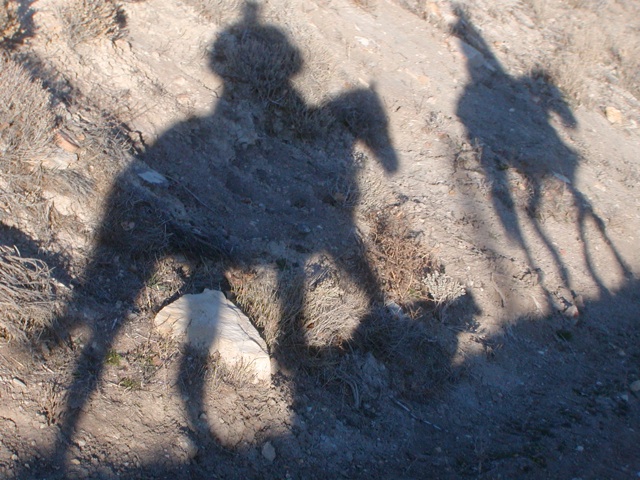 Please note: Tart and I aren’t REALLY twice the size of Major and Vernon.  The sun was doing freaky things, coz I AM NOT like my shadow here!
So ends today’s Out Of Pocket Experience.  I kind of enjoyed it.  I took photos, admittedly not fantastic ones, but I documented the day.  Tomorrow we have to retag and age brand the heifers, so it just might turn out to be another OOPE tomorrow.  Let me know if you like OOPE, and before I go… Here’s my fave photo of the day… 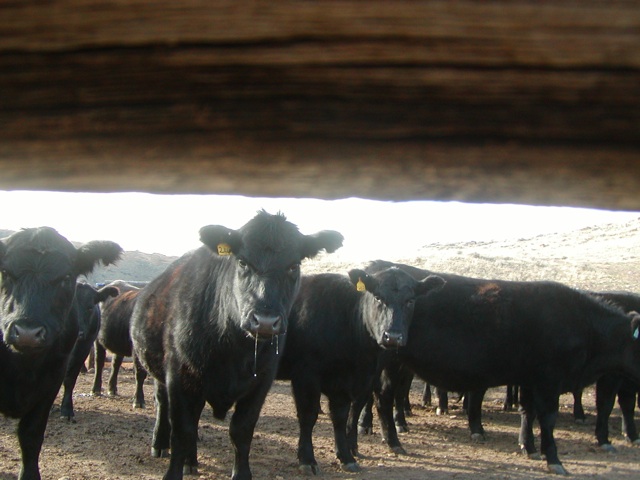 1 thought on “Out of Pocket”