Cousin Robb has posted some photographs of his amazing journey, so I figured it was time to share before I fall too far behind!  He was in Nepal not too long ago.  Land of the Himalayas and yaks.

Here he is at Lake Tilicho.  A sign claims it is higher than Lake Titicaca in Peru, but Robb’s been there too…  Looks like pretty cold weather for an Okie to endure!

Dawn in Lumbini, the birthplace of Buddha.  “A picture perfect spot for meditation…almost strange in its perfectness”  were his words.
Then he has to take some pics just for me… his special cousin…after seeing his 170 photos of amazing scenery, I get these…

This is a yak.  Now yaks are pretty cool… made to withstand brutal temperatures they are fuzzy critters…and have a horsey tail that just amuses me for some reason!  It is just *weird* to have such a tail on such an animal.  It is like God ran out of cows’ tails and used his leftover horse tails instead! 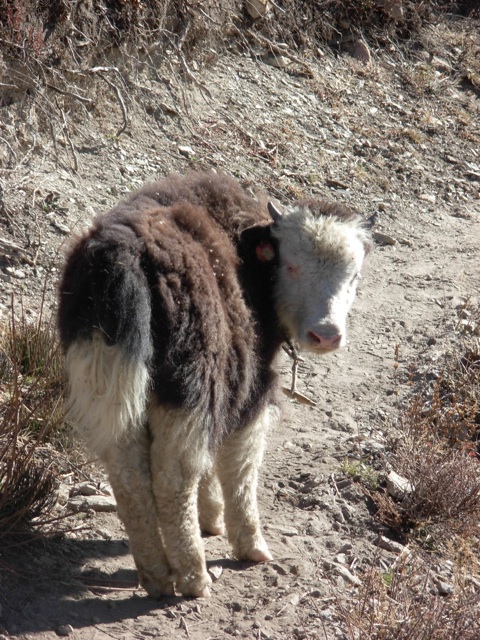 Look here’s a yak calf.  Ain’t it cute???  Now I know zero about yaks, so if they aren’t called calves, I apologize, but I live on a ranch in Wyoming not Nepal, and it’s a calf out here!  We don’t have cool little lead ropes on our calves though… perhaps I should suggest it to Vernon…

I like this guy.  I think the yarn stuff they use for an ear tag is interesting too.  It just looks prettier than the plastic we use, though we rely a great deal on our numbering system.
Now I’m thrilled I got real Nepalese yak pictures… I always try to see the little herd up on the mountain when I drive by, but it isn’t the same.  I wonder why I received yak pics… is it because he thought of me whenever he had yak milk, yak cheese, yak butter, yak meat, and saw yaks in his travels? (Is it yaks?  not yak-i, like octopi, or yakeese like geese… I obviously should have researched yaks more thoroughly before I wrote this ignorant entry!) Anyway, I certainly hope that’s the reason because the other alternative is that the name “yak” could be considered a descriptive term… and I don’t think I want anyone to associate me with yak yak yak yak yak yak yak yak yak yak yak yak yak.  Although maybe it could describe me… sigh… I do manage to write here everyday!
Find me here!