If you live in snow country, you know what Flat Light is.  It is the inability to distinguish depth because the light is flat and doesn’t reflect normally in order for your eyes to perceive contrast and shadows.  Flat Light comes with cloudy skies, snow falling, and snow on the ground.  Watch ski races, and they will paint the bumps blue or yellow.  They do that to help the racer in flat light not wipe out and kill themselves!  You know what you get when you get Flat Light here?  You get stuck in snow drifts!  Which is what happened to Daniel and I as we went to the Mills Place.  Yes, it has been snowing.  Yes, it has been WINDY!  And as we turned off the highway to go the 80 yards to the house I drove right into a big drift across the road, which neither of us saw in advance.  We spent the next 20-30 minutes digging out.  Daniel successfully drove the Durango down to the house, turned around, drove back through the ruts, bogging down a bit, but then making it to the highway where we parked it until we were done.  We went home for lunch.  We then returned 1.5-2 hours later.  For the most part our ruts were drifted back in. 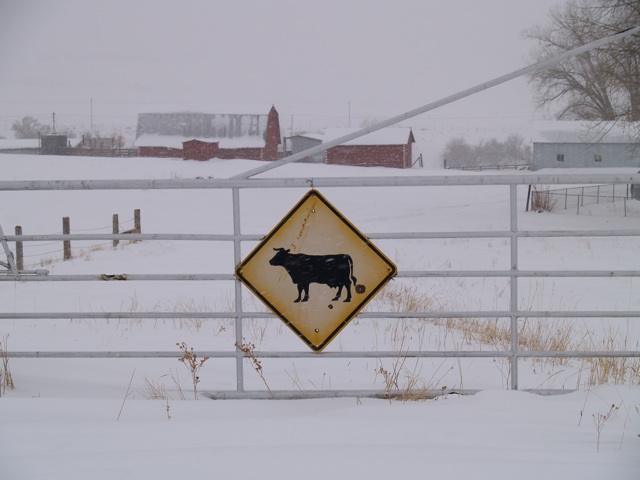 This hangs on the gate at the Mills Place.  I love it, but it has occurred to me to buy one that has an English Shepherd on it instead.  I’m not planning on getting a milk cow.  But the Mills had one.  This sign has been there forever.  Well, OK, a long time.  To the left of this is the cattle guard where we drive down to the house.  About the second post from the end is the drift.  See it???  Yeah, well, neither did I. 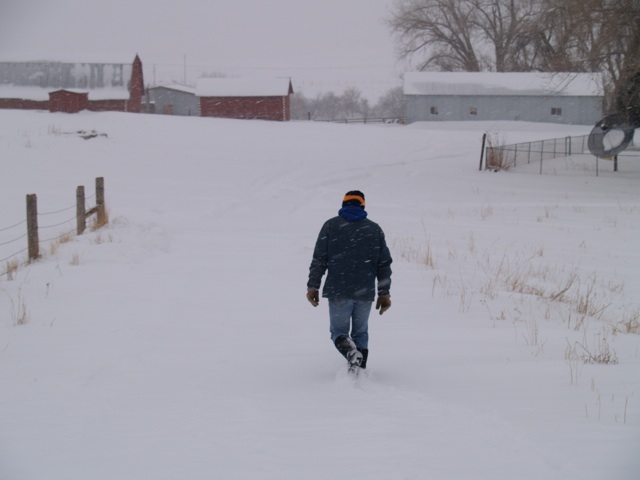 There goes Daniel.  My camera wouldn’t focus on anything at first.  Too much snow falling and Flat Light to do its job. 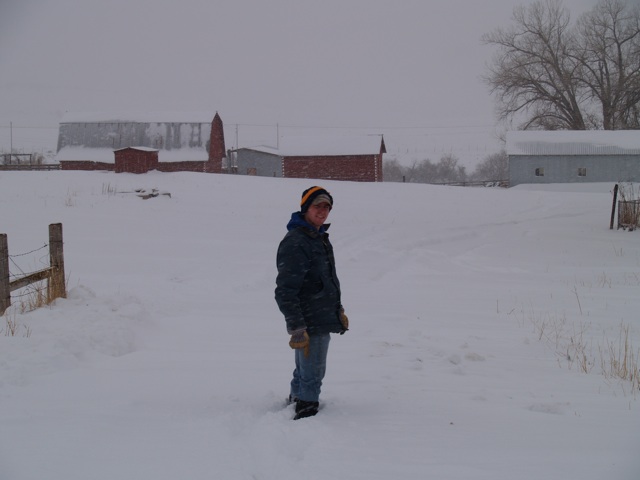 Daniel is standing where you should have seen our right tire rut.   It was all filled in in two hours!  wow. 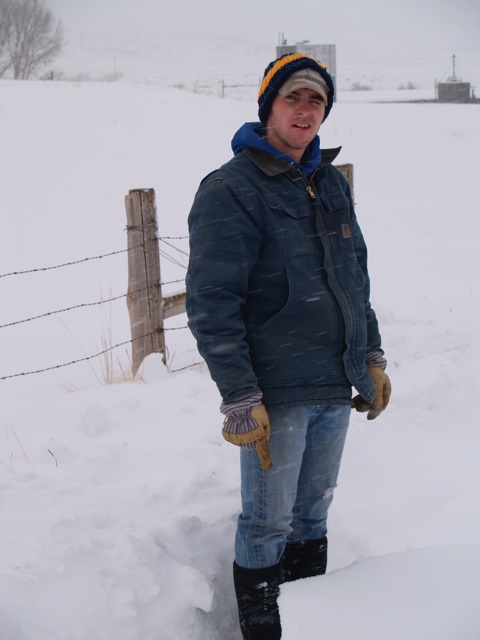 The left side of my Durango was here.  Notice he’s pointing it out for you.  Like you couldn’t figure that out.  He’s so helpful, my son.  I love him.  He dug out my car.  And didn’t complain.  And he hiked to the shop to get a shovel.  Because I don’t carry one in my Durango.  I think he called me Miss-Safety-Who-Doesn’t-Have-a-Shovel-in-Her-Car, or some sarcastic moniker like that.  But for all his hysterical sarcasm, he’s a sweetheart, and I even cooked him lunch for digging me out.  What a thoughtful mother I am!  Notice the snowflakes that are falling sideways in this photo.  That’s why he’s squinting.  Because I made him pose in the middle of a blizzard.  What a kind mother I am.  At least I made him stop sticking his tongue out.  Like I wouldn’t notice, Daniel!  Shees!  Some things you can still see even in Flat Light!
Find me here!