Frustration was paramount today.  We had made it an early day… taking Johnny to Worland to catch a flight to Denver and then San Francisco to see Cindy, Vernon’s sister.  We had our shopping list ready for the big city.  Since it was so early, nothing was open yet, so we went out to eat breakfast.  We then hit the few stores we needed, trying to make a fast escape to return home.  The lumberyard was open at 7:30 and though we really hate shopping there, we went to try to hurry along our progress.  I was not astonished to see they didn’t have the same primer I’ve been painting with at the Mills Place.
Did I tell you I’ve been priming and painting??  I have!  It makes me VERY happy even though there are still a few spots that we are sanding and mudding for the umpteenth time.
So, back to the primer.  They didn’t have the same kind, but they had the same brand… so we bought two gallons of it… It should *basically* be the same, right?  sigh.  You know where this is going…
Took the countertop samples back to this other store.  The one I had agonized over and finally picked out has been discontinued.  sigh.  These were supposed to be updated samples.
My daughter is buying a new car so we needed the title to the old one.  Looked in our safety deposit box.  No title.  sigh.  It’ll be 11 days to get a new one, though they will work with the seller, so the transaction can go through anyway.
The other stops went relatively well, so we blasted for home.  I had high hopes of continuing my priming and painting.  Vernon was going for a sled ride with Daniel for kicks and giggles.  Toria was supposed to grade papers.  Brandon went to see his honey in Worland… the boys couldn’t go along this morning because *someone* has to stay home and feed the cows! 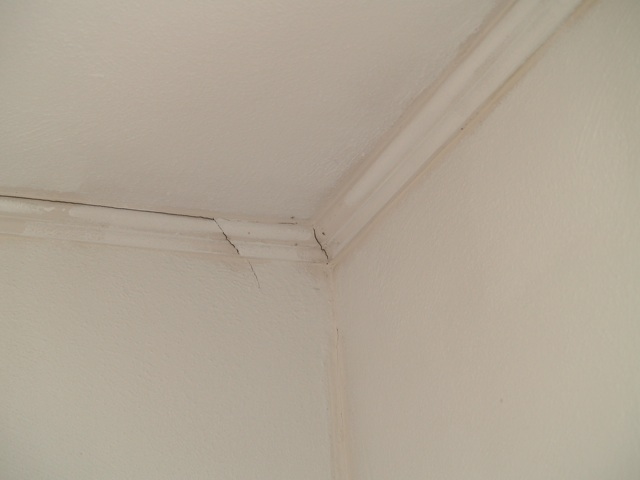 So this is what I had accomplished the other day… white primer over old paint.  I didn’t have enough to cut in the corners, so I had this look going.  Not real pretty.  Yesterday I had even made the next step and put some color on the walls as well, avoiding where I’d have to return and prime the corners. 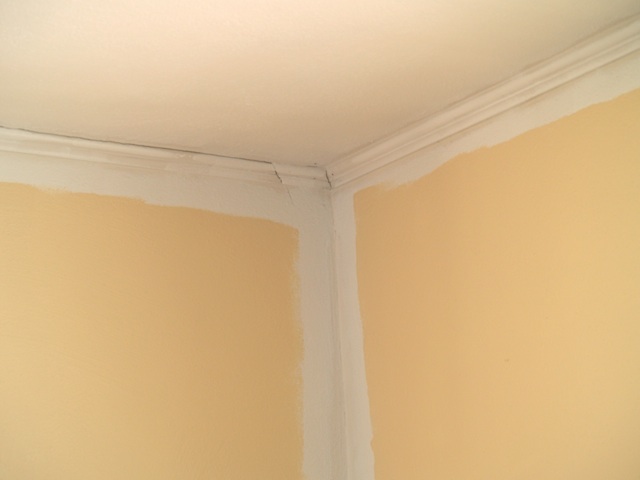 The color isn’t really quite this golden… but you get the idea.
Now I was ready to blast off and paint, but I refrained and sanded and mudded some last minute spots first.  I finally went to work… planning to prime the kitchen and cut in the dining room so that tomorrow I could paint and the guys could start laying more floor.
I had a goal!
I had a plan!
I had energy!
I poured a large amount in my roller pan, grabbed my roller out of the sink where just minutes before I had a drink.  Oooh, my roller was damp, dummy me, got it wet… so I squeezed out some moisture and dunked it in the primer.  I rolled a tad bit on the ceiling and the extra water in the roller dripped… gee, there must be more water in it than I thought.  I took it to the sink and thought I’d squeeze even more water out of it.  The white primer oozed over my fingers and palm and felt strangely…oily.  OILY?  AS IN NOT LATEX????????  The running water did nothing to dissipate the primer.  YOU HAVE GOT TO BE KIDDING ME!  I managed to clean most of my hand and grabbed the can.  EASY CLEANUP was on the main label.  I read the fine print.  Easy cleanup with mineral spirits, said the itty bitty words.  I glanced at the tiny amount of primer I had applied.  A glossy surface glared back at me.  This wasn’t going to work.  AAAAAARRRGGGGHHHHH!!!!!
I didn’t *have* mineral spirits… that’d mean finishing all my painting and then cleaning things with gasoline, if it’d work.  If it didn’t clean up well, I’d have to plastic bag my brush and roller and hope they didn’t dry out since I had no replacements.  The glossy surface had me worried too… would it show through my paint as glossy???  That would make all my corners glossy and I wasn’t going to stand for that.
NOW WHAT????
I admit, I admit… I am extremely guilty of saying profane words.
The kind my mom would be ashamed of me for saying.
The kind I should NOT say.  Ever.  But I do.
Because I’m human and I live 47 ^&^%$(&* miles from the store ONE WAY!  AND I WAS JUST THERE THIS MORNING AND NOW I HAVE TWO GALLONS OF THE WRONG STUFF AND I WAS MAD AND I HATE THIS PART ABOUT LIVING OUT HERE, BECAUSE IT ISN’T A 10 MINUTE DRIVE TO HOME DEPOT IT’S AN HOUR DRIVE THERE AND BACK AND I’M MAD!
DID I TELL YOU I WAS MAD??????
Now if I wasn’t so picky, I’d have just put it on and made it work and not let it bother me if my corners were glossy and I would have to throw away my roller if I couldn’t clean it, and, really, Carol, was this such a big deal???
Nope.
No, not really.
Because…
Because…
Brandon was in Worland visiting his honey, sweetie-pie, darling dear… and if I could get home and call him, he could go to Kennedy Ace Hardware which is a GREAT store, with helpful and kind people, that stock their shelves and love their jobs and BRANDON COULD BUY ME THE RIGHT STUFF!
And I’ll return this junk to that worthless lumberyard and get some of my money back…
And though all this rigamarole will put me a day behind on my plan, I’ll feel better.  I promise, I will.  I’ll take pictures too…
Find me here!