I snuck off of the ranch today to attend one more Spring Creek Raid meeting… this time held in what is now known as The Big Horn Stage Company.  This building is on the National Register of Historic Places and has been a hardware store, cafe, and general store.  The present owners have done great things with the place and I encourage you to stop by sometime if you get a chance.
I had a chance to visit with Uncle George Greet, 95 years young, about his dad and his recollections of being a witness to the Spring Creek Raid.  He admitted his dad and uncle never talked about it to “us kids”, but they would listen in whenever a writer stopped by to question the twins about this pivotal moment in Wyoming history.
I also must profess, in order to honor my mother-in-law, that some people still are extremely sensitive to this topic.  As a former history major, I found the SCR to be an interesting read… a piece of history, I thought, long over.  You see, my mother-in-law, who has passed away, was an Alexander.  Milton Alexander was one of the raiders… her grandfather.  Although she didn’t know him… her dad was greatly influenced by the shame, humiliation, and embarrassment of having a father in the penitentiary.  Milton Alexander was well liked and his conviction was very hard on his family.  Oneta was raised by a father that had to deal with that… and passed it on to his four girls.  If you mentioned the SCR to Oneta… the first thing she would tell you was that she had a copy of her dad’s pardon from the governor.  Many people still hope that this moment would just be forgotten.  Memories are long in the country.
I also informed the local historian about farm collies and English Shepherds… just because everyone assumes if they mention collie pups like this one… they are talking about Border Collies.  Not necessarily so!  Though the dog isn’t Lucas’ double… he does look sable… and I wonder… 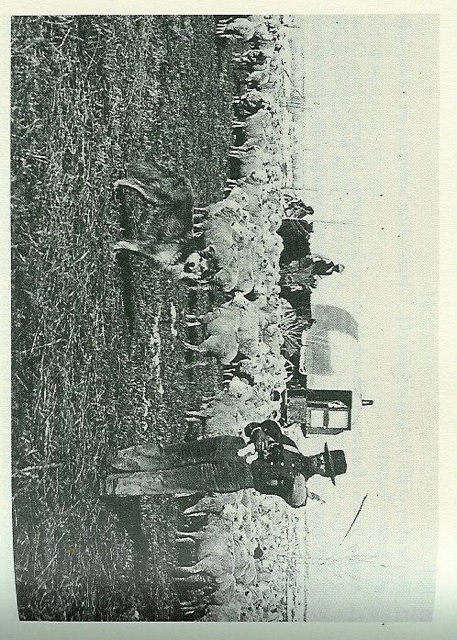