This morning dawned crisp but sunny.  The dogs were on alert hearing the semi’s tires grate along the frozen gravel.  Dally began a low growl as it rolled along the mile long road into the ranch yard.  Once within sight, her growl turned to a bark, and out of the yard she ran, Lucas and Elsa in tow.

I ignored their alert, preferring to sip my hot chai from my favorite cup.  The trucker was an hour early.  The brand inspector wasn’t due until 9 and I knew they’d have to stand around and kick the dirt before any action started.  I loaded my dishwasher and slowly dressed in layers.
Finally, I decided to make my appearance and the dogs and I were out the gate and off to the corral.  Dally and Lucas run ahead, happy as larks despite the temperature.  Elsa runs off perhaps 15 feet ahead of me, then returns to catch my eye, get approval, and run ahead again.
Sure enough, there are Vernon and Johnny and the truck driver, standing at the corral gate, leaning on sorting sticks and hotshots.  We greet each other.  Talk of the impending cold front.  Sniff runny noses.  Laugh.  Kick the dirt.  Hunch our shoulders against the slight breeze.  Look up as we hear the brand inspector’s pickup approach.
I take my sorting stick, hold it against her belly, and tell Dally to STAY.  She lays there confused.  STAY I repeat.  She then hears the pickup and gives a quick “wuf”.  STAY I warn.  She doesn’t move.  The brand inspector has parked and left his pickup before I release her.  She still runs over with a large “WOOOFWOOOF”.  Giving the alarm is her Job, and I doubt I’ll cure her of it, but I’ll keep trying!
With the inspector on scene we can begin loading the semi.  The trucker calls for eight heifers, and so it begins… the transfer of ownership of 45 young cows to their new home in southern Wyoming.  We have 50 left we’ll ship Saturday for the Riverton sale.
Heifers quickly and quietly loaded… papers signed and given to buyer, trucker, and us… stories told… dog heads patted… jokes laughed at… dirt kicked… pickups inspected… and handshakes all around.
It is this part that I treasure.  The honesty of the men.  The respect they have for jobs all around, the trucker, the rancher, the brand inspector.  The knowledge that the jobs they all do will be done with respect, and to the best of their ability, not because of pay, or because they have been told to do it that way, or because a law says so… but because it is the right thing to do.
Are they the salt of the earth?  Is it the cowboy way?  Yes.

It is this interaction that makes me very proud to live with these men in The Cowboy State. 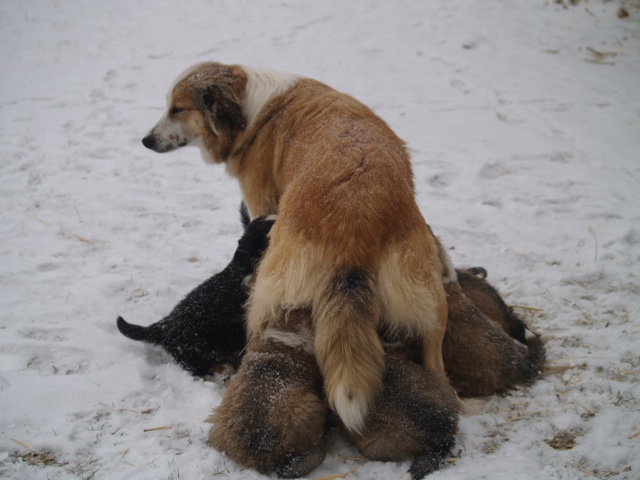