Yesterday, we finished weighing, giving shots, and sorting the heifers about 5:45 pm.  Daniel, my newly college “gradje-ated” son, had a meeting at 6:30 to renew his Red Card.  That means he can fight wildfires (and sometimes get paid for it).  He ran in, grabbed a sandwich and headed back out.  It does take a half an hour to get to Ten Sleep especially if you are driving a Firebird over the potholes in our mile long driveway.
Last night was the pack test.
Three miles in 45 minutes with a 45 pound pack.
No problem for Daniel.  He’s in good shape.  But.
But.
He worked cows all day yesterday.
In his boots.
Workboots.
Halfway to town, he thought, “This may not be a good idea.”
Too late to turn around… and they’d rescheduled this training to avoid his birthday… on he went.
The next we saw him, he was hobbling up my sidewalk.  Our initial teasing turned quickly to dismay.  He didn’t want to pull his boots off.  When he did, oh, my!  His heels were entirely bloody, the balls of his feet tender, but not raw.  All he could do was gasp and breathe and then call himself “stupidstupidstupid”!
I’m NOT going to take a picture of them.
Me, who has taken pictures of prolapses and cancer-eyed cows.  Me, who pulls huge disgusting warts out of cows’ ears, is going “ewwwwwwwwww” at Daniel’s poor feet.
I guess because he’s my boy…
We’ve doctored him up… wrapped and padded and sent him to work in his Dad’s tennis shoes.  It’d be nice if he could lay around and watch tv for a week, but like I’ve said, this is one of our busiest weeks, and he’s being a trooper.
Vernon and I had to do our bit and go help a neighbor brand a few calves this evening.  They come help us, so it was time to return the favor.  They use a calf table instead of roping and dragging to the fire like we do… we only had 18 to do… and it was done fairly quickly.  After they explained to me how the table worked!  Hey, I’ve never run one before!
So today, you don’t get disgusting photos of Daniel’s raw, bloody heels, instead here’s the view from our neighbor’s corral.  Believe me, it’s much prettier… although about the same shade of red, come to think of it! 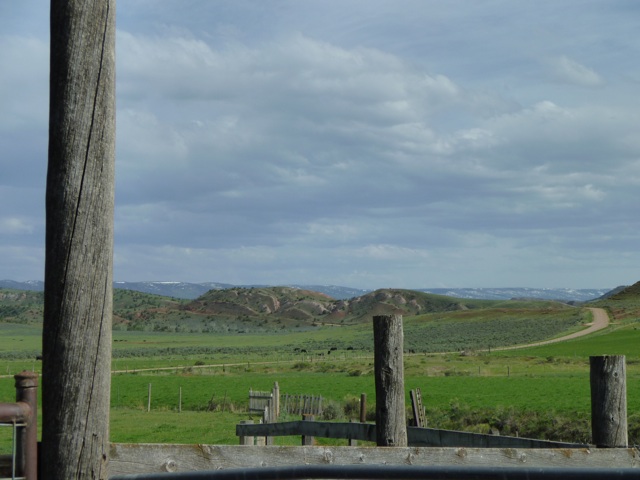