After my wreck yesterday afternoon, and then all the bawling I heard last night, I anticipated a big mess this morning.  It must have taken them just til this morning to find each other… because as we rode out, no calves or cows were in sight.  They had reunited and then took themselves to the Double Crossing where they were supposed to be.

I take it back… yesterday I called them stupid cows… this morning, they were semi-intelligent.
We trailed them up to the Mesa, and although the night had been cool, the heat hit us pretty fast.
I took both Elsa and Dally today, figuring they were both tired from yesterday and they could help each other out today.  Poor Elsa still has a pretty heavy coat though I’ve been brushing her.  I STILL cannot find my dog clippers, and she was warm!  I’m tempted to buy another set of clippers and just suffer the loss, whatever it takes to make them feel better!  There is no water along this trail.  They’d just have to tough it out until the pickup showed up with the water jug in it!
Elsa still goes out farther to pick up cows than Dally, and seems to be more in tune with me… though she’ll still bark more often than bite.  Dally, on the other hand, barks if someone else starts it, but she’ll get in and bite, and she’ll shut down if I’m yelling at the cows too much!  I’ve become a much quieter cowboy with Dally around!
They do complement each other and make a good team.  Today, though, the team took a hit.
Elsa had gone in to goose up a cow, which brings her close to the hind feet.  Dally went in for backup and the cow’s kick missed Elsa, but caught Dally who couldn’t duck out of the way because Elsa was there.  Dally yelped, shook her head and carried on, barely slowing down.
I tried to see if she was OK, and she seemed to maybe have a cut on her face, but it wasn’t bleeding.  This happened right before we climb the hill where we have to be on our toes and in constant motion to prevent the calves from running back, so I honestly didn’t look at it very good until we were done.  Not like there was anything I could do anyway!
Sure enough, the little girl caught a good whack below her eye.  It scraped all the fur off just like she’d been shaved!  No bleeding was involved.
She went from this last week… 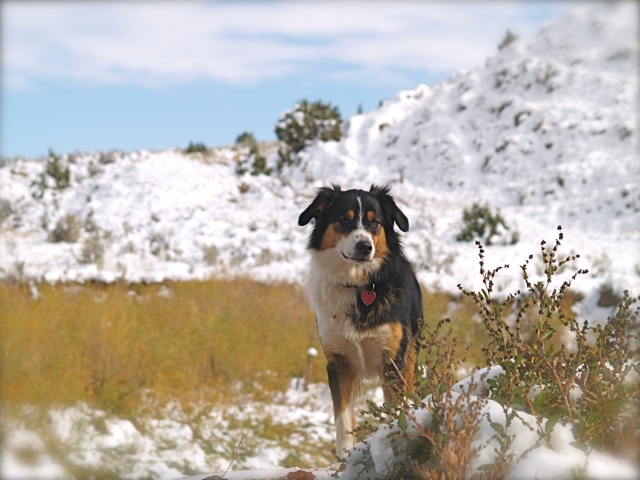 to this today…  The yellow tinge is from some medicine I put on this evening, which she promptly rubbed off. 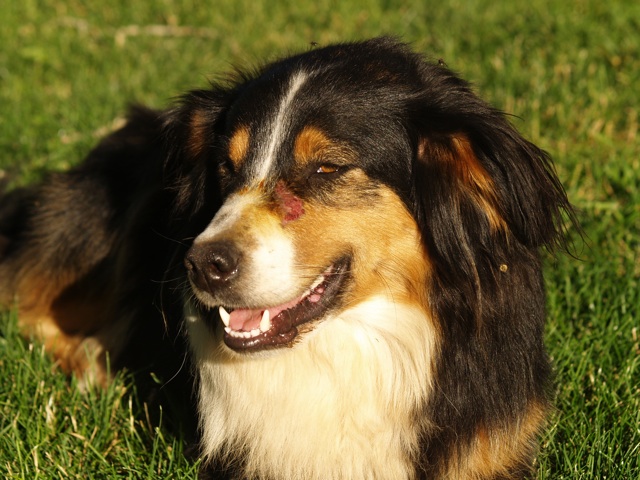 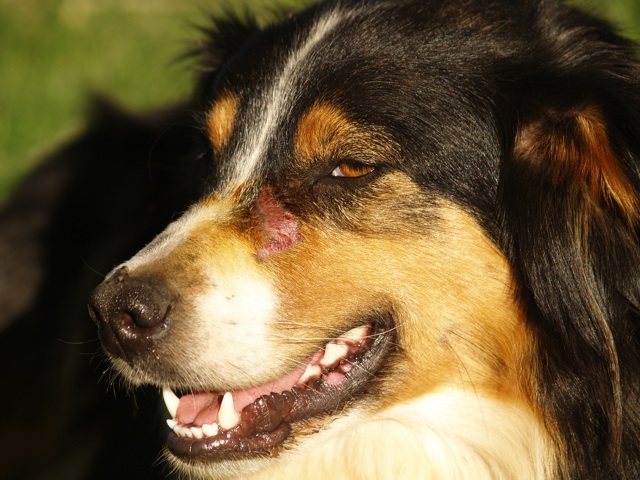 Ahhhh.  Don’t worry.  She’s OK.  A tad tender.  Such is the life of a cowdog!  You work around livestock, you’ll get battlescars!  At least this is legitimate… not like getting hit in the head with an axe!
Find me here!