The darkness swirled around us, a few clouds reflected the half moon’s light.  The horses shuffled and grazed, dogs wagged and panted, and people talked in quiet tones, matching their words to the early morning.  Baby blue appeared in the east, lightening the sky tones and beginning to wash out the visible stars.  Expecting the brightness of sun, we finally could see what was overhead.  It was not clear sky burning away to daylight… but dark clouds building with rain.

As soon as it was light enough to see, we swung into our saddles and set off up the fenceline.
We had all expected brilliant rays of sun and 90+ degrees.  It was looking like it was going to be 70 degrees and rain.  Lots of it.  We had no slickers.  <sigh>
The coolness urged the cattle onward and they traveled fast on the well known trail.
It finally came, spits and sputters of raindrops at first.  The temperature dropped and the wind picked up.  It didn’t take long before I had a chill.  The clouds came in as well, and began to cover the landscape in grey curtains.  Up ahead, a rider appeared… and I squinted.  What was he carrying?  As he drew closer, it became obvious and the five of us cheered “Slicker Man”!  Daniel had been at the front of the herd, raided the pickup, and was bringing five slickers back for us.  Thrown over the neck of his horse, they flopped in the breeze, but Rooster was unfazed.  “$50!” Daniel teased as he dropped them on the ground.  “Put it on our tabs…”  We grabbed our slickers and continued on slicing behind the cattle, kicking them onward.
The rain backed off for a half hour, but then returned with increased wind.  Yesterday I had sweated in the heat, today I was freezing with rain and wind chill.  I had no gloves and my slicker was beginning to leak.  I obviously need to reproof my Aussie drover raingear.  I pulled a scarf from its pocket, at least the rain wouldn’t whip down my neck!
Luckily, the frigid blast didn’t last too long… and the predicted sun did appear.
We took the time for lunch and did the final push after we had eaten.
We made excellent time, one of the fastest and easiest and coldest (but not the wettest) trips to the mountain! 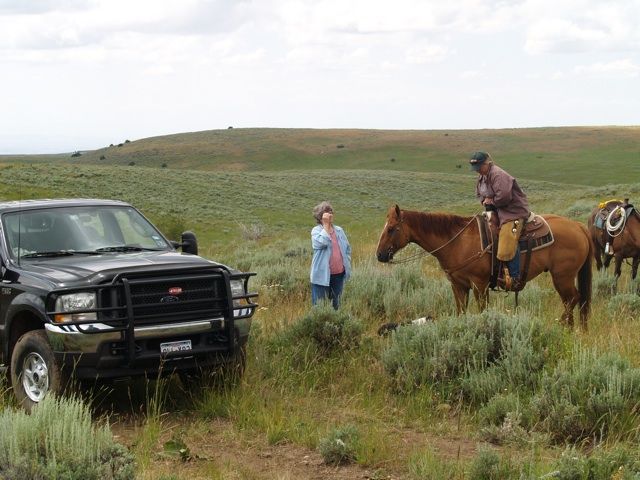 Vernon took this for me… that’s me on the left with two dogs at my heels.  We work hard along this stretch trying to keep the cows from going into the bogs along the little creek in the left of this photo. 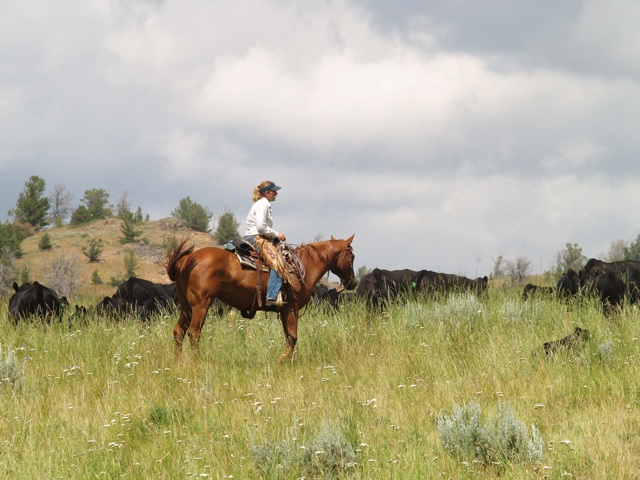 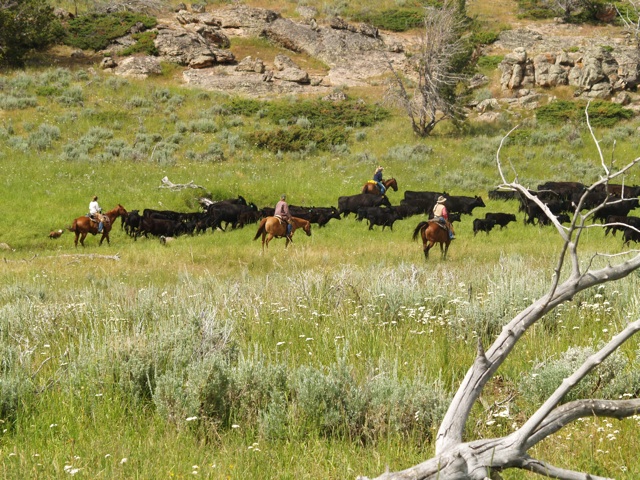 Brandon takes a break as well… 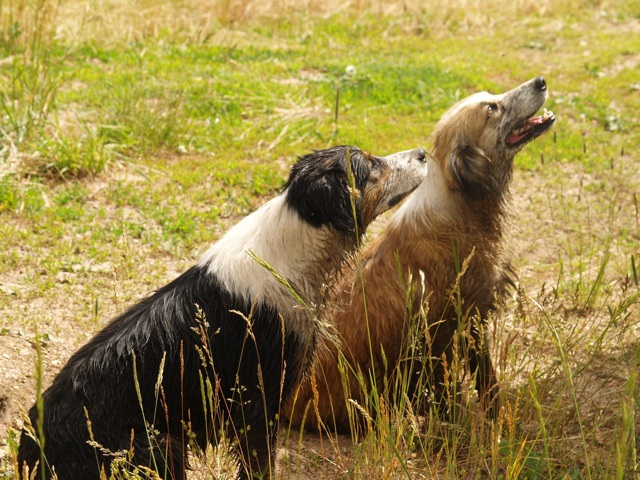 What makes a cowgirl happy?  Her Dally dog, her dun, and the Dodge!
Find me here!