We were supposed to be back to thrashing the grain after our buckaroo interlude… but a small rain shower cancelled those plans.  Wet grain can’t be thrashed.  The guys headed up the mountain to put out salt, repair some fence, and check on the cows.  They took a lunch.

That means…
That  means… I don’t have to cook lunch HERE and I’m free for the day!
YYYYYYYAAAAAAAAAAAYYYYYYYYYYY!
I was going to work on my bathroom construction project, but hey, if I’m free, I’m outta here!
Ever since I had decided to put fossils in my bathroom… I’ve wanted to go to Big Cedar Ridge.  Well known for its Cretaceous vegetation, I was ready to rediscover this place!  I supervised a Girl Scout/Boy Scout outing at this location years ago… the BLM guys just turned us loose with hammers and I remember the kids finding multiple samples.  I was hoping to be as lucky!
I don’t need much, but I had in mind what I wanted… a single leaf fossilized… pristine… 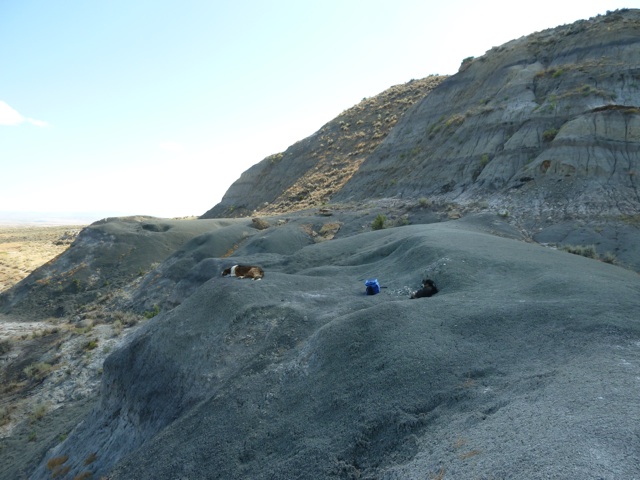 73 million years ago… this area was covered in vegetation… a fern wetland, a palmetto thicket, and a streamside thicket.  Volcanic ash quickly covered this area… like a plant Pompeii…  That’s the ash tuff you see.  It has a popcorn texture on the top, you can stick a screwdriver into it with almost no resistance. 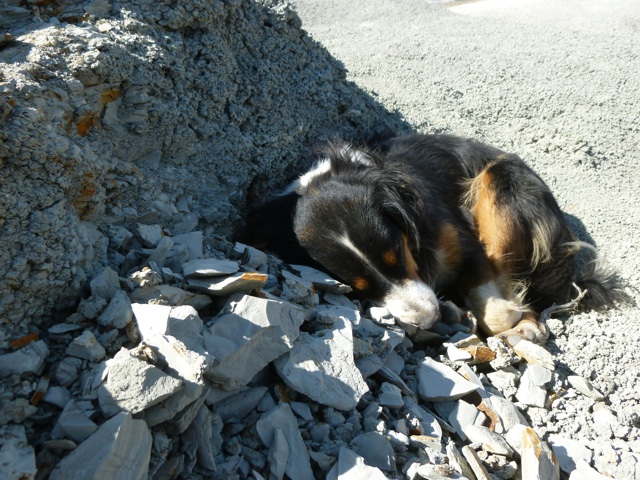 Oh, look!  A furry fossil!
No collecting of vertebrate fossils allowed!
Although I KNOW this is where the Girl Scouts were sent to dig, I had no success at finding anything.  Hmm.  I could tell someone else had been here recently, and so I followed their footprints. 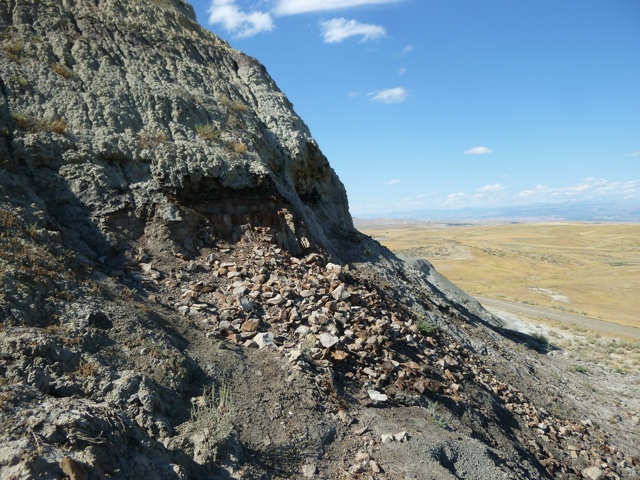 Around the end of the eastern edge, I found this spot.  I don’t know what those people were looking for, but I don’t think they found it!  Quite a bit of “debris” had been tossed down the hill and I squirmed a seat on the rough pile of rocks and picked up a stone.  I tapped it with a hammer and voila! 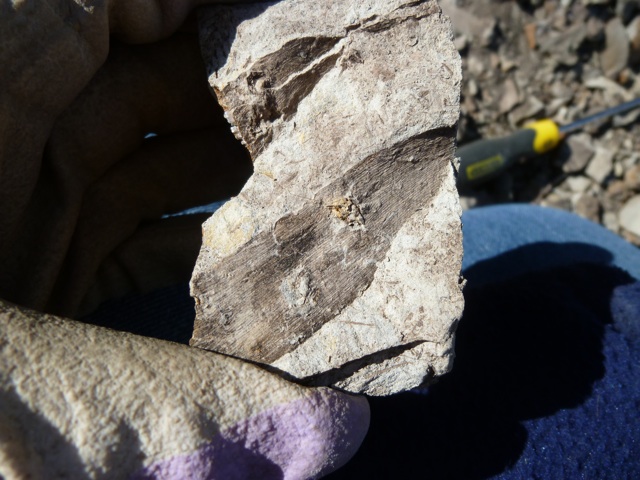 A fossil leaf!
Those people had tossed a ton of fossils down the hill and I excitedly picked through their trash!  That just must be the archaeologist in me… I love antique trash heaps! 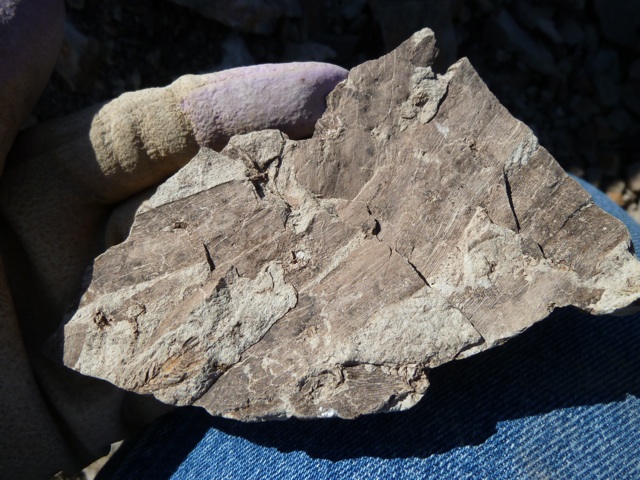 Amazing!  This was a compost pile!  Look at all the leaves!  My favorite, though, is the pine needles in the lower left side. 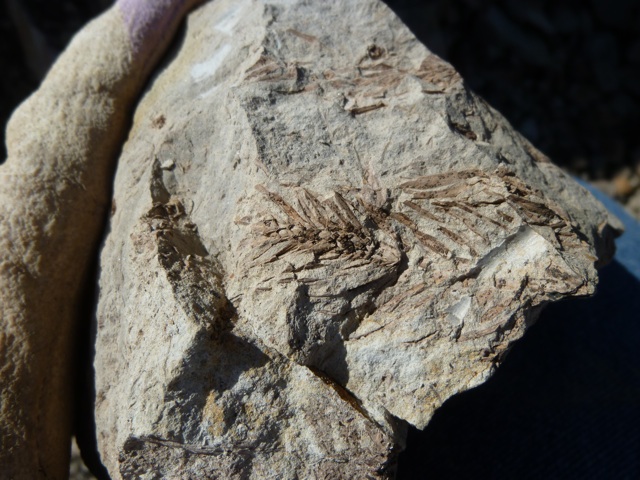 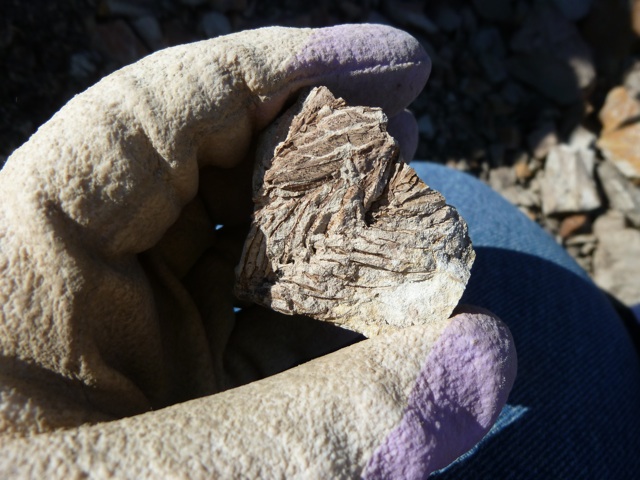 Lots of details in these needles.  I didn’t take a lot home… my single pristine leaf didn’t appear…
I know they are out there… I’ll just have to go again! 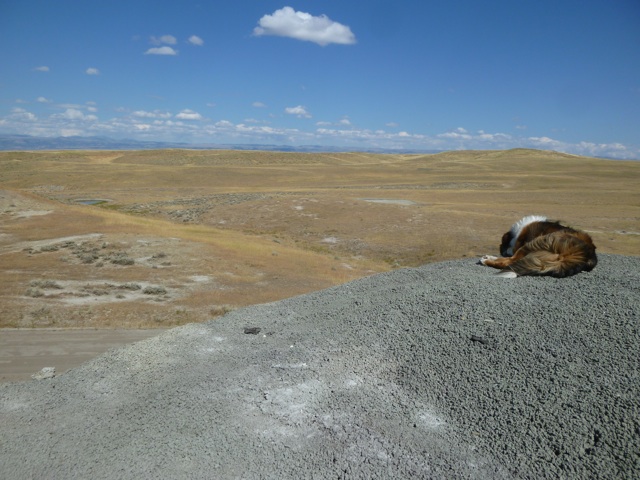