If you’re a fan of “It’s the right thing to do and the tasty way to do it.” welcome to *your* blog entry!  Because for most of you out there, Wilford Brimley excepted, I’m sure… you’re not sure what oats look like before it gets into the Quaker Oats round box or those little packets of instant oatmeal… I love the Raisin, Date and Walnut myself…

For the record, I am a fan of Mr. Brimley… fellow Wyomingite <just down the highway an hour or so>… great western actor… and humanitarian <see here>.
This is the story of oats in the fields, before it can get processed and into those boxes!  Well, no it’s not…
Our oats are used for feeding our cattle a little bonus protein during the winter.  We don’t grow “people” oats.  We don’t feed rolled oats either, it’s just the kernel, ground a little… but it does taste the same, just *crunchier*!  But you’ll get the idea… 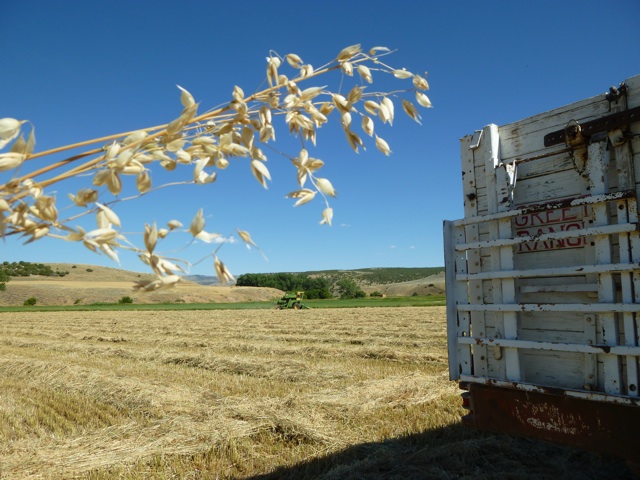 Our grain has been cut and is laying in windrows.  The heads or florets grow individually on the stalk…. I have five or six stalks in my hand to show up better. 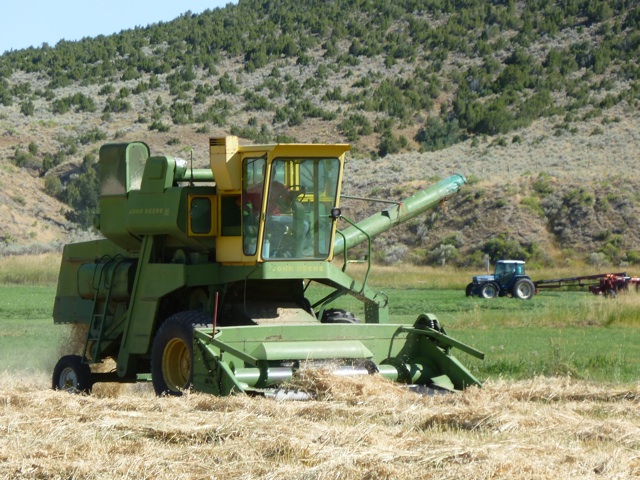 Our combine is OLD and “it’s, it’s, it’s, …GREEN!”  <Say that with a Scottish accent… and kudos to the first person that can tell me what TV show that quote is from!>  Look, I had two sons, and there they are at work “together”… Brandon in the combine, Daniel with his discbine…
The grain is picked up and separated… the grain going in the hopper, the chaff is blown out the back into grainless windrows.  Later, we’ll come back in and bale the windrows… making nice clean straw for bedding during winter and calving season. 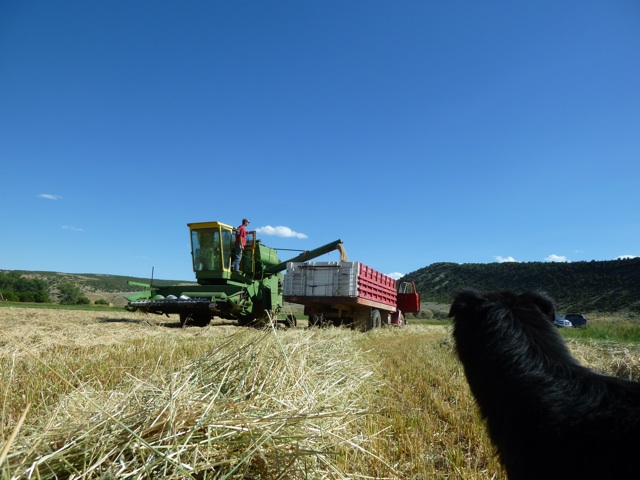 When the hopper is full, we stop and unload it into the truck.  Brandon and Boomer keep a close eye on the process. 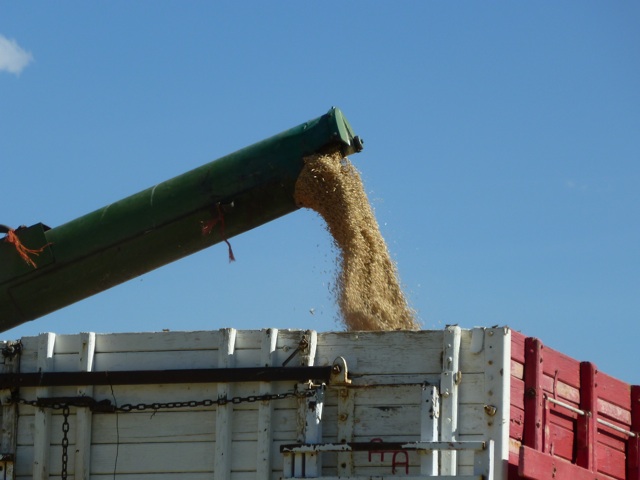 The grain is augered up and out of the hopper.  When the truck is full, we drive it to the granary, and auger it into the granary. 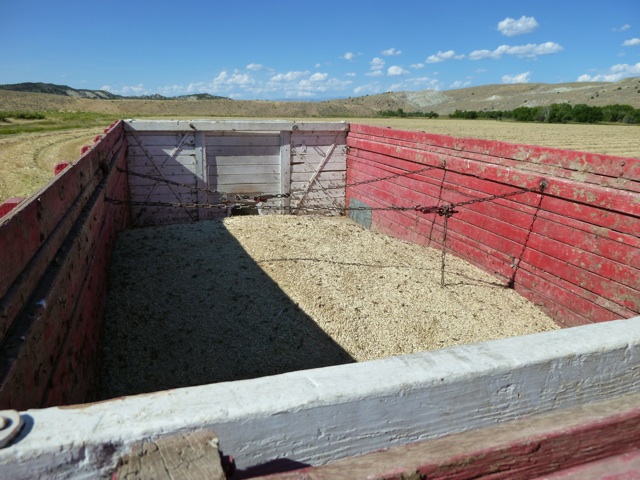 It takes a few hoppers to fill the truck. 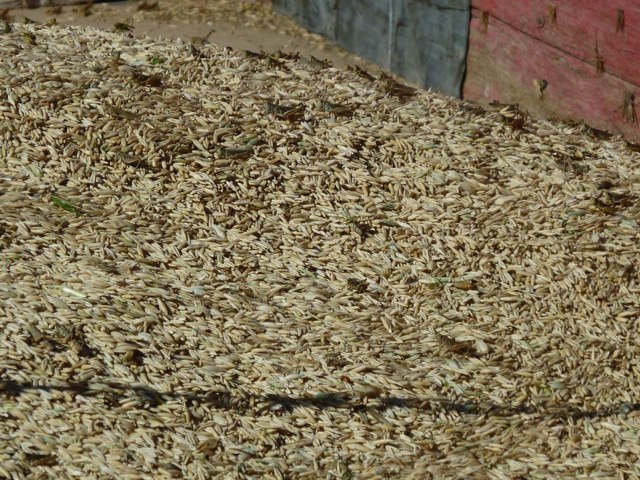 Speaking of hoppers… yes, it has been a fantastic year for grasshoppers, why do you ask?  No, we don’t worry about them… think of them as a little extra protein for the cattle!  I’m sure Quaker Oats does worry about them… so don’t stress yourself, you’re not eating grasshoppers in your oats! 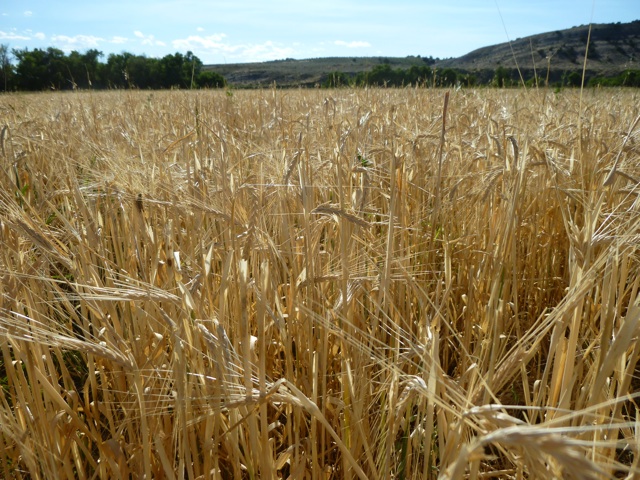 We also thrash our barley.  Again, it’s feed barley, not beer barley!
Have I told you there is a barley named after my uncle?  There is!  He was an amazing man, who often joked he wanted a bridge named after him… He poured a concrete crossing in a creek and inscribed his name in it… thinking that was all he’d ever get!  But a lifetime of being a research entomologist at Oklahoma State paid off… and colleagues voted to name the new barley after him!
Barley looks totally different from oats. 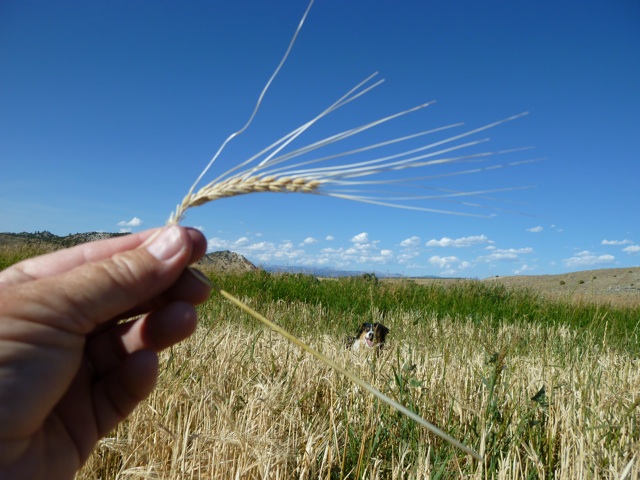 The process is still the same… and, I’m sure there’s no grasshoppers in your beer, either!
Another sidenote… Many farms in Wyoming grow malt barley for Coors… and some for Budweiser as well.
So tomorrow morning for breakfast, have some Quaker Oats on me… and lift a cold one tomorrow evening for the farmers of America… then dig into that nice juicy tender steak and thank a rancher… you’ve now learned a smidge of where some of your food starts!
Find me here!