Last week, a friend told me a story…

They live alongside a small creek dotted with stately cottonwood trees.  In the wintertime, it’s not unusual to see a bald eagle perched among the bare branches.  Sliding along their long snowy driveway, they noticed a bald eagle on the ground, perhaps it had a rabbit or other prey, but it wasn’t moving.  Stopping the pickup didn’t frighten the eagle.  Walking towards it didn’t frighten it.
Living in the country you know one thing causes bizarre animal behavior… illness of some kind.
In the words of my friend, “I thought the eagle was toast.”
People forget that most wildlife live long lives… and the end comes for us all.  As ranchers, we’re not out here to wipe wildlife off the face of the earth in favor of cattle, no matter what some radical groups would have you believe.  We try to let Nature take Her course… nevertheless, it *was* a bald eagle… and a call was made to the local game warden.
The game warden arrived in short order.  He, too, thought the eagle was dead, but an eye blinked at him.  The eagle was standing… but frozen in place.  Literally.  The game warden, gloved and protected from the sick bird by a drape, broke it loose from the ground, it’s taloned claws and feathers stiff and stuck in the snow.
Placing it gently in a donated dog crate, he thought the chances were slim for survival, but he’d turn it over to the “local” bird rescue in Cody.
That was almost a week ago… and now “Snake” was coming home.
“Snake” had an attitude problem.  She, yes, *she*… hissed constantly.  She was not a happy camper at the bird rescue.
Originally, they thought her problem might have been lead poisoning since one symptom is the curling up of the claws.  Snake had to undergo 6 shots per day for four days… and that didn’t help her aura.  The blood test later came back negative.  Snake probably had been just a little low on groceries when the cold weather hit, froze the creeks back up, and it sent her into hypothermia.
Now she was thawed back out and returning to her home, Bad Attitude and all.
That’s where I got to come in…  the “unofficial photographer of the Upper Nowood.” 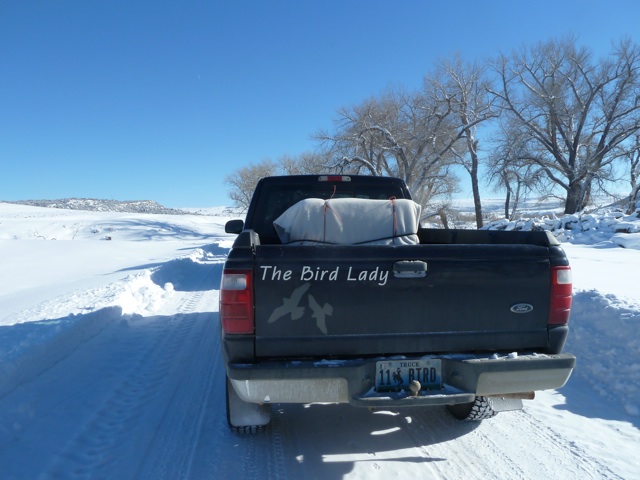 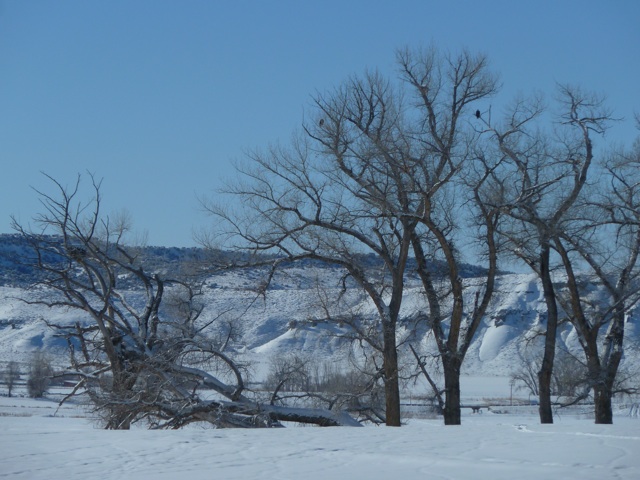 Waiting in the trees… Snake’s mate (sorry, but I had to name him Bake) and possible yearling chick. 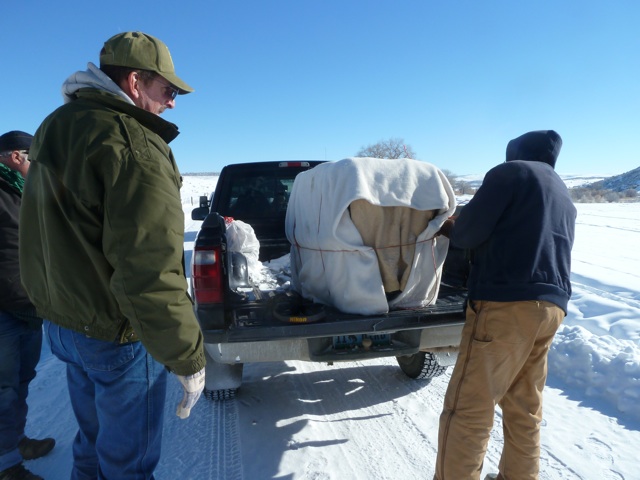 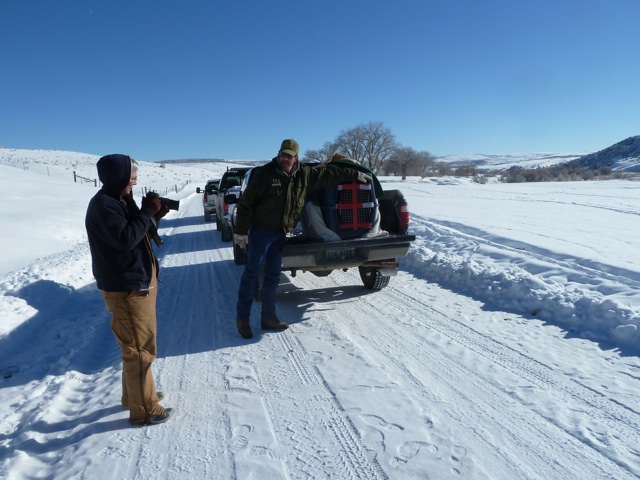 Cameras ready…
Mine was not… I wanted to take TONS of photos and I hadn’t even broken out my BIG camera yet… wait, oh, wait.
Oh. 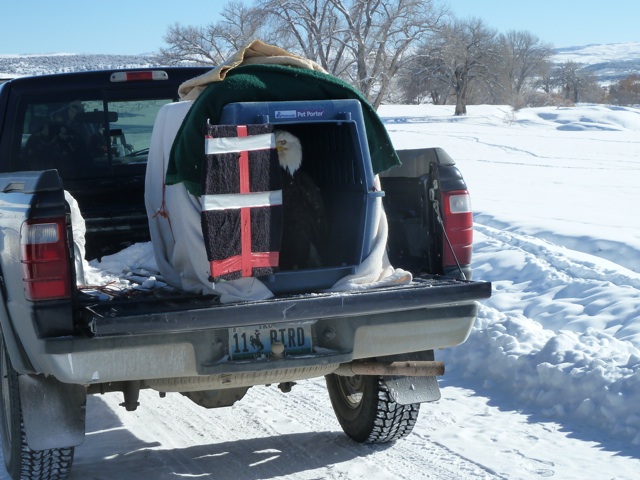 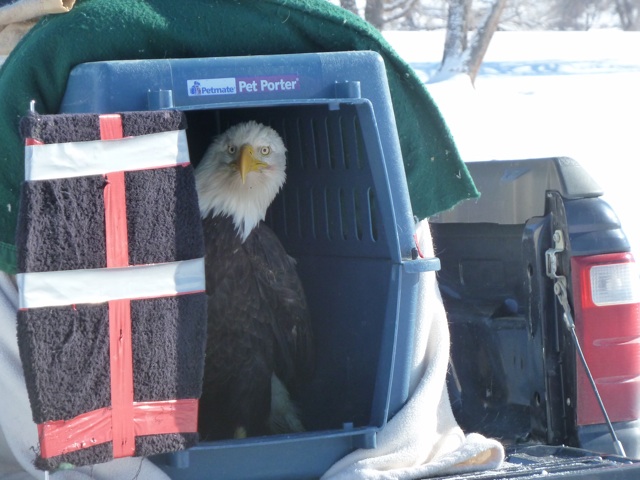 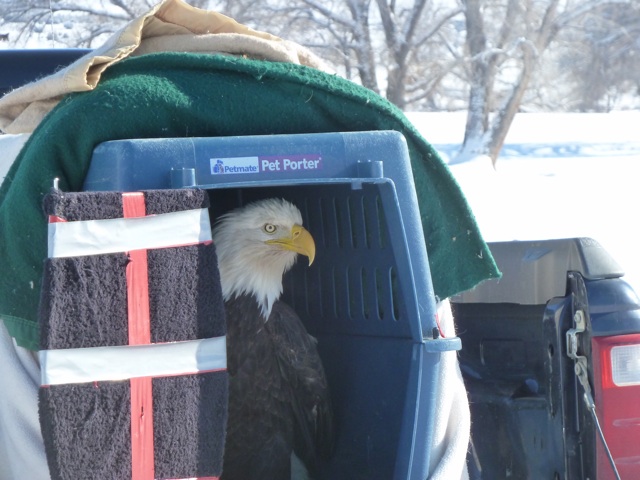 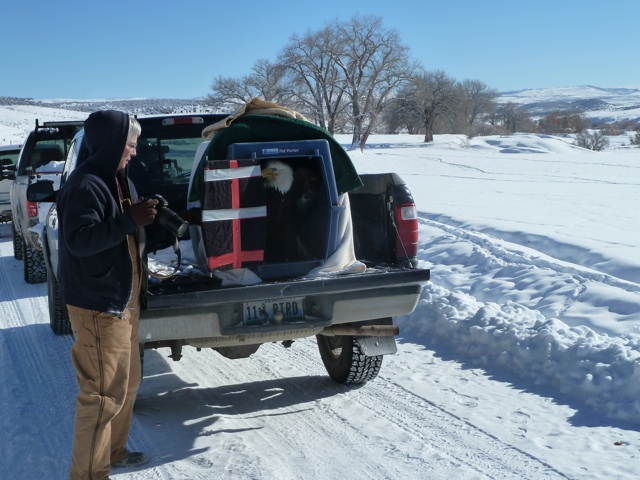 And Snake is SHY as well. 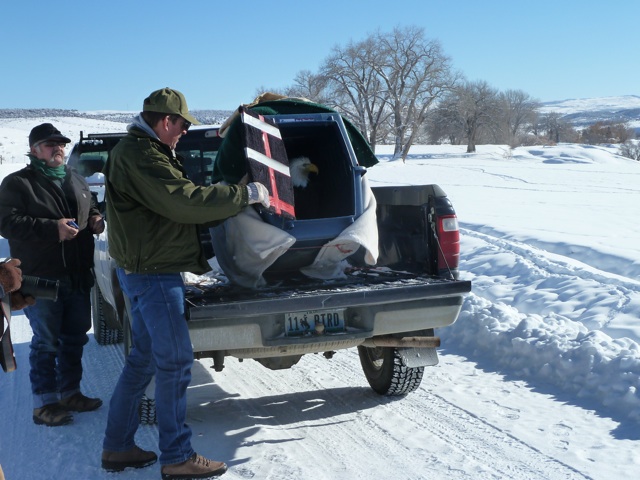 Note to self:  When you need to have an eagle leave a dog crate, you tip the front of the crate UP not the back… just in case I ever have to do this on my own…
But my suggestion…
Leave it to the Professionals.
I’ll just take pictures. 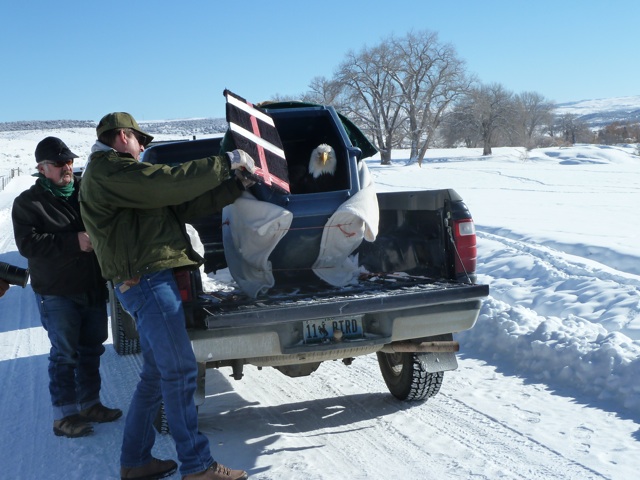 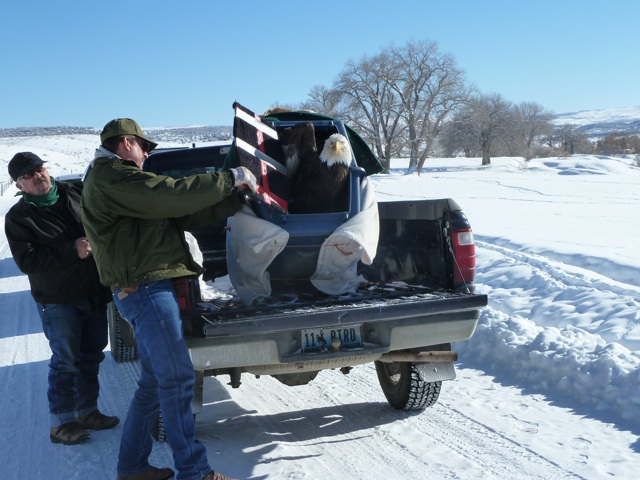 This is my favorite photo…
Just a split second later, Snake was OUT and FLYING and I quickly switched to video…  Which I shall post tomorrow!
She flew to join her family… 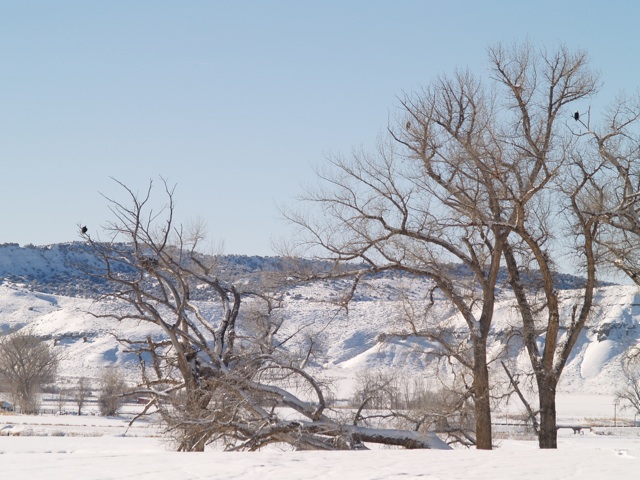 And hopefully… Snake and Bake and Chick will live many more years…
And I helped!  <name that commercial!>
For more pictures of Snake visit Ironside Bird Rescue out of Cody.  Thanks to the Wyoming Game and Fish Department.  Thanks to my friends.
****
I’d like to put out a special link and appeal for our friends in Australia.  I can’t cover it fully now… but please check out my friend’s blog… and help if you can.
****
January 13, 2010   No entry.
January 13, 2009   Playing in the Snow
Find me here!