Daniel and I made a flying trip to Billings yesterday.  He’d have rather done *anything* else… but he made the proper decision to have his wisdom teeth pulled.

Poor guy.
He’s puffy and definitely not his cheery regular self…
Been there/done that.
I had little over an hour to kill in a city with manymany possibilities.
Oddly enough, a good friend was also in Billings for the day, so we met up and hit an antique store.
I mean we *went* to an antique store.
If we’d actually “hit” one, either her car would be damaged or we’d be under arrest for grand theft.
One of these days, I’ll let myself buy something…
There were no Blue Willow pieces there that I fell in love with.
There were some early Terhune books there… and I debated about adding them to my dog library… but passed.
There was some gorgeous furniture, secretaries and map cases and things with multiple drawers… but the prices made them easy to pass up.
There were multiple pitchers and tea pots… and oooooh! I debated on a few of them… but I haven’t quite decided that’s how I want to decorate my kitchen.  But I’ll be thinking of that burnt orange pitcher for months…
There were NO Victorian paintings with English Shepherd type dogs in them… so my “collection” still stands at two.
No big living room paintings of cowboys or Indians or scenery that would work in my living room.
BUT!
I did get a Grand Idea for one thing to hang on the wall… and if it works out, I’ll certainly share!  Which reminds me, I *must* show you my finished entertainment center.  Almost finished.  I haven’t installed my infrared remote so I can close the door/drawer… but I’m working on it…
We left there and made a short stop at the local organic/glutenfree/vegan/localgrown grocery store.  That was an experience and eye opening…
Really?
Vegan sloppy joe mix?
That one struck me as hilarious.
I mean, I don’t care if you’re vegan.  But aren’t sloppy joes hamburger/seasonings/tomatosauce?  If you don’t use meat in there… don’t you just have seasoned tomato sauce aka tomato soup?  I’d try it given the chance… but since I’ve lost my sense of taste… it wouldn’t be worth the money!
And the organic beef?  $5.99/lb for cube steak.  $12.99/lb for New York strip.  It was thin and unmarbled and unappetizing.  I wish ranchers could get $12.99/lb.  Ah, well… it’s interesting the way the world works!
Too soon the call came that Daniel was ready to be picked up… and my friend and I parted ways.  I loaded Daniel up, bought him a milkshake in the Hardee’s drivethrough and we were off for home.
Eight hours in the car… blech.
We were both very happy to see the Red Dirt of Home. 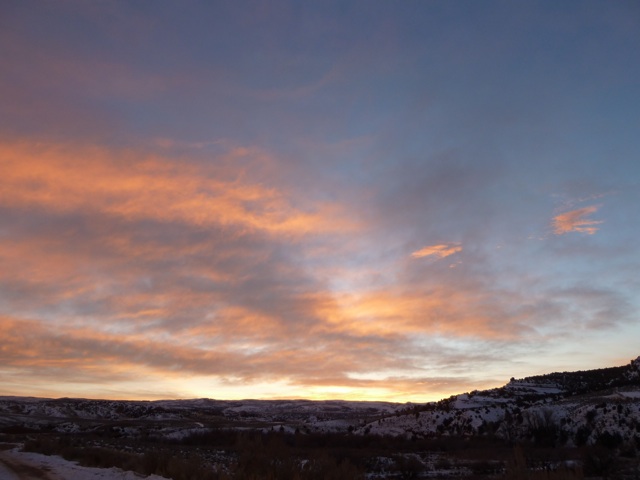