We’ve had the babies, weighed, tagged, earmarked them and cleaned up the mess they made during the birthing process.
Now it’s time to kick them out!
If we have time and space, we’ll let them stay in their pens, but like yesterday… we were cranking babies out and needed each pen we could get.
We had 11 heifers calve yesterday, so we kept busy doing all of this plus our regular feeding schedule, plus the cows are calving as well, so that means a spin through them just to make sure *they’re* not having problems.
We have two pastures with the calving shed in the middle.  So pregnant heifers are on one side… new mommas and babies on the other.
We make a point to get them far away from the creek, we’ve had babies fall in and die from exposure.  Once they have their sea legs it’s different, but newborns stagger and can’t figure out how to manage obstacles very well!  So we feed far away from the creek, and let mommas walk to get a drink… they’ll leave their babies behind to do that.
Now… poor little things have been born for 4-6 hours and here we were, needing their pens and getting ready to put the remaining heifers in the little pen as well.
We pair them up and walk them out into the slippery mud, crusty snow, and mudpuddles!
Newborns walk with a hunch in their backs, and almost on tiptoe like an 8 year old after her first ballet class.
In other words, not very gracefully.
Mommas are nervous and I give them plenty of space unlike the guys that just barrel ’em along.  I figure if a thousand pound critter wants to get upset, I want to be as many steps in the lead as I can…
Of course, I forgot to upload my movie today, otherwise you could hear the cow talking to her calf.  The soft “mehhh” they give to their calves turns to “maaaahuh” when I’m shoving their calf through the snow.
Thankfully, calves come with an easy handle… known as their tails.
You can skoosh them along by scratching along their backbones, or pinching above their tails, or grabbing that handle and pulling backward.  Sometimes, they’ll pull back and thus proceed forward.  Sometimes, they just stop.  At which point you lift the tail forward and you can get the rear end to move in some direction.  Probably not the direction you wanted, but work with it.
Sometimes, they just lay down.  It’s too stressful.  They can’t walk.  They quit.  Usually they quit in the middle of a mudpuddle at 4 pm, so there will barely be time for them to dry off before the sun goes down and they are chilly all night.  At that point, you can try to manhandle them into a standing position, but it’s like trying to pick up a drunk.  It can’t be done.  Legs go different directions.  Bambi on Ice.  Instinct says curl up and hide.  You’ll end up getting them wetter than before, so just forget it, grab a leg and haul them over to the dry straw and leave ’em.  Or better yet, have one of the guys do it.  And keep an eye out for that thousand pound momma.
Whew.
Sweating yet?
You’re done with that pair.
Time to get another pair out and send them across.
No wonder I slept good last night! 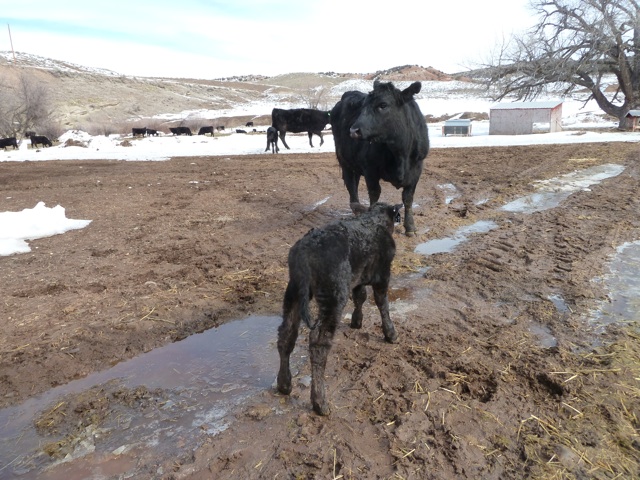