Her performance/discussion was lively, interesting, and enlightening.
However, since we’re on Day 349,710 of RAIN… only 11 people showed up.
We had originally planned an ice cream social on the lawn outside the library.
Monday, we were smart enough to figure out that was probably NOT a good idea.  We switched to cookies and coffee inside the library.  Tonight, we just figured everyone had to hunker down because of the rain.  Wyomingites are not used to moisture in these amounts.  People must assume they will melt if exposed to such rain, though I admit, most people in Wyoming are not quite that sweet.
Perception vs. reality.
Or something like that.
I’m probably in big trouble right now.
That’s a JOKE, son, just a JOKE!
On my way into Ms. Bell’s performance, I was reminded of a creative Wyoming soul…
On the backside of Pathfinder Reservoir lived some tough pioneers.  Living where water is *usually* a rare commodity, this guy got creative.  He lived at the base of an outcrop, not that far from the same outcrop dubbed Independence Rock.  When those infrequent rainshowers appeared, a large amount of water ran off that humongous slab of stone.
He hand drilled holes in that stone, and tapped in pegs every 6 feet or so.  Laid on top of those pegs were some 1x4s, perhaps a foot or two off the ground.  A seal of tar extended between the boards and the rock, a waterproof barrier to capture every drop he could.  The boards angled downward into a funnel which led to his cistern.  Every rainshower brought more valuable water into his underground tank. 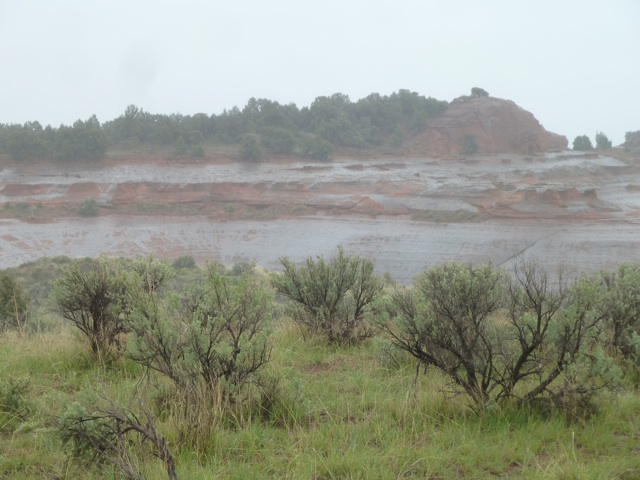 I remember seeing this setup when I was a kid… walking along, figuring out bit by bit what he had accomplished with basic tools and ingenuity.
You cannot help but admire those people, the unknown pioneers and Calamity Jane…
They were independent and creative characters that carved out this land.
I hope someday, we can be admired in the same vein… but, I feel, we’re not even going to come in close…
****
May 20, 2010   Wildflowers
May 20, 2009   Wordless Wednesday – “Patriotic Evening Primrose”
May 20, 2008   No entry.
Find me here!