Thanks, everyone, for your well wishes!  We made it through the day yesterday… though, of course, it couldn’t be simple or easy!
Vernon woke me at 4 am, insisting Dally was going to have her babies.
I rolled out, checked on her, and didn’t see anything too unusual, just her heavy breathing and uncomfortability!  I remember being like that myself a LONG time ago.
I went back to bed, but lay there awake… 45 minutes later, I’m checking on her again.  Then 45 minutes after that.  Then, I crawl out and get ready for work.  It’s my last day at the library until fall… my boss is in Cheyenne for a training… and I am supposed to open.  15 minutes before I leave, I let Dally outside to do her business.
So, 15 minutes later, she’s nowhere to be found.  I have to go to work, but I leave messages every half hour for someone to listen… but everyone’s vaccinating our heifers since we’re AI-ing.  I suffer through the morning, wondering where she is… if it’s raining or if she’s in a mud pit… and if a storm blows through with thunder and lightning… she’ll be one scared little girl.  I’m extremely frustrated!
Vernon calls at lunchtime.  Brandon found her in the used tire shed, but she won’t come out.  She’s *definitely* gonna have her babies.
Now what?
What else?  I text my boss and beg to be let go early, I’ll make it up sometime!  Thank goodness she agreed, or I think I might have imploded!  I fly home.
There’s my girl, in a not so comfy little damp hollow she scratched out in the tire shed.  She’s covered in red dirt. 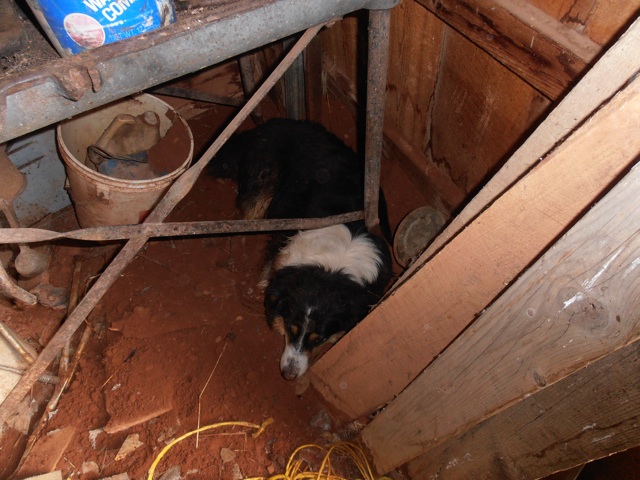 She won’t follow me, so I grab some baling twine, and *insist*.
We waddle back to the house… and she settles in again.
I can’t be a helicopter owner… it’s Daniel’s birthday and I have birthday supper and a Baked Alaska to finish.  There are people coming over and I just have time to snap a shot of the poor little thing as she lays there being miserable. 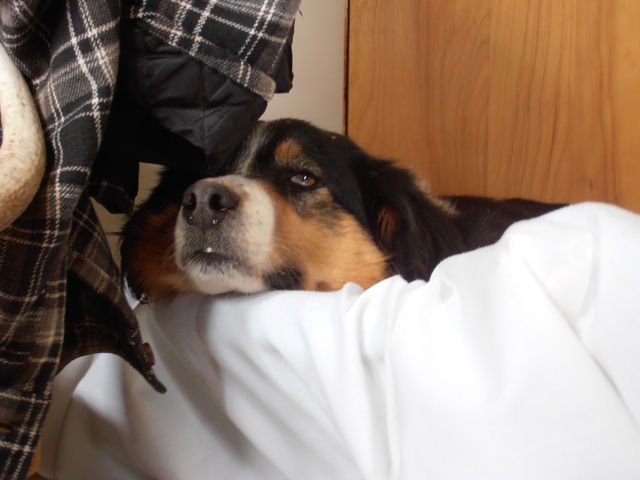 She’d hide her head in the coat sleeve… reminding me of the drama queen who throws her arm over her eyes in exhaustion.
Pork chops are grilled, salad tossed, potatoes mashed, and Baked Alaska sitting in the freezer.  We have a good little party for Daniel (he’s 23 now!)  and as people start to leave… Dally gives a painful yelp, stands up, and Pup #1 arrives.
It’s a girl.
and another and another and another and another!
#6 and #7 are boys… followed by two more girls.
Girls Rule!
Between 10 pm and 3 am, she delivered 9 healthy tricolored pups.
She and I were both exhausted!
Actually, I gave up at 2:30 thinking she was done… but found #9 the next morning!  Which was this morning.  Which is why I can’t think straight! 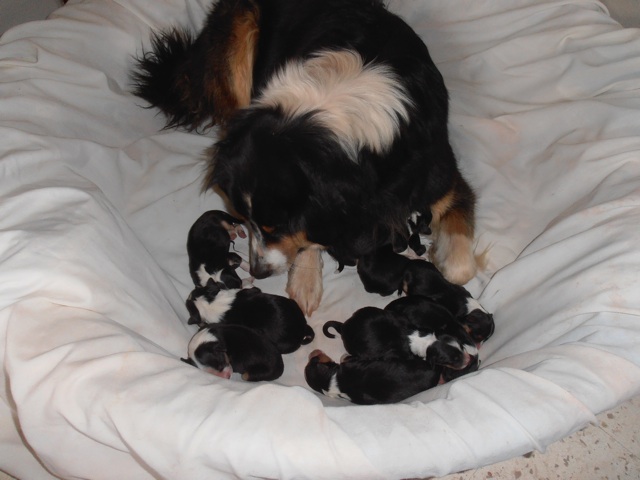 Don’t they look AWESOME?
Everyone has just enough of a difference in collars and blazes, that, yes, I CAN tell them apart!
Tomorrow I’ll introduce you to them… did I stay with my plan of Wyoming names for the girls and Nebraska names for the guys?  Or did water names from the flood trump the original plan?
Stay tuned… don’t touch that dial!
****
May 26, 2010   Redneck Birthdays
May 26, 2009   A I School part two