The job today was to gather and bleed our heifers.

The morning was spent gathering them from their pasture and trailing them home.  We had a bit of difficulty there… we have a creek crossing that they just can’t hit.  It’s built like a sharply turned fishhook, down into a cutbank, and then across the creek.
It would help tremendously to have a short fenceline there… so we could turn them back down the road and they wouldn’t squirt through the boxelder trees.  It would only have to be about 25 – 30 foot long… just enough to keep them from escaping back the way they came.
Anyway, we did manage to collect them all and get them home…
We grabbed a quick lunch and went back to bleed them.
This is something we haven’t done before.  Since we AI our heifers, we’ve always wanted to see what our success rate REALLY was.  Before, we kind of estimate according to their birthdate, but there was a grey area.  It could have been a late calf from AI or an early one from the bull.  Instead of DNA-ing them, we thought we’d try this.
But the preg test requires blood.
With cattle, there’s two easy ways to get blood… through the jugular or through the tail vein.   A large vein runs on the bottom side of their tails… and that is what we were shooting for!
Like I said before, we haven’t ever done this… We all gave it a *shot*… but Brandon turned out to be the best of us.  He also had had a little experience at school…
No, no pictures.  Not today.  I held the tail.  It’s amazing how strong those tails are!  Plus I wrote on the vials of blood for the lab.  There was no way I was pulling out my camera with poo and blood everywhere.  Well, I did, but that was only when we just HAD to take a break, it was unbelievably HOT next to that chute.  I about made myself sick!  And I had, somewhat, cleaned off my hands. 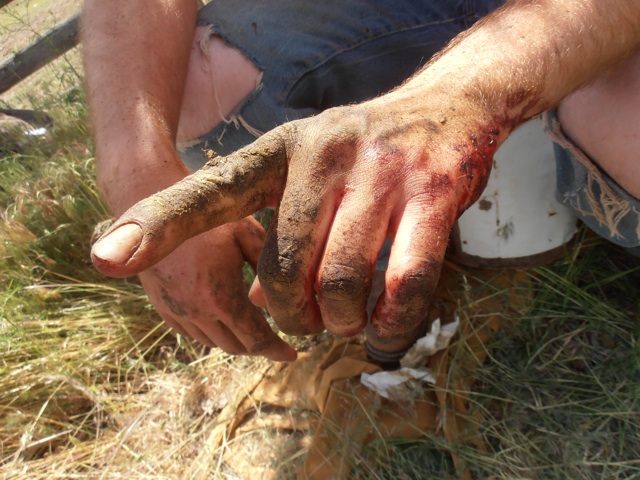 To pull blood, the tail has to be lifted up, so Brandon can see the center, which he pokes with a two sided needle, which then fills up a testing vial for the lab.  Those girls would yank on their tails, move up, move back, shove sideways… and I expected at any moment to break my arm!
Plus take in the location.  Yecch.  Plus blood from veins…
I stink right now.  A shower is next on the list.
Yup, looking for that Advil bottle, too.
The poo, the blood, the dirt, the heat… all lead to Brandon’s quote of the day… “Bloody hell, this is a sh***y job!” 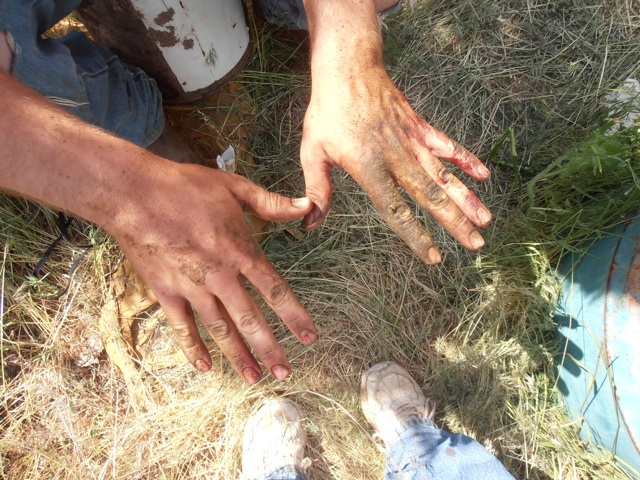