The canyon sent up shimmering waves of heat, convenient for the dark turkey vultures that rode in tilting strides on the thermals.  Though the sandstone was a well worn and faded white, heat bubbled off its 500 vertical feet as the morning sun hit its western wall.

Sitting in the crushed weeds, I watched as the two birds lifted and soared, their slate colored shadows fleeting echoes on the stones below.  Smaller birds made nervous passes above, below, calling warnings to unseen fledglings.  A golden vested meadowlark sang his song often in the sagebrush behind me.
Hair tickled my left cheek as the breeze, formed by the rising air, sifted past me.
I waited.
A massive book called me to its depths, its pages luring me to leave my dry western life in trade for a mysterious castle half a world away.  How easily it sucked me in, spinning in a whirlpool of well written plot and characters.
But there was no denying my place in the world.
A lonely canyon rim.  Thunderclouds building in massive silence.  The panting of my shadow dogs as they lay under the pickup.  A tiny trickle of sweat down the small of my back.  The realization that thirst belonged to my world, not the book’s, and I reached for the jug, grateful for the tinkling of ice cubes held inside its insulation.
A disembodied voice broke through my world, coming from the yellow radio clipped to my jeans.
“Yeah, can you start the generator up again?”
“Can do.”
I rose to my feet and flipped a switch and yanked the cord.  The generator turned over and began its attempt to pull water from the base of the canyon up to where I stood.
“Anything?”
“Nope, sorry.”
“Shut her down, then.”
I bent and pushed the kill switch.  Straightened and once again took in my surroundings, the last of the engine roar dissipating in the open expanse.  The heat chased me once again to the shadows of the pickup.  I reached for my book and headed back to the castle. 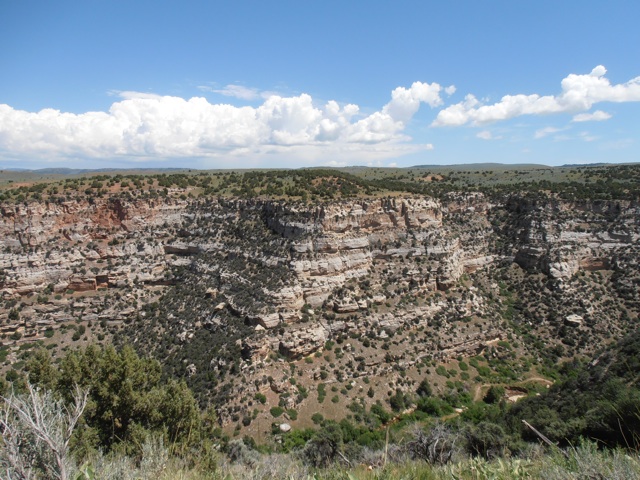