The other day, when Brandon finished his metal Centennial sign, we decided to take some photos.  Vernon’s sister and her husband were here from California… and it seemed the perfect time to snap some family photos.

The difficulty lay in the long legs of the sign…
Where were we going to put it, that we could also run the timer on our cameras?
First we tried leaning it against the scale.
(It’s the yellow boxy thingamajig)
It was STILL too tall so Daniel pulled his pickup onto the scale, some of us climbed aboard… and our cameras were too low.  The sun was glaring off of the sign and it was unreadable!  OK.  Vernon drove his pickup down in the swale, and our cameras were put on top of the generator that just happened to take up most of the bed!  (Yes, we are missing Matt, Victoria’s husband…)
You really can’t tell, but Brandon would push the timer on my camera, then Victoria’s… and sprint to get into position with M.!  That was good entertainment! 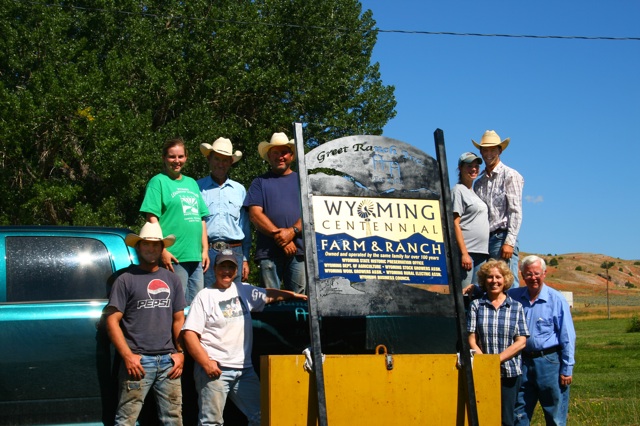 The sun’s too bright, the hats are casting shade, and you can’t see the sign well enough!
OK.  The hay loft in the barn is tall, let’s move over there!  It worked for the guys (That’s Daniel, Johnny, Brandon, and Vernon), but the rest of us were unenthusiastic about packing into the hayloft… and who would take the picture? 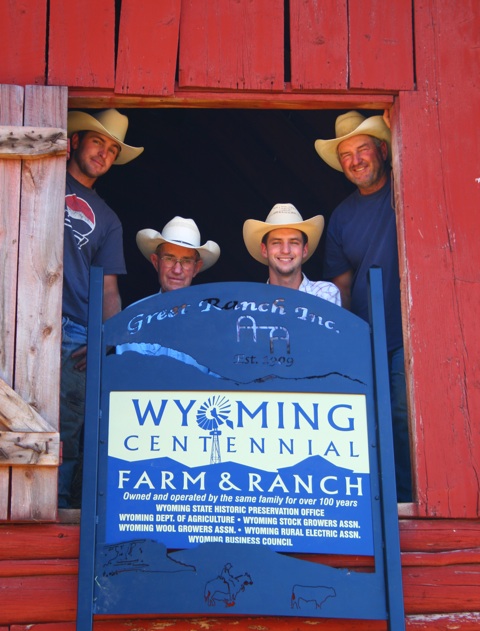 We tried a tad bit more creativity… and nothing more creative than your old Ford 5600.  This time it was me pushing the timers… and trying not to step on a dog while I climbed onto the tire!  So that’s me on the left on the front tire… M. up top by the muffler, T. and C. from California, and Toria on the fender.  Note the multiple English Shepherds in the shade… Sadie, Lucas, Elsa, and Dally are all there!
Note:  Obviously this was unplanned… *some* of us girls are in our grubbies with our ball caps on… our “work clothes”!  We’ll do this again and try to clean up!
Next time we’re all together.
Maybe the sign will be planted then! 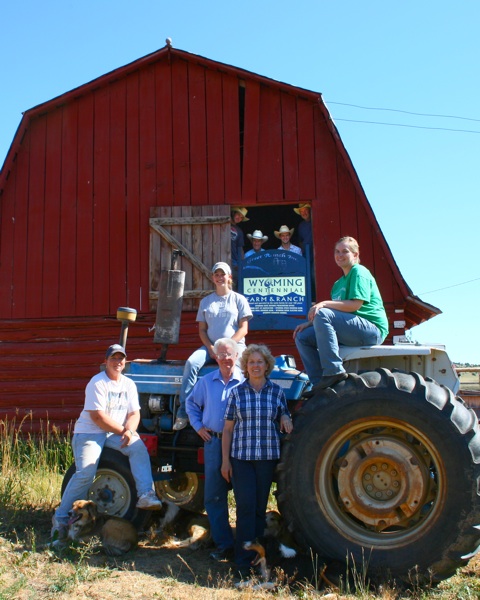 Another thing… M.
M. has been in the background for years now.  She’s dated Brandon a long time.  She’s helped us move cattle, do dishes, and marry off Victoria.  I’ve tried to respect her privacy… but she’s a permanent fixture around here now.  I’ve asked and received permission to introduce her to you.
So, readers, meet Megan, Brandon’s fiancee.
Of course, I’m introducing them officially as a couple the day they are moving back to Laramie so Brandon can get his Master’s Degree.
Good timing, Carol!
But I have a feeling you’ll be seeing more photos of Megan around the end of September…
That’s a post for another day!
My family is *expanding* rapidly… and all I can say is, “SQUEEEEEEEEE!”
****
August 19, 2010   Service
August 19, 2009   Wordless Wednesday – “Tall Grass/Quarterhorse/Fat Cows/Brisk Wind”
August 19, 2008   No entry.
Find me here!