Projects can’t seem to get finished before something else rears its head and demands attention like a grumpy dragon waking from a century long nap.
It’s not just me either.
The guys were merrily combining grain and cutting hay, when the bridge suddenly decided it needed repair.  Since the oats are on the other side of the bridge as was the hay they were cutting… everything stopped so they could access and move the grain/hay/equipment.

Nothing like tearing apart a bridge and hauling new bridge planks in in 90* heat!

(Elsa… maybe you should wait before crossing…)

Then the storms would blow through.
Forty mile per hour gusts bringing dust and lightning would send us to find shelter… and just as quickly they’d disappear… then I’d be sent to the highest point to look for smoke.  Sometimes, I’d give it just a smidge more time before I went up TOO high. 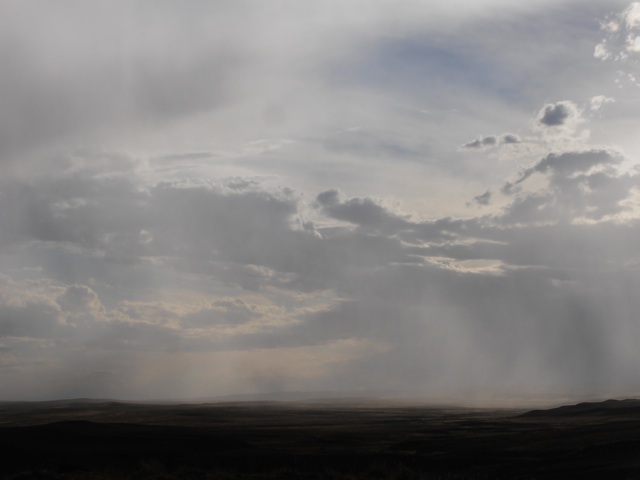 (There *IS* smoke on the horizon… on the left side… but that means it was clear over by Thermopolis!  Too far for us to fight!)
Yesterday, I blew to town for an ambulance call… and while I was there, a volunteer firefighter told me there was a fire out here.  The ambulance call turned out to be a false alarm… so I zipped back home to see what was burning.  A few cedars were burning in the rocks… and we watched from a distance as they died down and out.
Nothing like scooting 40 miles for *almost* no reason!
It’s hard to complete tasks this way.
Soon we’ll be LABORING… we always LABOR on LABOR day.  There’s cowboying to do and company coming and then some SUPER BIG NEWS coming our way and I’m trying to finish up my projects in the meantime!
Plus, I’m starting a *really* fun little project… and I’m hoping some of you might be interested in them.  Just a question:  Does anyone like t-shirts?
Stay tuned…
barring dragons and smoke and fire…
This will be a busy little place!
****
August 27, 2010   Just to Make You Too Happy
August 27, 2009   Cerberus
August 27, 2008   No entry.
Find me here!