Bison antiquus.
Bison occidentalis.
Bos.
Guess what.  Since I went to college, back in the dark ages, they’ve messed with what I remember about the classification of our dear departed buffalo.  (Heaven knows it’s not because I recall things from that long ago INCORRECTLY!)
Suffice it to say, 12,000 years ago, what Folsom man hunted with atlatls was a HUGE version of our buffalo today.
My buffalo doesn’t fall into that category.
It’s more modern.  (That’s my guess!)  He’s 27″ tip to tip… too small for antiquus.  Unless he’s an *immature* antiquus… but I couldn’t be so lucky! 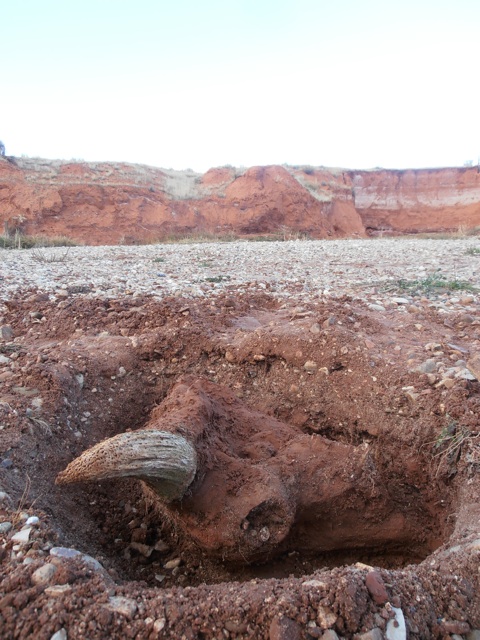 How old?
Well, all I can say is that it was mixed in with a gravel bar that sits under 4 feet of fertile silted soil, built up over perhaps hundreds of years.  The last recorded buffalo in the Big Horn Basin was around 1890… 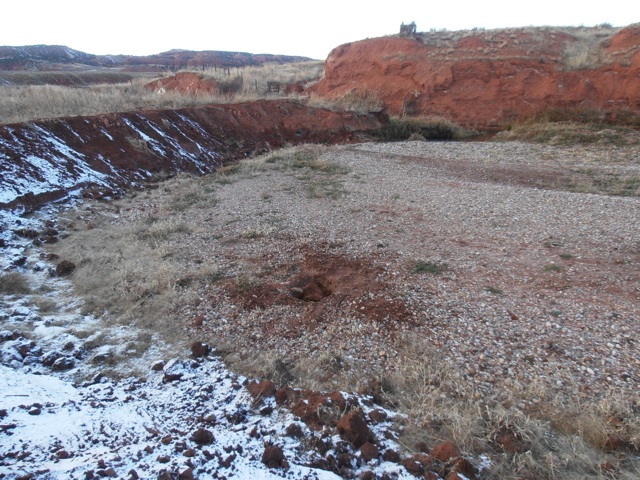 How old is the buffalo itself?
I’m no expert, but I’ve seen mature bull buffalo skulls with large “lumps” on their foreheads… a heaviness built up after years of growth.  My guy doesn’t really have that, though he is heavy and well built.  I’d call him mature, but not old.  Perhaps 6?  His teeth look in fair shape!
Is this where he died?
I’d say yes.  After hunting buffalo skulls for years, if they’re rolled around creeks and washed and flooded out year after year… they’re pretty beat up.
My guy has his teeth, his nose, even his sinus bones… paper thin and translucent.  If he’s moved, it hasn’t been far.  I’ll wash him out more delicately to preserve those as much as possible.
Are you going to bleach him out?
No.  I doubt you could even do that… this red dirt is a great dye and it’s bound to be absorbed throughout the bone. 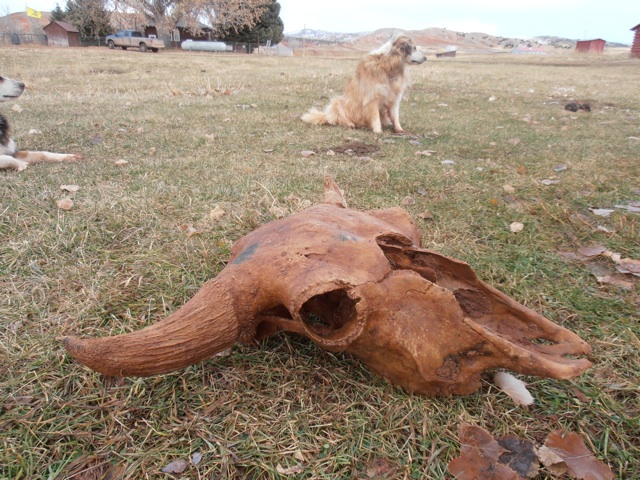 How can you preserve him?
I’ll be spraying him with a 50/50 solution of Elmer’s glue and water.  It dries clear and glues the fragile bone in place.  I *did* learn something at field school…  of course, there’s probably something newer and great and wonderful… but watery Elmer’s works just fine.
Will you hang him on a wall?
Probably not until I manage to clean more dirt out of his brain cavity!  He’s still heavy…  and since it snowed today… warm weather and running water may be a while in coming!
What were those two extra bones?
Ah.  My *duh* moment.  At first glance, I thought rib… but they ended up too short.  The angled groove really threw me for a while.  Daniel guessed part of the lower jaw, but they were so lightweight, I didn’t really think so.  I was stumped.  Then I’m sitting at my computer and glanced to this poster that hangs on my wall… and, ta-da!  There it was right in front of me.  Those two bones are his nose plates.  After cleaning him out more, I may reattach them. 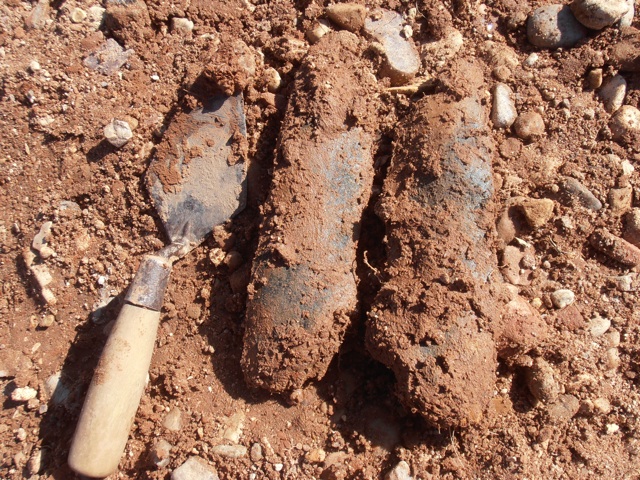 Any evidence about HOW he died?
No.  But I’m going to go back and try a few test pits.  If I’m right… and the rest of him is there somewhere… that’ll give him even more of a story.
Are you going to go look for more skulls?
Definitely!!! I absolutely LOVE doing this… It brings back the memories of my great summer of Archaeology Field School… my always fun and inspirational professor, Dr. Charles Reher… and the friends I made there…  ( I’m forwarding this to Dr. Reher.  I’m sure he’ll be happy to line me out, since his love is the Vore Buffalo Jump!  That guy knows bison!)
What this, “Since Way Last May, Amen”?
Sorry, it’s a line from a stupid Girl Scout song about a dead buffalo.  Honest.  It’s been stuck in my head! 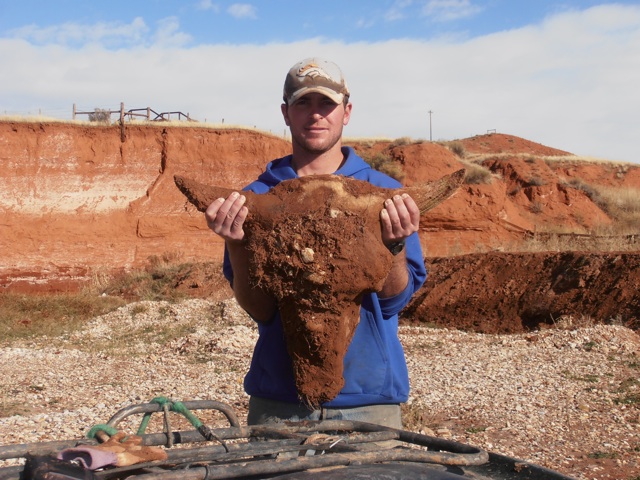