I keep waiting for it to “HIT”.

The rush of baby calves.
The flow of amniotic fluid… the grunts of labor… the slimywetcuterthansnot black babies that (hopefully) slip into this world… the steam that rises from their backs… the first shake of a head and blow of a nose… the mother’s soft “meh” accompanied by a rough tongue’s caress… the staggering dt’s as the calf tries to stand… the instinct to stand then nurse… the laughter as the calf tries the “wrong end”… the tongue’s fumbling attempts at capturing the flimsy tit on a moving mother that’s trying to see where her baby is going (my, how simple it would be with hands and opposable thumbs!)…
Somehow…
Somehow…
It all comes together and it works.
We have four, or is it five?, calves on the ground.  That’s hardly an onslaught.
What will tomorrow bring?
****
A photo using a flash from the other night… Snowflakes highlighted, heifers unfocused.  I actually like it! 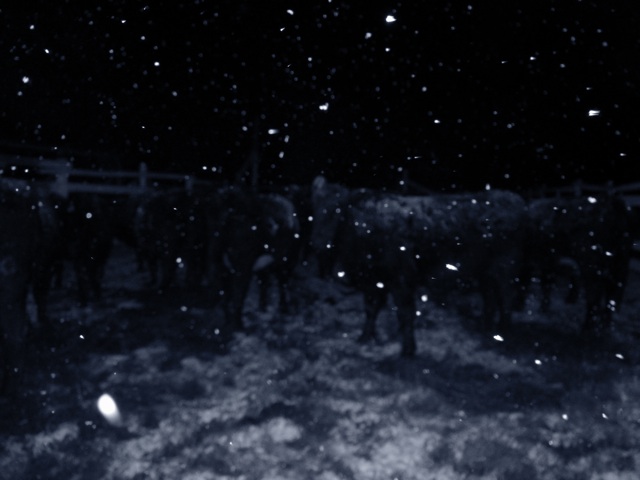