Well, I’m cruising along this evening, thinking I was forgetting something… la-ti-da…

Then I set down here and it hit me!

TOTALLY forgot about it until just now… so let’s see how many I can answer before I fall asleep!

Sara:  Is there ever going to be any Lucas puppies again??

Oh, I certainly hope so!  He’s the reason I believe in English Shepherds, so I’m hoping for more pups from him!  Nothing firm yet, nothing on the calendar… but I’d love a nice pup from him and some sweet darling girl!

Bert:  Gave me some great advice on the techniques and supplies needed to put a fire barrier behind my wood stove!  Thanks so much, Bert, I just love learning these things!

Liza:  When the calves are weaned, how do you separate the cows? Will they accept being herded away from their calves?

We gather the pasture and put everything in a large corral.  From there, we move into smaller pens and just swing gates to let calves go one way, cows another.  There is no actually herding because they would just all split around your horse and run back to their calves.  The cows are left outside the corral and the calves are loaded up and hauled down the mountain.  (at least this year… we’ve done it various ways in the past!)

I actually DID wash all the dirt out of my buffalo skull FINALLY.  It still sits on the floor… I’m trying to decide if I want it on my wall in the house or out in my studio…

Marilyn:  Just a comment today to say that I LOVE the new header on your blog! And the picture for October on the Rim Rock calendar is super – the single corn stalk with sunset in the background must have been a tricky shot?

Marilyn, it wasn’t tricky at all… plants don’t move unlike my other subjects!   The trickiest part was trying to show the windrows of sorghum laying in the field.  Vernon had just missed that one stalk, but you have to really look to see the lines of the cut sorghum laying there!  And thanks for the compliment on the header!  Thanks also to Holly, Taryn and Donna for liking it as well!

CJ:  Who named Panama? How was the name related to a sorrel horse in WY? What happened to his right ear?

At the time, Brandon and I were discussing names.  Brandon likes to name animals after places and he suggested Panama.  I liked it and then said, “Wasn’t there something called Panama Red?”  (red being another technical term for sorrel)  Brandon googles Panama Red and finds two things… the song (which was what I was thinking of…) and the variety of marijuana (which I DIDN’T EVEN KNOW ABOUT).  Now Brandon tells everyone I named him Panama Red after my favorite ‘flavor’.  Kids.  No respect.  I don’t know what happened to his ear… could have been banged in the horse trailer, cut on wire, ripped on a stick, or a fairy could have thrown her wand through it.  Horses are notorious for cuts and owies.

Alice:  Will you need to do anything special (like get a heater) for your chickens for the winter? Are they laying eggs for you yet?

Alice, they’ve been laying eggs for me for quite a while.  I’m just getting things figured out for winter.  They’ll have to quit moving every day because of mud and snow.  They’ll sit on my garden spot.  An extension cord will run out to a lamp and a heated dog dish for water.  They need more light anyway, and I’m going to see how much heat the bulb will give off.  It’s all trial and error for me!

Marilyn:  Please tell me a little about this picture – are those old trees poking thru the water on a ledge?

Marilyn, that’s just our irrigation dam taken from a different angle.  You may remember how we put upright sticks across the dam log to hold back water for irrigation.  I’ve posted about it a few times.  It looks very pretty from this angle, yes?

Kris:  I am just curious, because I have never seen the after affects of a fire — did you photoshop it to get the green to pop a bit more? Or is there that much of a contrast due to the ever-amazing Mother Nature?

I honestly didn’t do anything to that picture.  I can’t remember the setting, some I had compensated for low light because the shadows were falling in the canyon… but I didn’t boost the color.  That’s Mother Nature and, most likely, the Auto setting on my camera!

I’m supposed to share my Salsa Recipe here, but I’ll beg off on that until tomorrow…

Thanks for the great questions, folks!

Darrell, thank you especially for your kind words!  Glad you like reading this blog! 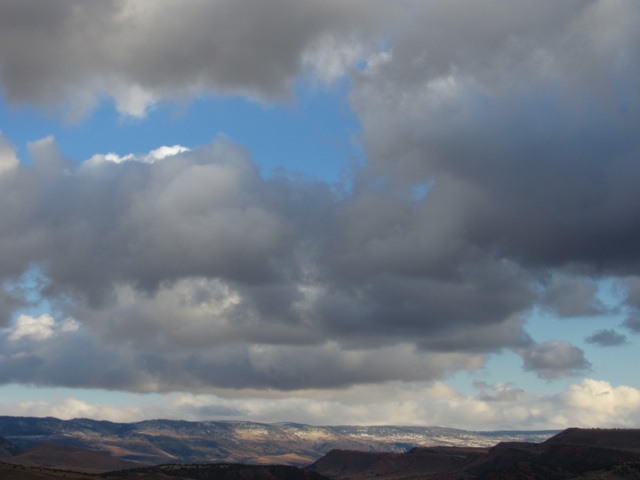