Getting organized for Thanksgiving, including cleaning and straightening up my house, occupied most of my day.

Unknown to me, the guys moved the heifers from one field to another.  Had I known, I would have helped… and of course, taken photos for you!

As it was, the most excitement I saw was my washing machine!  Though, seriously, I *did* get a bit excited!  I’ve purchased some second hand wool clothing… hoping to felt them for my next craft…  I had great success with a couple of sweaters… shrinking them from adult size to definitely children’s size!

I also had a couple of wool blazers… and I really thought they were good wool, though a percentage wasn’t given on the tag.  I *thought* they’d shrink… but shrinkage was minimal.  Maybe I’ll cut them apart, and then wash and dry them again.  Has anyone else done this?

I’ll reveal what I’m doing in a few days.  I just finished one project I’ve been working on for a year, hurray!  Pics of that tomorrow as it needs washed and fluffed before pictures!

I will also be having a “guest blogger” covering tomorrow’s activities.  Again, I have that pesky library job, so will miss the work, but Brandon will be doing a video for his website…  I hope to link to it tomorrow!  Just a hint?  Well, it has to do with BULLS!

Here’s the other highlight of my day… my helper watching the chickens devour their treat! 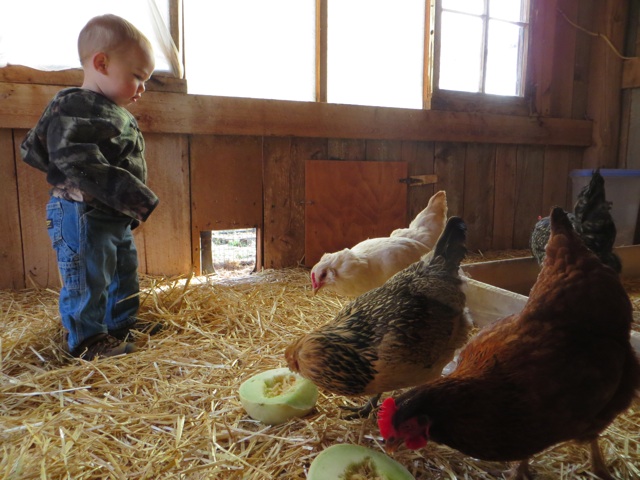