Well, I probably should have baked all day… but instead I just continued my line of crafting like Christmas is still two weeks away!

NOTICE TO MY FAMILY:  Expect gifts throughout January, because obviously you’re not getting all this *hand-did* stuff day after tomorrow!

I made large crayons.  Well, I re-melted crayons.  This was something I did with my Girl Scouts way back when… part service project, part craft… we collected broken, ugly, used crayons from pre-school and kindergarten classes.

We peeled and sorted, re-melted in a double boiler, and used mint/candy forms as molds.  We then repackaged them, and gave them back to the donating classes!  I remember it being fun then, and other than missing those extra hands at peeling paper and sorting the crayons, it was fun today too! 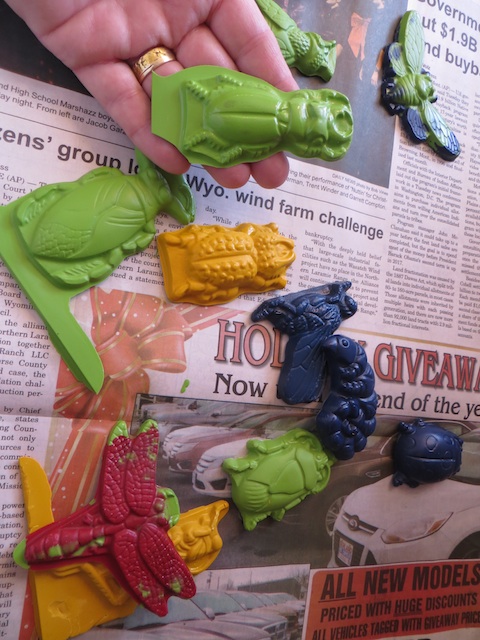 Since I had my wax boxes out, I also made fire starters for stocking stuffers.  It is simply wax pored over dryer lint in paper egg cartons.

Dryer lint is very flammable, add it to cardboard and wax, and you have a tiny fire that’ll burn for 15-20 minutes, to help get your fire started.  I try to get the guys to take them along snowmobiling, or leave some in the car for emergencies.  Having some in your tacklebox or hunting pack is always a good idea.

While I was at it, I did a few Buddy Burners and then a Vagabond Stove.  Being able to start a fire is a great morale booster, but being able to cook or boil water over that fire is a life saver!

Did I take photos?

Do I want to upload a ton of step by steps tonight?  Not really!

Maybe I can make a small slideshow instead.  I’m sure I won’t be doing too much tomorrow!  <choke, cough>

Keep those fingers crossed… and we’ll shoot for then!