Angela… you made the comment the other day about preferring my “large projects” over crafting.  If you hang around long enough, you know I’ll switch modes… and having to empty my garage of a huge bag of insulation and 7 sheets of OSB, to help make room for my car… plus your comment… got me going back to my studio.

Might as well see what I can accomplish, just for a change of scenery. 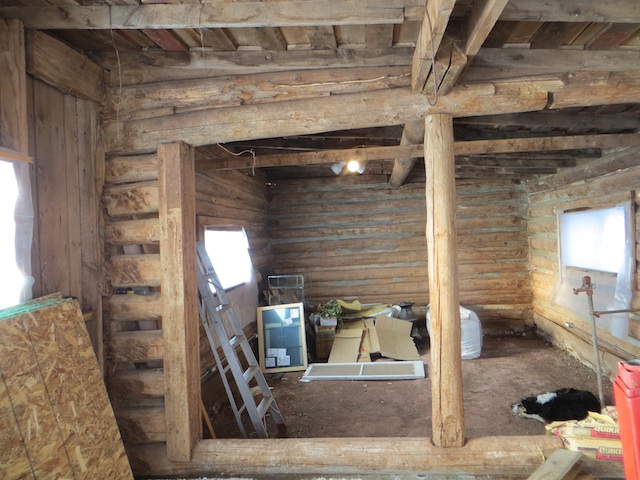 Next, let’s see about fitting the insulation up in the ceiling.  Perfect fit, but no way can I do it by myself.  I figure two 2×4’s with a round flat OSB end on them would hold the insulation in place while I staple it.  I’ll have to go scrounge some 2×4’s tomorrow.

Since I couldn’t slam up some insulation, I figured I’d just set a sheet on the borrowed drywall jack and see how well it worked.

That’s when things turned from “OK, I can do this” to “youhavegottobekiddingme!”.

Plus a few other colorful metaphors.

Do you know what a drywall jack is?  You (supposedly) set your 4’x8′ sheet on the little brackets, tip it horizontal, then crank it upwards until it sits right against the ceiling and you can screw it into place. 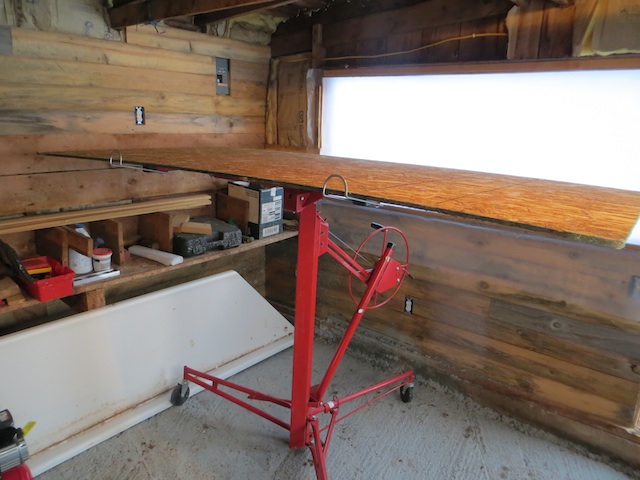 Obviously, this sucker was designed by a man.  (aka, someone who has much more upper body strength than I do…)

First of all the little brackets that you set your sheet on are already 3.5′ off the floor.  That means, by yourself, you have to lift the board up and set them on the brackets.

The same little brackets which are free to pull back out of the way when you are setting the board against the ceiling.  In other words, they are not solid when you’re bent, grunting at lifting the board up, and just put one end of the board on one bracket.  It swings like a well greased merry go round.

Reposition and try again.  This time slowly lean the board against the upper part, with the theory that once held upright at the proper angle, you could just shove it upward and then set the bottom on the brackets.

Which worked until it hit the plastic covers on the end and hung up.

About six inches short of the brackets.

Honestly, it took me SIX, and I kid you not, SIX attempts before I had that OSB on those blanketyblank brackets.

I tipped it over horizontally and took a crank or two.  I could easily see that, unfortunately, the 8′ length will be too long.  Which will entail removing the OSB, cutting it, and putting it back on the jack.

It’ll take 6 sheets to do this one side of the studio.

Those little crafts?  I’m considering them necessary to help me recover from Studio Work!

****
P.S.  I did photograph something really cool today… but Really Cool and Colorful Metaphors are two different stories!