What story should I tell?

Eight months after my marriage, my father passed away in his sleep… His five year battle with cancer finally over.  It was still a shock.  He’d been doing well, a bit confused the last few days, and if we’d been more aware… we might have realized the confusion was a product of the buildup of toxins in his blood.  His last dialysis may not have done a good enough job, or maybe… well, who knows?

Being the baby of the family, and, possibly, horribly spoiled… I did have the distinction of being “Daddy’s girl”.  I couldn’t help it.  He did the coolest things!

He reloaded his own ammunition, fine tuning his load in each gun down to the grain.  We’d shoot and shoot and shoot and come back and sit at the reloading table and clean the brass and set it all up to reload the shells and go do it all over again.  When I moved away from home, he gave me a hand reloading kit… with the little plastic scoop whittled down to achieve the correct amount of powder grains that he’d figured was the best for my little .243.

He gardened… and while I complained about helping haul in sand or squirrel “droppings” ( the pine cone discards which lay under evergreens ), or weeding or planting or anything that might have taken me away from a good book… It is his voice I hear when I plant or hoe or rake.  “Hold the rake level.  Put one hand here and the other there.  Now, short strokes.  Lightly.  Try again.  Now you’re getting it.”

He taught me how to check the oil and change a tire and pump my own gas.  He showed me how to cast and how to gut my own fish.  He taught me to shoot and gut my big game and cut it up and freeze it.  I learned where this bird built her nest or how Caspar Collins died in a cavalry battle outside Casper, Wyoming and due to clerical error, Fort Caspar became Casper.

His interests were many.  He built a knife.  He painted one oil painting.  He finished our un-finished basement and in the process taught me how to tile and swing a hammer and measure and calculate.  He showed me articles in Time magazine and talked about them, he loved Jacques Cousteau’s specials on tv.  He taught me how to use power tools, but preferred I not use them.  “Mark your boards, and I’ll cut them out for you.  I want you to get married with all your fingers attached!”

Most of all, he loved my mother.  When he got sick and spent time in the hospital, he was concerned about HER.  He told me once that his first thought, when he was given bad news, was for my mother, not himself, and not us three kids.  Just her.  While it was a slight shock to know I was down the list, my first reaction was to tell him, that that was the way it should be.  That they were together first… before we three entered their lives.  That amazes me to this day… what a love they shared.

I learned poems and stories and bits of natural history and geology and business and investing.  I learned how to drive on gravel roads and tell a rooster pheasant from a hen when looking at their tracks in the dust.  I learned self confidence and self sufficiency.  I learned handwriting can be an art.  That laughter heals even broken hearts.

That being “Daddy’s girl” was one of the best things that has ever happened to me!

(Look at ornery little me, sneaking into Daddy’s photo without him knowing I was back there…) 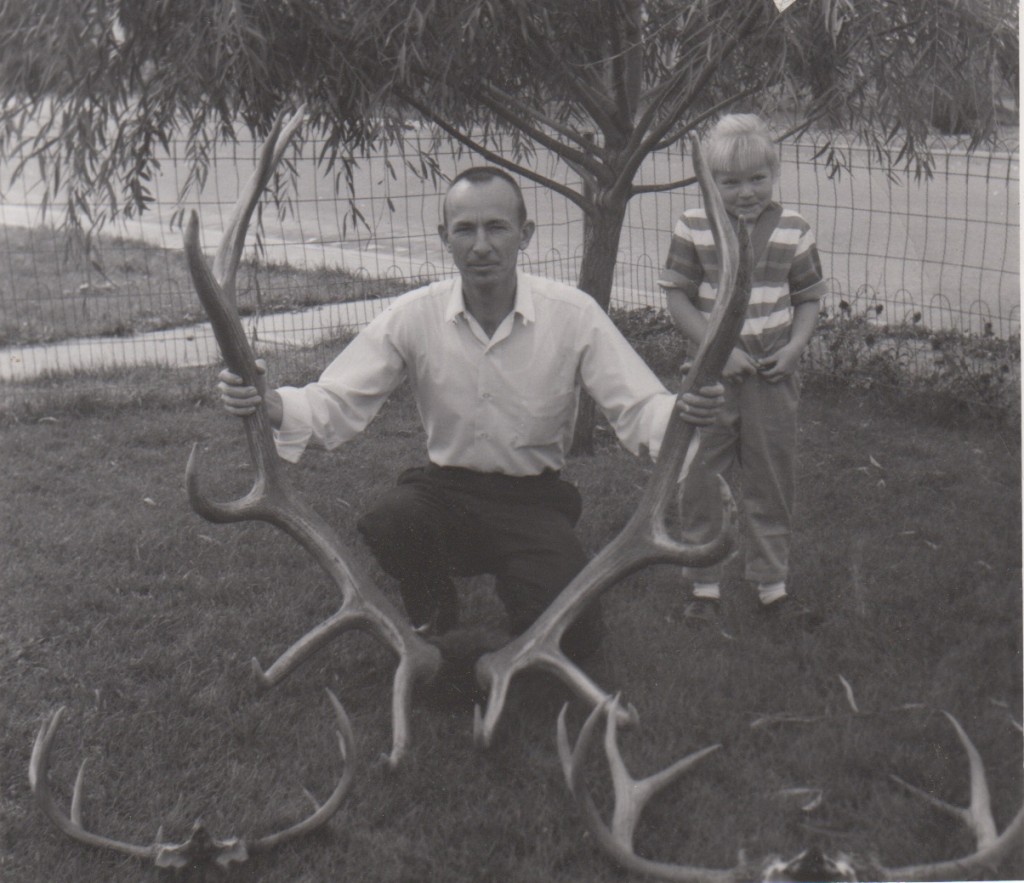