We rode out 2 miles in the cool of the morning, and Dally drank from a few puddles.  The cows came well, and back at home, we crossed the creek.  Another bit and we crossed the creek again.  Up the hill and down the highway… slowly, letting the herd graze and eat their fill.  We passed little Crooked Creek and Dally cooled off. 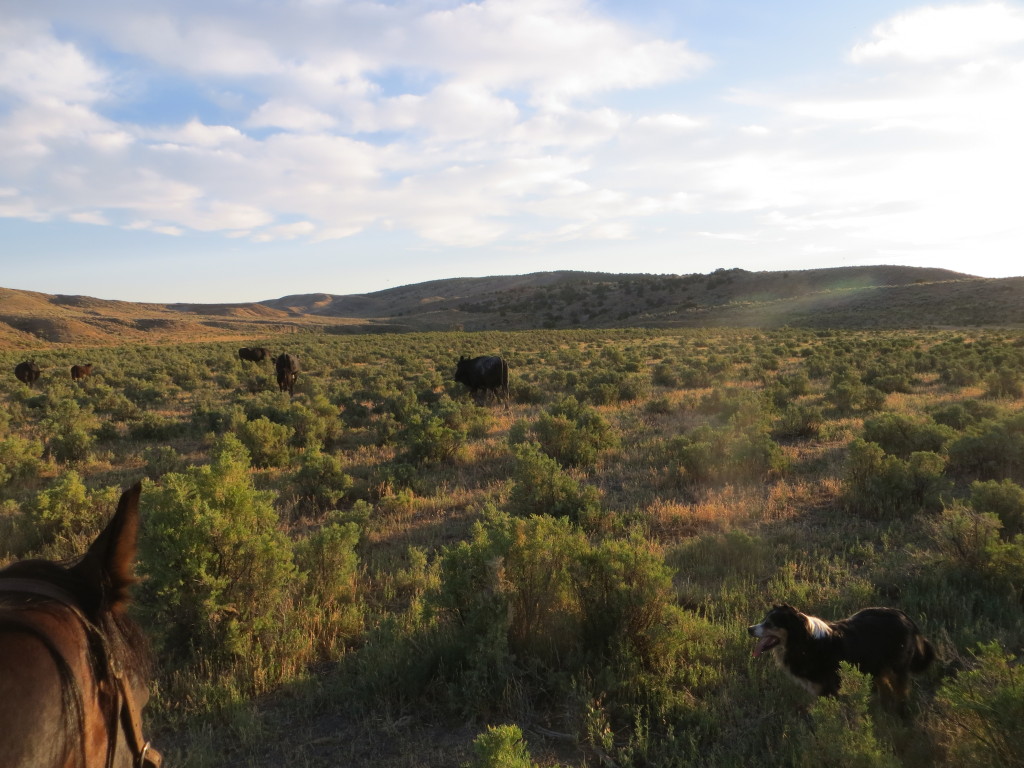 We held the cattle up.  We only had a couple more miles to go, and no deadline to the barren corral.  Eat up, girls!  I took water out of the Durango, plus my heavy blanket to lay on (keeping the stickers from bothering me as I intended to ‘day herd’ for a few hours).  That didn’t last long as I decided Dally and I needed shade more than sticker proofness!

Tossing the blanket over a couple of sagebushes, Dally stole 80% of the shade… but she wears a heavier coat than I do!  I have, in fact, shaved her partially, just to help with this intense heat!  You notice part of the blanket in yesterday’s photo.  We sat there for a couple of hours, until the cows wanted to go somewhere and we were well toasted.

The last bit Dally worked fine… but not too much as the cows moved right along considering it was 84˚.  We decided to drop them in the stackyard pasture where they could eat a bit more and drink… We’d transfer them to the corral in the evening cool.  Shoving them through the gate, I hurried and caught up to the lead and turned them towards the water tank, as the cows hadn’t been in this pasture before.

I lost sight of Dally at the gate, but figured she either headed to the creek, or across the highway to a neighbor’s pond for another drink.  Vernon went to look for her and I headed home.  He didn’t find her, but she doesn’t always come to him anyway, so I gave her a bit to show up at home.  Sure, enough, 45 minutes later, there she is, under the pickup.  Good dog!  She’d done very well… redeeming herself once again from the day I’d complained about her!

Probably an hour later, I called her in to feed her.

She tried to stand, but couldn’t.  Holy crap!  Dally!  She wiggled her way towards me, crawling as she tried to mind me and “come”.  I about flipped.  It was Lucas and Exertional Rhabdomyolysis all over again!  I zipped into the house and mixed up my GlycoGen and took it to her.  She drank it down well, but stayed put.  I’ve kept GlycoGen and K9Restart (affiliate link) for years, packing them in my saddlebag along with a collapsible dog bowl.

I had NO IDEA she was suffering until she crawled to me.  We had barely gone more than a couple of miles without coming across water.  We had started at 5 am, and much of the work was done in cool temperature.  The pace was slow or nonexistent once the heat of the day had hit.  She had laid in the shade (though it was still hot) for two hours with water available.  I thought I had provided fairly well for her considering the conditions.

I doctored her… checked her for swelling or injury… and got her in the cool shade next to my house.

Yesterday she was no better.

Today… She wasn’t better until I loaded Lucas up to go help with today’s work, and she came out of the yard wobbling, and leaped into my mini truck to go along!  A little incentive got her to move!

This wasn’t right.  Even Lucas was better just hours after his traumatic call with E.R.  Vernon was making a quick trip to town, so I called my vet.  “Heat stress” was his greeting to me… not even hello!

“That was a day and a half ago!  She’s still suffering.”

She managed to walk into his office… and the Good Doctor supported what I was beginning to wonder… Could she, at the tail end of our drive, been tired/sleepy/too hot/too slow and just had an old cow bowl her over?  There’s no visible injury, no swelling, no temperature, she’s not pale, no horribly sore spots…  but she’s definitely tender!

So, the good news is that, if she was having heat stress, it wasn’t a bad case like Lucas.  If a cow knocked her down, she’ll be all right in a few days… and it’s time I stocked up on some more K9Restart (affiliate link) for my saddlebags!  (and maybe you should too!)  It’s HOT out there!

8 thoughts on “It’s HOT Out There”