My first bee sting.  She didn’t get me very good, so it wasn’t much… and, yes, I deserved it.

Don’t Put Your Fingers Where You Can’t See, one of the cardinal rules of beekeeping… oops.

Let me tell you the story of this Bee Attempt.

I saw on craigslist a successful top bar hive was for sale.  I jumped at the chance.  Successful.  Top bar hive.  Just what I want.  It was in Riverton, Wyoming, which is quite the drive, and I’m still not sure if the combs survived the trip or not.  The bees were very active when we picked them up, having warmed up to 41˚!, and they had found a tiny way out of the hive, the main holes being plugged up by the seller, and so I know I lost some bees that were left behind.

Now top bar hives are more delicate than the boxed kind, so I’m not sure if this was a good idea or not!

Anyway, on the drive home, we hit blizzard conditions from Worland to here, but I had them wrapped in blankets to avoid the wind chill… so I was hoping they’d make it.  We arrived well after sundown, and we just left them in the pickup in the dark, better than scrabbling around and tripping with them.  The next morning we set them in the wood shed.  This won’t be their permanent home, but after freezing those bees last April in a blizzard, I am hoping this was a good choice until spring really arrives.

I didn’t open the holes quite yet, my thinking was to let them settle down.  Did I want to get my suit on and dig around???  Oh, yes!  But I delayed…

Then today, I worked.  Another 40+ degree day and I was inside!  bleh.  I zipped home and drove straight to the Outyard.  A nice hum could be heard, and though it was after 4:30, I decided to open up the holes just a bit and see if they acted like they wanted to run away, or come out and orient themselves. 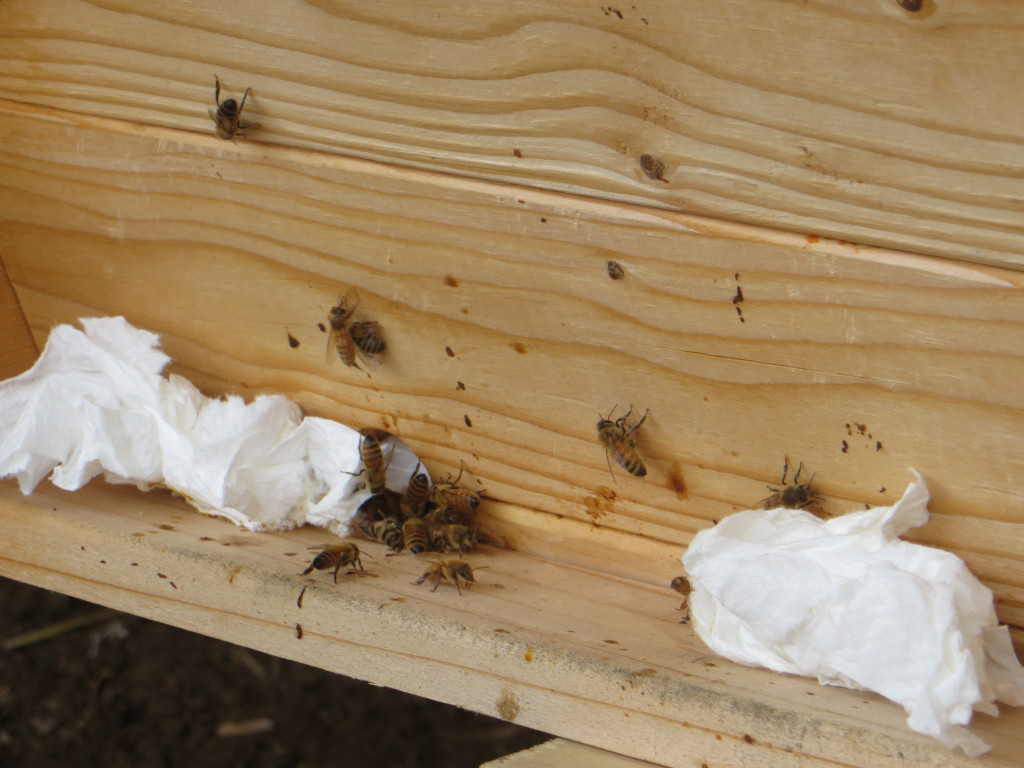 Bees appeared, not very many, and they were busy dragging dead bees from the hive.  They sure didn’t act like they were going to abandon ship… er… hive, and so I opened the holes completely.

Was it because it was late, cloudy, in the 30˚’s, or because they were dead, dying… images of comb shaken loose from the top bars clouded my imagination!  I just wanted to peek… I heard the hum, I’m sure there’s more in there, so what was the deal??  I reached barehanded over to lift a top bar, and sure enough.

That was it.  Once you’re stung, there’s pheromones in the air, with increased chances of getting stung again.  I had no protection.  No gloves.  I had no alcohol to splash on it to cover the smell of the pheromones.

Tomorrow’s work again, with nice weather predicted.  They’ll be on their own until I can zip home from the library.  Saturday is the day.  I’ll open the hive, I’ll see if comb has fallen, I’ll see if they need help cleaning in case a lot of bees died on the trip.  I know there’s supposed to be cross combing (which actually may have been more sturdy on the drive).  Any wax that’s fallen or needs removed, I plan to put into my other top bar hive to get it ready for bees.

Are you ready to get bees?  Now’s the time to prepare!  If you’re interested, click on the affiliate link in the side bar for Back Yard Hive dot com.

Just realized this didn’t get posted last night.  See what happens when you post when you’re tired!