Let’s move on to some much better news…

If you’ve been around here for any length of time, you know Lucas.

I’ve been meaning to share a video of him when he got to work cows a couple of weeks ago, but you know, other things have taken up my thoughts lately!  And before that he had a trip to the vet… and, well, Life.

Now’s the time for some great news!

The tragedy and drama surrounding his paw has gone on since he was a pup and was run over.  Ever since he was 7 months old, he has had a sore paw due to nerve damage and flipping/dragging it in a weird angle.  You can hear it… clump, clump, clump, swish…  I’ve doctored it with everything, home remedies, over the counter items, I’ve waxed it and new-skinned it and wrapped it and bought boots.  Heel gel soles, vet wrap, and duct tape have been my go-to for years.  I’d get it healed up, take him out for a run or short work day, and he’d lose his boot and rub it raw.  I gave him pain pills and antibiotics and and acupuncture and laser treatment at the vet’s.  There really didn’t seem too much else to try.  I just couldn’t bring myself to either amputate it or fuse the joint, and so, he suffered and I felt badly for him.

Then a friend posted a recipe for “Blue Power Ear Treatment for Dogs”, a healing miracle for sore ears, but they use it for many other things.  Well, his paw is about as far from his ear as you could get, but, what the hell. 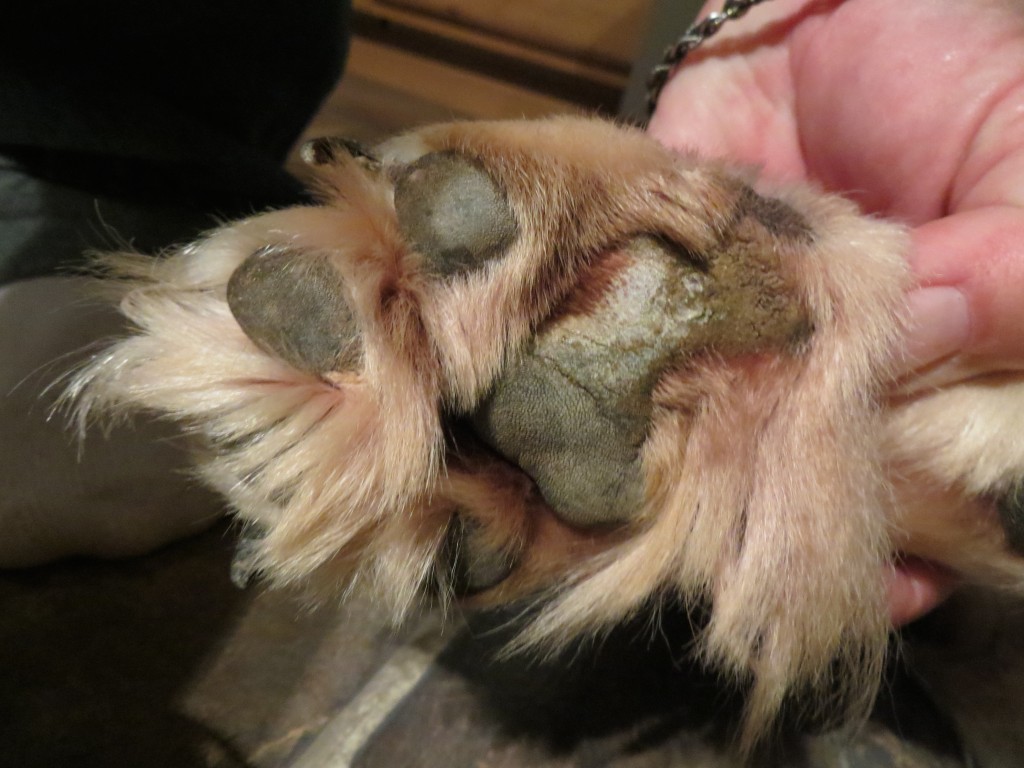 Now if I still has old photos up with my old posts, I could link to the old photos of how raw this could get… an oozing area about the size of an elongated quarter… but, now you’ll have to use your imagination!  It’s healed.

Praise the Lord and K. for sharing the recipe with me!!!

As it healed, the side of his foot began to swell and look like it was filled with pus.

I thought he might have an embedded cheat grass head in it, so off to the vet… AGAIN.  The vet cut in four places, no pus.  He dug around, no seed heads.  He did find some kind of crystallized bead sized clumps, just a few, and he was puzzled.  I felt sorry for Lucas AGAIN, here his paw was healed and then I took him to the vet to get it cut open for no reason.  A round of antibiotics later, and he just has a bare spot where it looked infected. 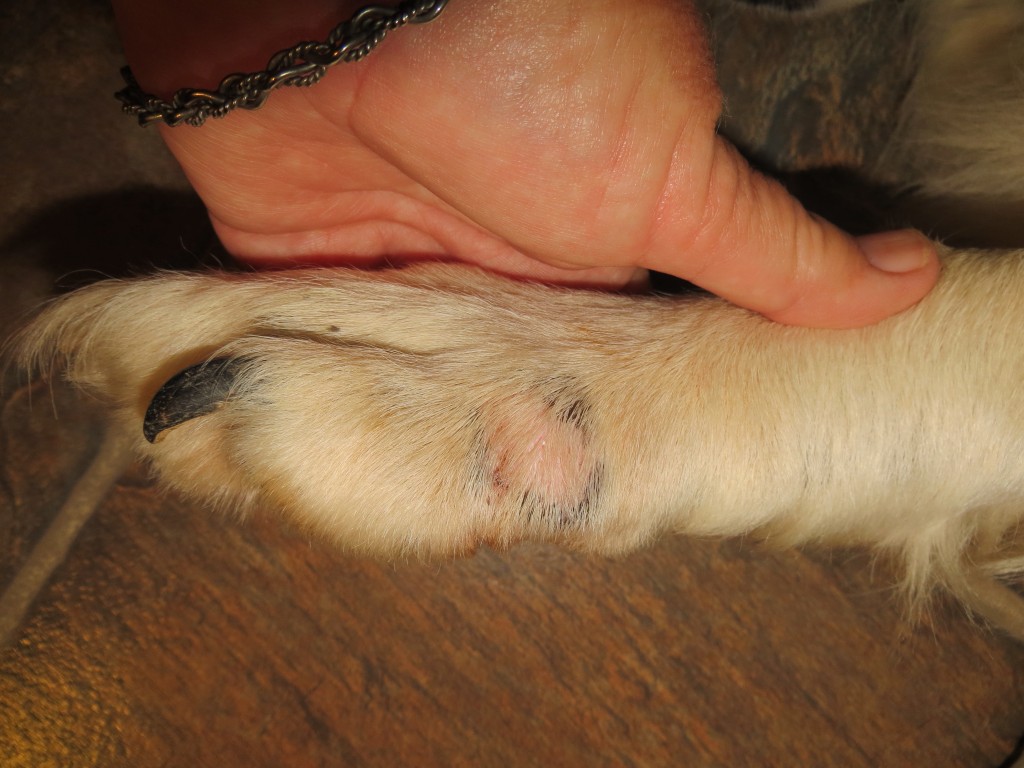 I’m no vet.  I don’t know why, but this stuff has worked.  I haven’t wrapped his paw in weeks and he’s not wearing it off.  Granted, he hasn’t run far or worked long… but…

All this time, I thought it was physical.  Other people agreed with me.  To know that I could have healed this years ago… and saved him all that pain just squeezes my heart!  I’m so sorry, Lucas!  But, finally, his paw has gone from tragedy to success!

Mix and shake well in the alcohol bottle.  Shake well before treatment.  Put in Clairol type plastic bottle to use inside affected ears.  Flood ear with solution, massage, and wipe with a tissue.  Gentian violet stains everything, it’s best to do this outside!  2 times per day for the first week, 1 time for the next week or so.  Then one time per month, depending on your dog.  Works on mites to wax to canker.  External use only, keep away from the eyes.

18 thoughts on “Tragedy to Success”