I cared and I tried, but I did fail.

About a month after the owner returned 5 year old Colt to me, his breeder, I took him to Ten Sleep, held him in my arms, sobbed, and told the vet to give him his final injection.

Go ahead, let me have it.  Tell me I should have done this or that, that I’m an idiot, I don’t know dogs, How could you????? etc.  etc. etc. etc.  I’ll agree with all of you.  I could have done more.  I brought him into the world, I should have done EVERYTHING I could.  Well.  Yeah, but.  How much is too much?  Can every dog be saved?  Should every dog be saved?  At what point is it passing along a problem?  If I had, and Colt bit someone, some KID in the face… could I live with THAT?

I made my decision.  It was not easy… far from it… it was one of the most difficult things I’ve had to do.  I will stand by that decision, and sob when you lambast me for my actions.

Colt’s owner was at a loss of things to do, so she did what good owners do as a last resort.  She returned him to me, his breeder.  She talked of his Jekyll/Hyde personality.  How dog savvy people could feed him treats, being non-aggressive, and he would take them and without warning turn and bite the hand that he so gently had accepted a treat from.  She tried.  Now it was my turn.

Although unsure at first, Colt enjoyed being here.  He loved to run.  He loved wallowing in the mud!  I will never forget his joy in that mud puddle!  I never pushed him.  He entered his kennel willingly, was fed, had miles of exercise, minded his basic manners, came to love me and shadow me like all English Shepherds.  He met everyone on the place, though we kept the small grandkids a distance away from him.  Everyone had petted him.  Their comings and goings were routine.  I had begun to look for him a home.  I did not see the dog his owner had described to me.  I was looking for a home far from town, few visitors, just a job being a companion.

Then the day came.  Daniel had come up for something… working on some equipment… and Colt growled at him.  When he told me I was shocked.  Colt hadn’t growled at anyone before.  He was running loose but staying close to the yard and me… and I asked, “What were you doing?”  “Nothing.  Just got out of my pickup…”  Huh.  We both kind of shook our heads and wondered at the cause.

The next day, Daniel drove up again, coming into the house to see us.  Colt was outside the fence loose.  (I kept Lucas and Dally inside the fence, rotating as necessary.)  I happened to be looking out the window when I glimpsed Daniel tossing down a metal fence post and hurrying through the gate.  “Sheesh.  Your dog was going to EAT ME!”

“Really?”  I was shocked.  I really was.  There was never any indication Colt would act that way… even strangers, the UPS man, no one, ever got a reaction from Colt.

Daniel told me the story.  He got out of his pickup and Colt came at him.  Now Daniel has stood up to 2,000 pound bulls and he’s got the ultimate Dog Voice.  Taken aback at Colt’s actions, he nevertheless told him to GET BACK in his dog voice.  Low.  Throaty.  Demanding.  Colt stopped, turned, and headed towards his kennel.  Daniel said if he was thinking, he would have watched him go all the way, but instead he just turned and walked towards my house.  He heard Colt coming for him.  Up against my fence were some metal fence posts and Daniel grabbed one and fended him off.  Colt respected that!  Even after hearing Daniel’s story, I couldn’t quite believe it.  I mean, maybe he was just barking?  just defending the house?  just doing what my English Shepherds do when someone is coming to my house?  NO.

After visiting with Vernon, the three of us headed outside.  When Vernon opened the gate, Colt shot through it and he was going for Daniel.  Honestly, I have NEVER seen a dog go on the attack like that before.  He was going to EAT HIM.  Vernon and I stepped in between Colt and Daniel but Colt would circle around us, trying to get to Daniel.  It was ugly.  Here was the Jekyll/Hyde dog that his owner had talked about.  Snapping.  Snarling.  Purely vicious.  Daniel escaped through the gate and I stood alone with Colt.  He was calm.  The switch was turned off again.  The “ifs” started pelting my mind… what if we hadn’t been there, what if the fence posts weren’t there, what if it’d been one of my daughters-in-law with baby in arms and toddler alongside, what if it was a neighbor, what if???   That dog would have bit them and bit them badly.  There is no doubt in my mind, then or now.  I knew what I had to do.  I called and set up an appointment for late that afternoon.

I took Colt on a big long run… the thing he seemed to have enjoyed the most while at my house.  I drove and cried and tried to figure it out.  There was nothing that made sense to me.  I had given him the best life I could, and I could not see another step available to me.  Lock him up?  Find a dog behaviorist somewhere and pay gobs of money to figure him out, but it took a month before he “broke” here, how could I afford that?  Try to find that hidden spot where he wouldn’t ever have strangers or family visit??? I’m not sure that place exists!  And really, after seeing that attack, and it was an attack, I couldn’t live with myself if Colt injured someone.  I JUST COULDN’T.

When his run was over, I put the Rhino away and he jumped into the Durango, ready for another adventure.  It was hard to see the attack dog in his soft eyes.  He was tired and content and I drove him to town.

He’s buried out by my studio, down a ways from Elsa, his mother.  There are two spots reserved in between them, the spot where Lucas and Dally will someday rest and watch the sunsets.  I’d just as soon be there as well.  My heart will always carry a small piece of Colt, a reminder of the responsibility I take on as a breeder of English Shepherds.  I love this breed and believe in them.  What went “wrong” with Colt, we’ll never know.  All I can hope is that he is at peace.  That he forgives me.  That he did love being here for the short time that he was.

I long to know if I made the right decision, but I suppose I’ll never know until I meet him in heaven.  For heaven must be a place of fields and mountains and cold creeks, where dogs can run and play and wallow in mud puddles to their heart’s content.  I hope I’m there to feel the warmth and softness of a dog’s loving head under my hands… and I hope Colt is one of them… I hope that the hard stuff is behind us, and joy echoes through the valleys. 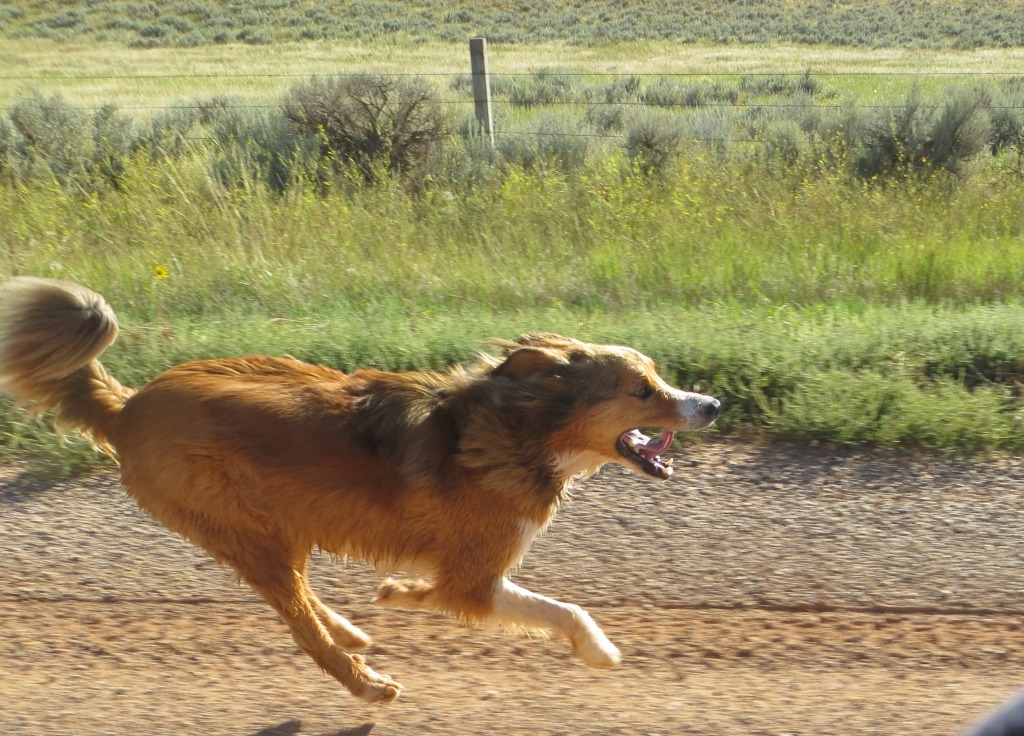