We were home and finished by 6:30 today.  Amazing.  And Vernon cooked a frozen pizza.  Yay!  I fell asleep on the couch for a bit, then woke up to lock up my chickens and feed the dogs.

I fail at animal husbandry.

I started with two broody hens and about 20 eggs.  6 or 7 rolled out of the nest by accident or were cracked and rotten.  But ones continued to disappear.  I mean, just Gone.  No eggshells, no slime… gone.  Like a snake or a dog had just come in and took off with one.  The dogs couldn’t get in, I saw no snakes… I briefly contemplated a cannibal chicken, but wouldn’t it just crack them and eat the bits?  I moved the eggs into the dog kennel, thinking it was another hen or maybe the rooster… By then I was down to about 6.  Holy cow.  No cheeping.  I didn’t think the eggs were viable.  I had the one chick by then, but no others.  I got busy, didn’t check for a few days (I had to almost crawl in to see the nest) and then they were gone.  Two broody hens had raised one chick.

Then, I noticed something Very Apparent.  Duh.  One hen was thin and had feathers gone and just looked like a poor specimen of a chicken… the other was fat and sleek.  How I really didn’t put it together sooner is just STUPID.  I mean I saw it, but I didn’t SEE.  How could one hen be so poor and the other looking like she’s the healthiest she’s ever been?  I think I know.  She was on a diet of farm fresh eggs.  If I think she’s eating my regular eggs… she will go to the Great Coop in the Sky.  As it is, she’ll never be allowed to be a broody hen again.  Here’s the culprit… she’s no longer a Mother Hen either…  Scrawny hen got that job. 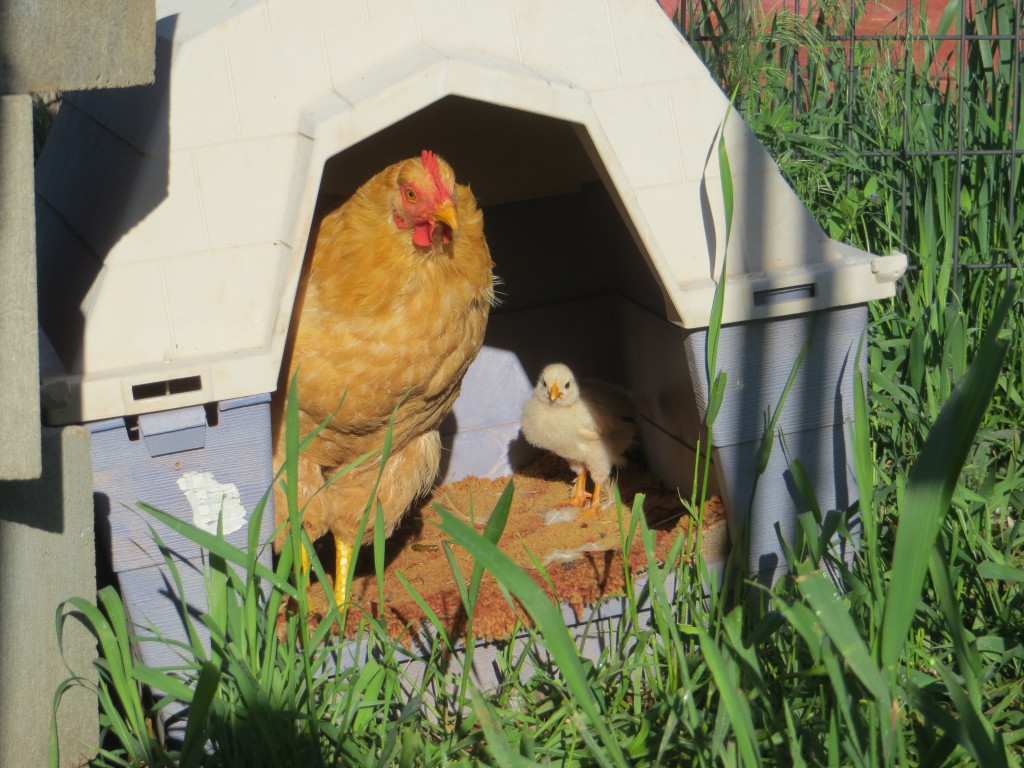 Dally’s due date was last Saturday.  Nothing happened.  I went riding Sunday and, nervously, I asked the girls to check on her while I was gone.  Nothing.  Monday.  Well, ok, maybe within the realm of possibility.  She had gone through two days of panting, she was fat, (not bursting, like other litters, but I thought, maybe she just had a couple in there, not 9 or 10!)  I couldn’t milk her, but there was swelling.  Then Tuesday… she begged to go move cows.  Hopped around and was ready to go work.  Really.  She’s gone twice now… not acting pregnant at all, just like an overweight, out of shape girl.  The clinginess is gone, the Bitch From Hell attitude is back down to just Bitch (she has a reputation – and should you think I’m cussing, it is the proper term!)  The morning she spent licking herself was just a day to get me to herself, I guess.  Looks like there will be NO PUPPIES.  She did Everything she has always done to whelp pups except get fat in her belly and produce pups.

Rats.  I guess she’ll get spayed… and Rimrock English Shepherds will have to wait on Eden to mature.

Good thing I’m not in charge of cattle breeding on this place!