I feel like I didn’t accomplish much today… They weren’t very physical, I guess!

I started to scan some of the old family photos… after figuring out the best way to do it, it went fairly fast.  Scanning at a higher dpi slowed the process down extensively, so I didn’t.  I imagine I may regret that, but 300 dpi it is.  I did find how to make it realize it is scanning four photos at once instead of one large one… that helps!  Renaming them with the title (if any) on the back helps sort them.  Ten pics of branding all start with “brand” and then something else that sticks out in the photo… “brandatbarn” for instance.

That took much longer than I had hoped, and I have many more to do.  Here’s my favorite of the day.  It reads “The Defender: Helen Wilson age 4 1917 She is doing her bit for civilization’s sake.”  I’m not sure who she is related to… but who cares??? What a cutie! 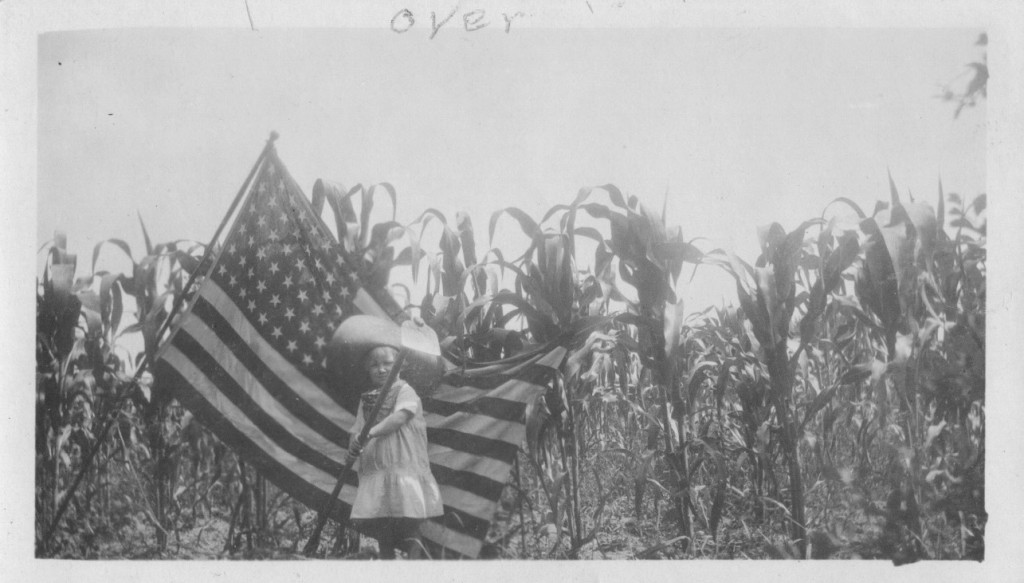 Note the hat and hoe and number of stars and how thin that corn patch seems to be!!!

After lunch, I decided to check my bees.  I had harvested honey a few weeks back, and I hadn’t been back.  I knew I should because I had one hive lose a queen.  Although I had given them a brood comb from another hive, for some reason they didn’t turn one into a queen.  I should have checked them just a week later, but, somehow, I didn’t get it done.  Today was tragic… No queen and now wax moths.  Wax moths will attack a weakened hive and destroy old comb.  It’s the natural circle of the hive, but it definitely means the end of this hive.  I’ll share some of the little honey stores if I need to with the other two hives, possibly freezing them first to kill any wax moth larvae.  It’s my understanding that wax moths exist in all hives, but they develop and destroy the old comb when it has passed its usefulness.  A healthy and vigorous hive needn’t worry about wax moths.

I’m looking at it as simply having a hive ready to go to next spring, because I bet one of my other hives will swarm.  They are rocking and rolling!  I checked on the hive formerly known as Mess-opotamia, now Babeelon.  I lifted the lid carefully and whooooeee!  There were bees everywhere! 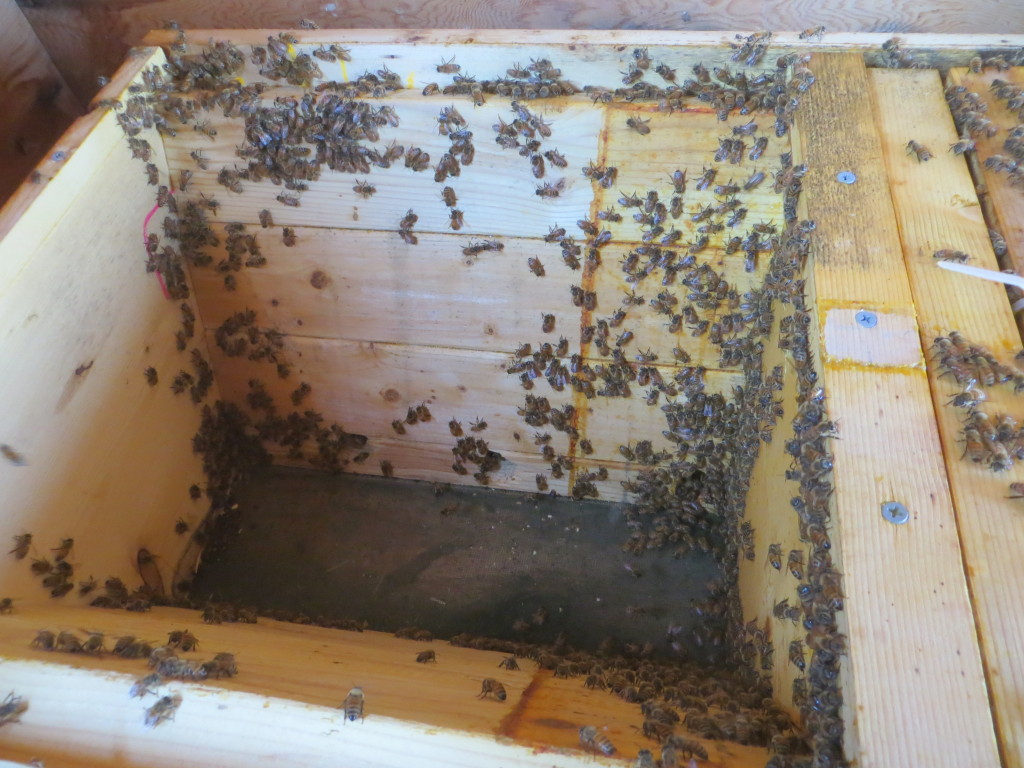 I looked under the lid and it was COVERED.  Today was hot, and this was their version of “bearding” or cooling off!  I helped them out a bit by giving them a couple of empty bars and I removed some zip ties I had holding up some gifted comb.  I don’t expect them to build more fresh comb, but maybe a little more air to circulate will lessen the heat index!

No mice were in evidence, but there was pack rat poop.  Pack rats won’t fit through the entrance holes, but ish!  Gonna have to put out some poison for it.  Pack rats are BAAAAAAD this year, along with mice…  gross.

Since I have two hives the size of Babeelon, this winter I think I’ll build another hive the size of my Golden Mean Hive, then I can alternate the top bars and comb between the two.  I’m not really sure where I’ll put it, maybe just on my table top… I’ll have to think about that!  For those of you future beeks thinking about getting a hive in the spring (K., I’m thinking of you!!!), think about getting TWO, both the same size!!!

I was enjoying myself, but as the sweat began to pour down my back and bead on my cheeks, I decided I’d had enough and closed them back up.  Ice water and air conditioning was next on my list.  COOL!