This tree is an old cottonwood.  It is alive.  There’s a little road that is used occasionally that runs underneath it… it depends on if the gates are open (and cows present) or not!  I remember the UPS man driving his tall van under it once and scraping the roof.  It was getting low even for pickups, so one of its major limbs was trimmed off!

Marilyn – “Do you still check on the cows and calves via the barn camera?”  Well, this kind of feeds in with this from Kay – “When you say “We’ve never had a calving season like this one” what do you mean? A mild winter so the new born calves don’t get frozen ? No problems with delivery, so no calf has to be pulled out by a man, or the vet has to be called ? Just curious.”

Although Daniel worked on getting the barn camera working… he had to order some part or other… we didn’t use it.  Why?  Because with the lack of snow, we never put the heifers in the corral to check on them at night.  There were no piles of snow or frozen mud puddles for the heifers to drop their calves in, just dry ground.  It was easier to leave them out, let them calve on dry ground (they would have mudded up the corral even with the straw we’d give them to lay on), and drive around or walk around them to check them at night.  It never really got cold (like -20˚) or blizzardy, so newborns didn’t get chilled down or have to be dragged into the calving shed pens to warm up.  There’s always a problem or two with deliveries, and, no, we don’t get a 100% calf crop, but we try very hard.  It was just sooo mild, the weather wasn’t a factor in this calving season. KNOCK ON WOOD.

Della – “Getting chicks is very exciting! What kind?”

Well, someday I’m getting chicks!  I read my receipt as saying Monday, March 14, but it said THE WEEK of March 14.  Hopefully tomorrow morning (Wednesday).  I ordered 7 black star (aka black sex links, I’ve two reds right now, but they didn’t have reds available, so I took blacks.  They are egg laying machines… small birds.) Seven buff rocks. ( I have two of these as well.  Bigger birds, so double duty for eggs and meat if we wanted.  They’re the ones that went broody for me last spring. Friendly girls.)  Seven pearl leghorns.  (These are white layers that my mother-in-law used to buy 100 of every spring.  She sold eggs for pocket money to the local store.  They are white and they lay white eggs.  All my others are brown layers.  Why white??? So I can dye some Ukrainian eggs without having to get them from my neighbor!!!)  I finished my order with four New Hampshire Reds.  And, honestly, I don’t remember why I ordered them… just to try something new, I suppose!  The total comes to 25, but I’m counting on some attrition.  25 is too many, so if some don’t die or the dogs and hawks leave them alone… I may have some for sale later!  Remember I started with 25 last time too… and I have only 5 left… I cut myself too short that time.

By the by… Peg, I just love your stories about growing up at a hatchery… I sure hope you’re writing these stories down!  Mom had some feed sack material stashed in her cedar chest… I wish they still did that!

Marilyn – “what is “newspaper tin” that you referred to?”

The Worland newspaper used tin in a way that reminds me of the old mimeograph machines… the ink would stick to the tin in whatever areas needed printed, then it just rolled over the paper printing each page around and around… I’m not describing the process very well, but anyway, the tin sheets could only be used once.  They’re very thin, you can actually rip them by hand if you want.  The ink is smeared as well.  This pile is from the 1970’s, I believe… obviously around Christmas. 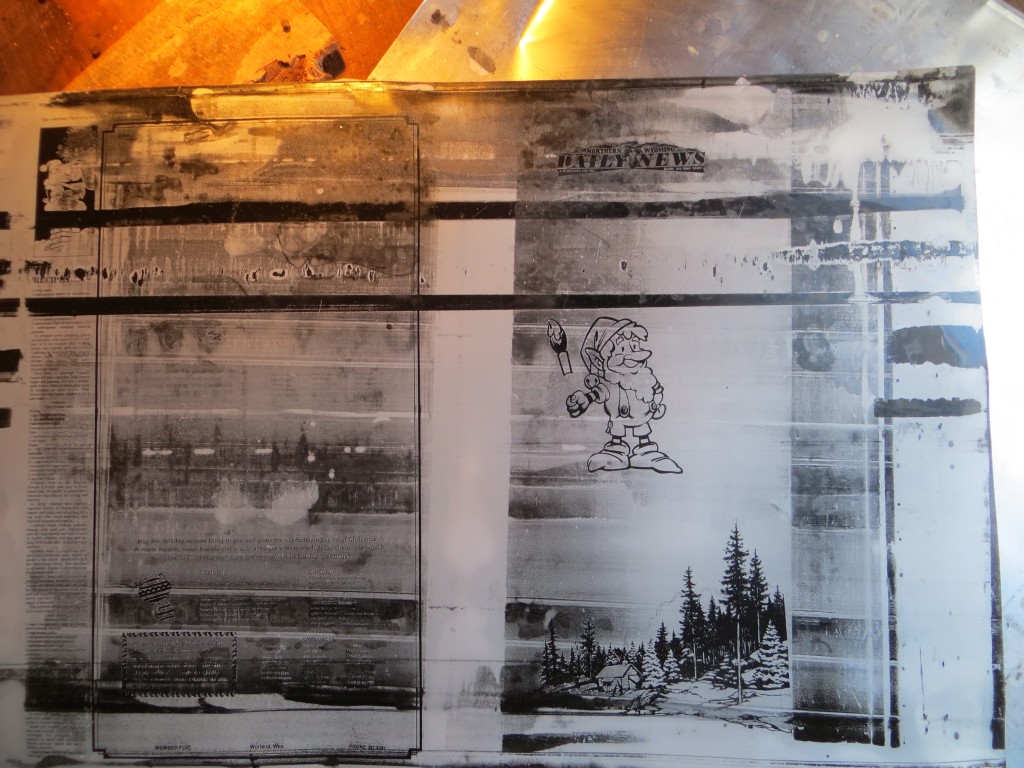 Very interesting as far as businesses that no longer exist, and prices!

More Q&A coming… but that’s it for tonight!