Hooves scraped on lichen-crusted stone.  The crackle of dried Mule’s Ears flowers caused even the dirt to make noise as we walked through. My hand reached out, brushing the tops of sagebrush, fanning the scaly needles of juniper, returning to rest on the work-etched leather of my chaps.

I held the reins loosely, giving Panama his head to pick his way through alternating patches of rock and soil, finding the trail through the tall sage and around trees.

He definitely needed realigned… Panama tended to go to the right, inching ever closer to Brandon and Peanut last seen a quarter mile uphill and to the right of us.  An occasional tug straightened out this defect, his steering balanced for a few more yards.

A whiff of musk.  Quickly, I took into account the direction from which the slight breeze drifted.  I stood in my stirrups and looked around over my right shoulder.  I saw nothing due to the high bushes, but the musk was unmistakable.  A few more steps.  Once more, I turned.  There he stood, nose to sky, watching Panama and I and we wandered through the living obstacles.  A smallish three point buck, he either was the only buck or the youngest (and stupidest) one of a hidden bunch.  He watched.  We continued on.

Over a slight rise, the brilliant orange stood out.  The shape squared itself away, becoming an insulated vest and hat belonging to a hunter.  He stood next to a juniper, peering continually into his hand.  It took a minute for me to figure out his strange posture… he was reading his GPS, rapidly trying to locate himself and see if he was trespassing or on BLM land.  Brandon and Peanut appeared from above, and we triangulated onto the hunter, our black cows solidly walking in front of us.

We pulled up.  “Sorry for ruining your hunt.”

His relief was evident, we weren’t going to yell or kick him off private land.  A few more minutes of platitudes and Brandon and I nudged our horses back into our staggered walk through the rocks.

“Oh, he was probably across it.  Pretty close anyway.”  Brandon shrugged.

He continued up the draw following our charges, and I urged Panama to trot through rocky ground in order to turn a few errant ol’ hides to go the right way with everyone else.  Half a mile later, I met up with Daniel.  My smile still evident on my face.

“Oh, that hunter.  I didn’t tell him there was a little buck 150 yards from where he stood!  It was just a little buck… I’ll let him grow up a bit.”  I thought of the buck, tucked in nice and cozy in the tall sagebrush, hoping to make it through one more hunting season.

A grin once again split my face, and Daniel and I pushed our little herd up on top, through tall feed, to head them off the mountain towards home. 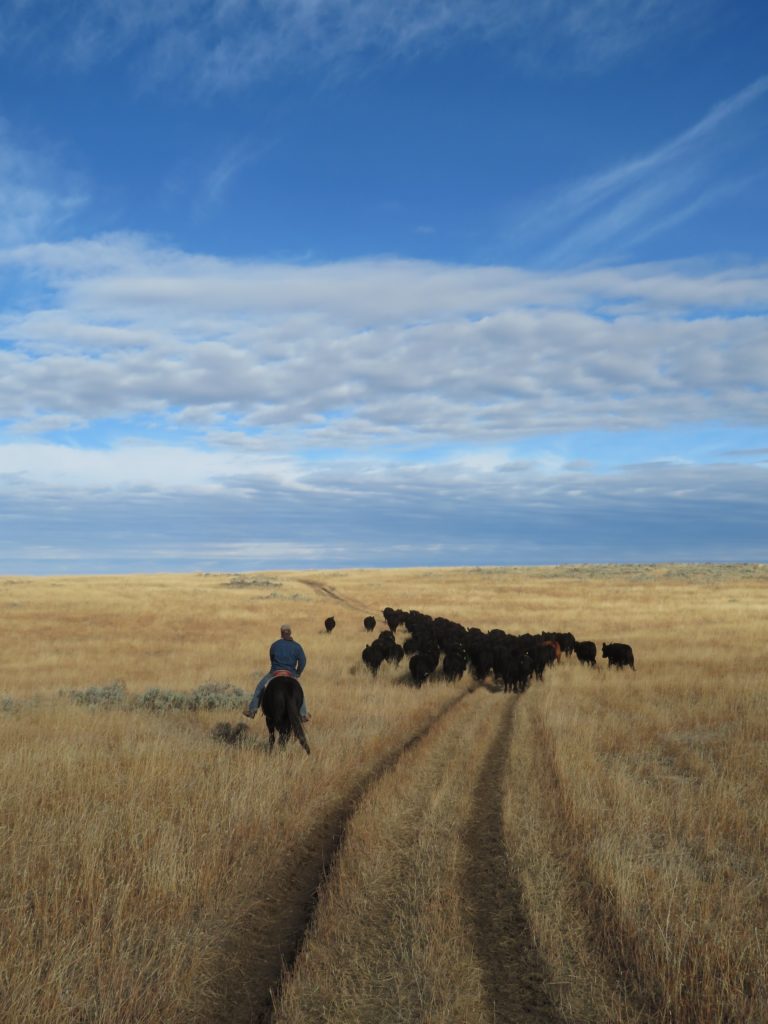 7 thoughts on “Tucked In”