The guys took a turn out in the badlands, gathering what few cows had been missed the past few days.  Victoria and I worked on setting up and cooking for branding.

The sky was dark mid morning… and it looked like I wasn’t going to have a chance to finish mowing my lawn.  Then there was lightning and the breeze kicked up… We had all been chatting together online… did we have enough ice… where was that new table… Megan asked me about the clouds, and if they looked green to me… I didn’t think so, but looking towards Tess’ house, I could tell they were getting slammed with rain. 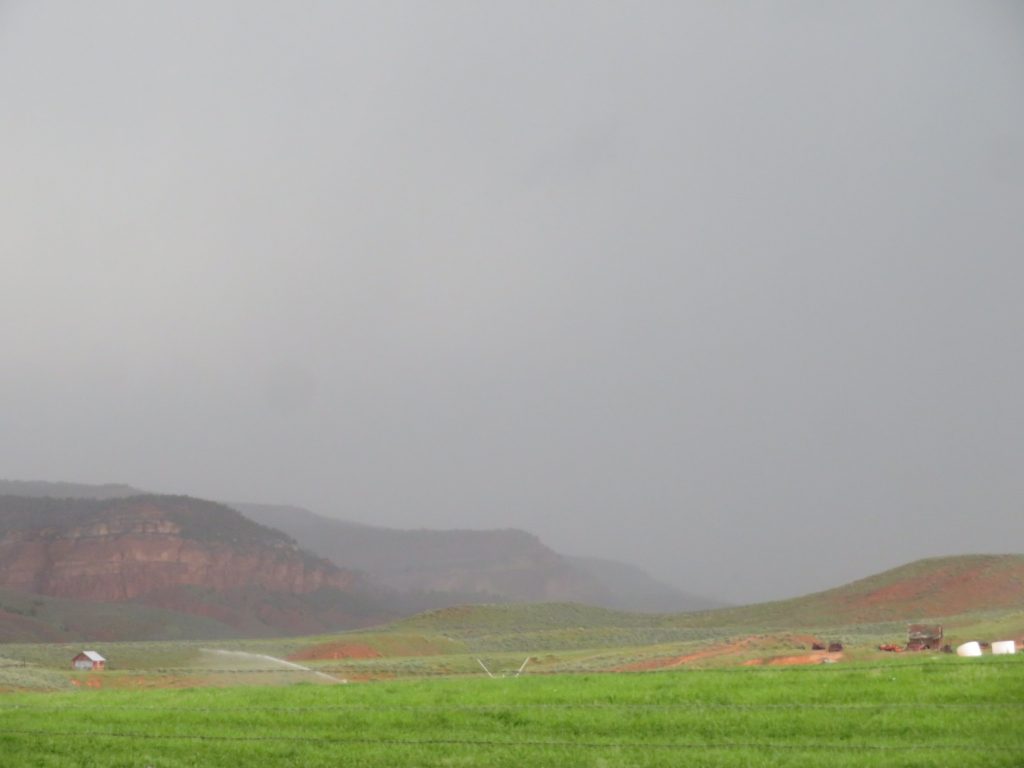 When you can’t see farther than that… it’s bad.

In a few minutes, she sent us this pic. 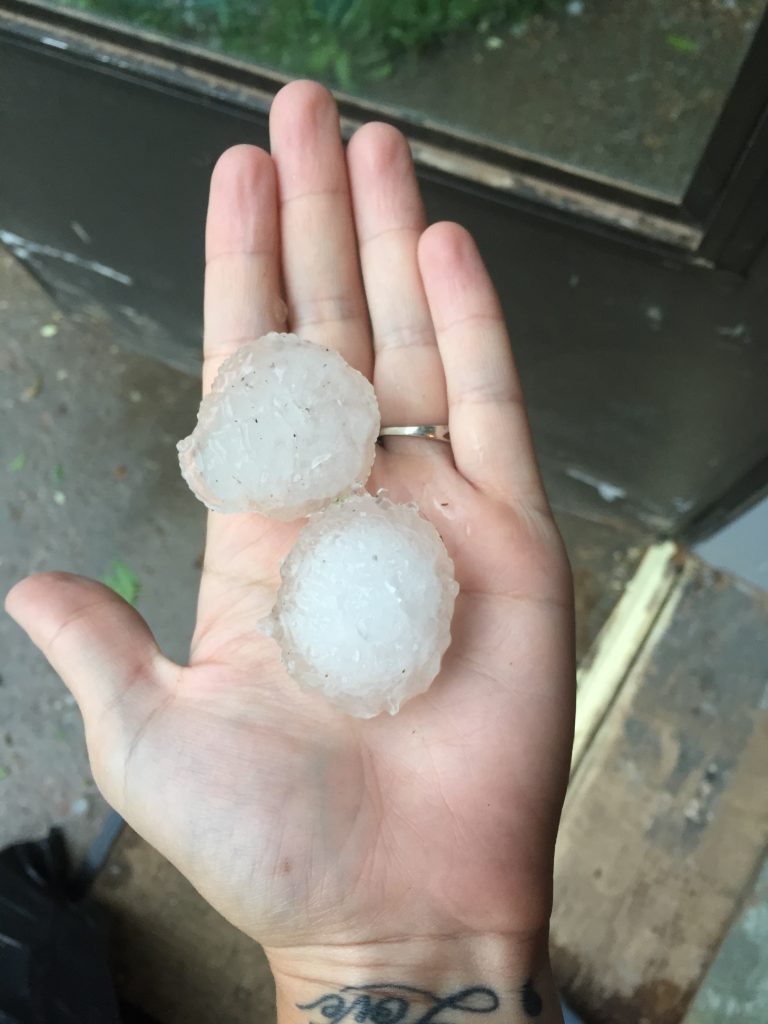 A couple more minutes and Megan said it was starting at her place, just as I was typing to say hail had started at my place too!  Ours was much smaller. So far.  Then. Silence.  When there’s silence while we’re texting… chances are, the other people have lost power, as we use our WiFi, not actual cell service to communicate.

Victoria and I were watching out windows while trying to keep cooking before we lost power, too.  The phone rang.  Daniel told us they’d seen a tornado between his house and mine ( we’re four miles apart).  He suggested I get eyes on it or head to the basement.  We ran to the windows, but could only see a grey wall of hail headed our way.  To the basement we went!

The hail continued… blasting leaves out of the trees and decimating my garden… and knocking down hay in the fields as well. 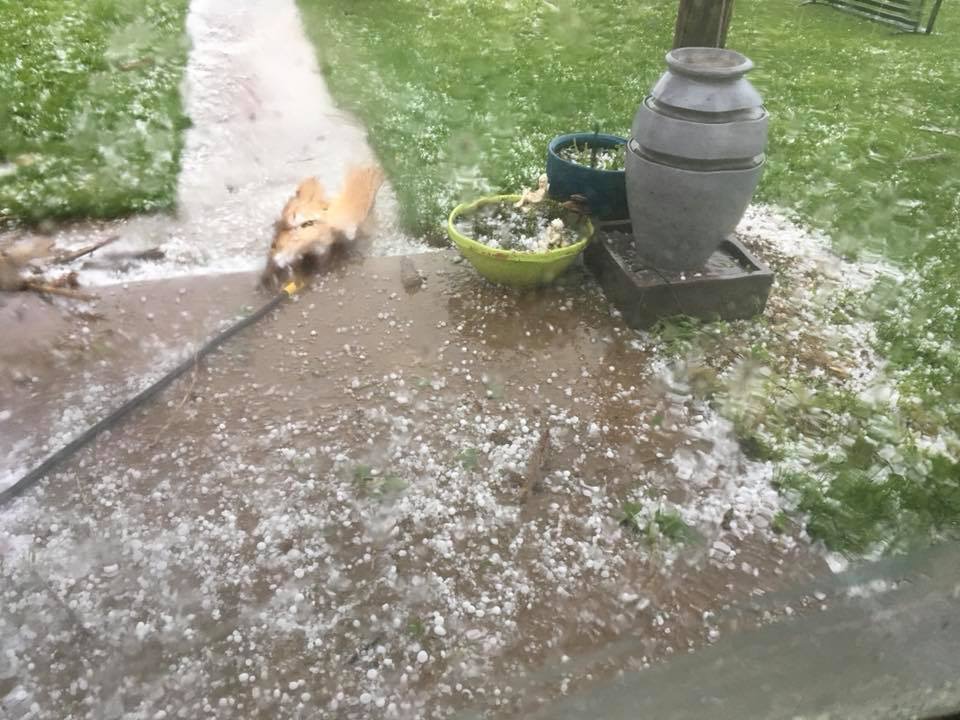 Not near the size Tess had, but bad enough.

Our power flickered, but didn’t go out.  All the dogs were trying to save themselves from the thunder by standing in our shadows…  I called a neighbor to warn her… a neighbor called us later to see if we had power… the storm finally eased up and we ventured back upstairs.  We could see by the radar that the red splotch had passed us by… continuing on up the mountain.  In fact, it traveled up and over the mountain, creating havoc near Gillette, and continued on to the Black Hills.

Then, just as Tess brought up some lawn chairs and showed me her photos… I lost power, too.  Another couple of hours passed before it came back on.  Evidently, it was this guy’s fault. 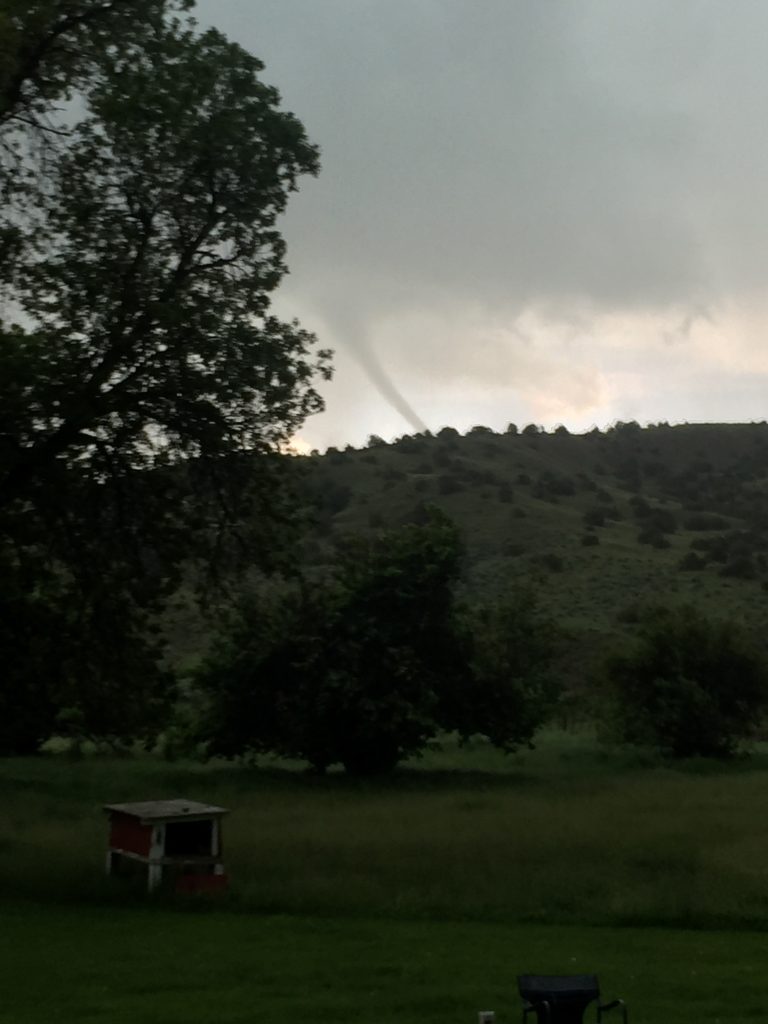 I’ve never seen the like.  Well, I guess I still haven’t as I didn’t see this myself, but you get my drift!

Come to find out, it snapped a power pole in two, causing Tess’ and Megan’s power outage.  When the REA came to fix it, they cut my power as well.  As far as we know, that’s all the damage it caused around here.  Most of the damage was from hail.

Daniel and Brandon had been caught out in it, but took shelter in a pickup for the first bit.  After it eased up, they went back to work before they lost their cows… and ended up with some welts and a goose egg from the hail…

I drove over to check on a neighbor, and all the white in this photo is hail! 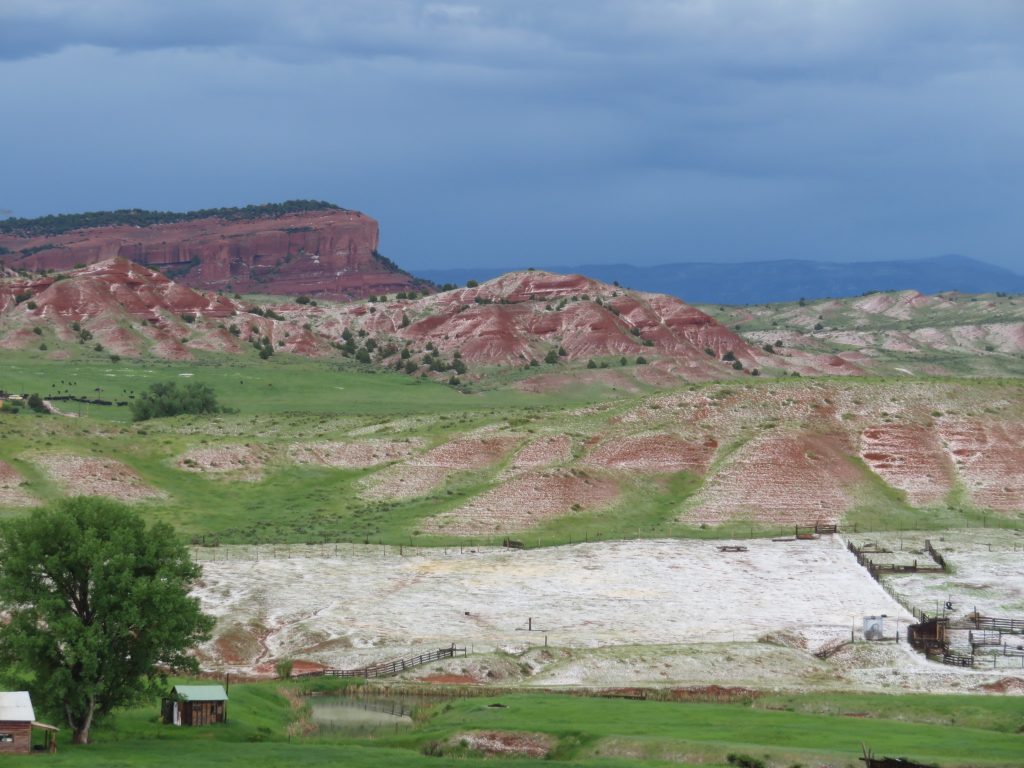 It was an amazing storm… and the rain continued off and on the rest of the afternoon and evening.

It qualifies as wild western weather!