I don’t know if I’ve told this story before or not… after blogging for ten years, you forget things!  But since it’s on my side of the family… I doubt that I did.

This is a photo of my grandfather, Charles Littlejohn Burton, and my father, Charles Leslie Burton (age three?).  My grandfather died nine days before I was born.  The photo was taken maybe in 1932 or 1933… but that’s a guess!  When I blow up my dad’s baby face, I can see me… and Daniel, and maybe some of Jaxon in there, as well.  Maybe it’s the little, blonde, round face!

I’ve tried to learn some stories about my grandfather, but I don’t have too many.  He was a great storyteller… and could weave magic with his words.  He ran some general stores in Oklahoma and,  at one time, had been an undersheriff.  I think my cousins in New York have his badge… which I’ve never seen.

Therein lies the hidden tale behind this photo.

See his pose?  Right side turned toward the camera?  He looks to be quite dapper and proud, don’t you think?  His world came crashing down in 1929.  Not the stock market… but, responding to a call as the undersheriff, his car was sideswiped on a narrow road by a chicken truck.  Which sounds kind of funny… have you seen old movies with crates stacked way beyond the truck bed?  Think Beverly Hillbillies that should have a WIDE LOAD sign.  He had his left arm out the window, trying to catch the breeze on a muggy Oklahoma fall day.  Suddenly, it’s not funny at all.

The chicken truck caught his arm… and rolled it.  Now, back in the day, you wore long underclothes, and long sleeved shirts, and suit coats, even on muggy Oklahoma days.  All those clothes became an instant tourniquet, which was good, because his arm was shattered.  He drove back by his home, where my grandmother was pregnant with my dad, and not wanting to scare her into early labor, held his twisted arm behind his back and simply said, “Sally, I’m ruined.”

So ended his undersheriff career.  Every photo of him from then on is this pose.  Right side toward the camera, his missing left arm hidden.  Who could have guessed?  Old photos hold many hidden stories. 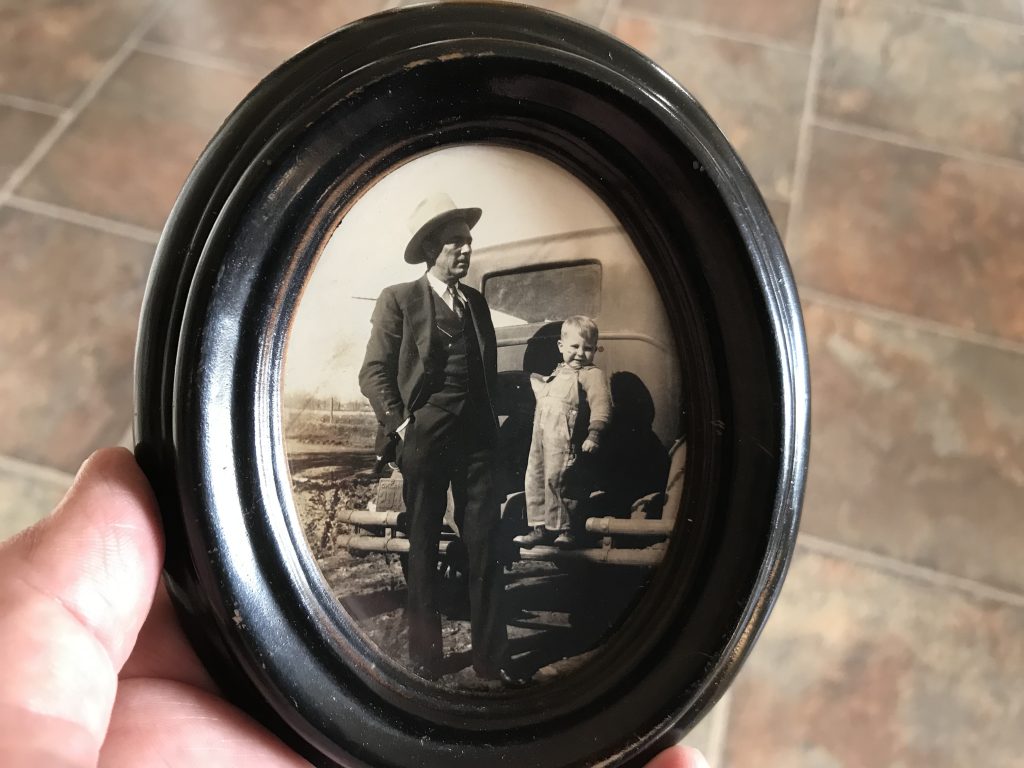