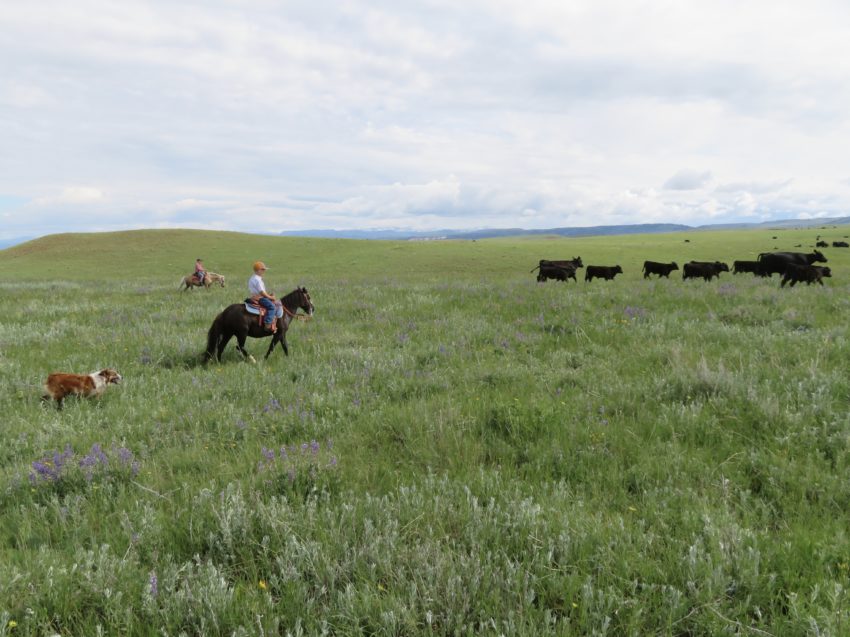 ‘Tis that time of year that we play “cowboy”, and move cows this way and that. We’ve gathered three times in the badlands, sent some to the Mesa, Mills, Violet’s, Horse, and Slope pastures.

Brandon and Victoria rode today, bringing in two errant steers and a bull.

It seems constant, putting those cows with those bulls over there, and another herd here, etc., etc. I think you get the picture.

The other day, we moved the herd from the Mesa to the Slope. Along for the ride were Quinlan and Jaxon. They’re now 7 and 6 years old… and mounted on ponies. After riding through the bottom half of the pasture through burned cedars and rocky slopes, we left Daniel, Tess, and Brandon to make the big loop in search of cattle, and the boys and I headed the short way to the fence corner.

They were having the time of their lives…

I had to keep telling them to “go away”… horses have a tendency to go nose to tail if you let them. It’s just a lazy and very easy way to travel. (Think dude rides) Each boy began to work on their ponies… I used to tell my kids the same thing… “There’s a whole prairie out there! Get away from me!”

They went to work!

It was a great thing to see.

I didn’t get any other photos of the little cowboys since I am usually at the front of the herd, guiding the cattle along the way. But they worked along, bringing the cattle to the next pasture. It’s only a few miles, but then there’s a picnic lunch waiting… and a pond to throw rocks in… and when we finally loaded all the kids, and dogs, and horses into the horse trailer and pickup and headed down the hill, Quinlan and Jaxon were still WOUND pretty tight! I think Daniel told them to be quiet and sit still and close their eyes just for five minutes…

Amazing what effect that advice can have on tired little cowboys!