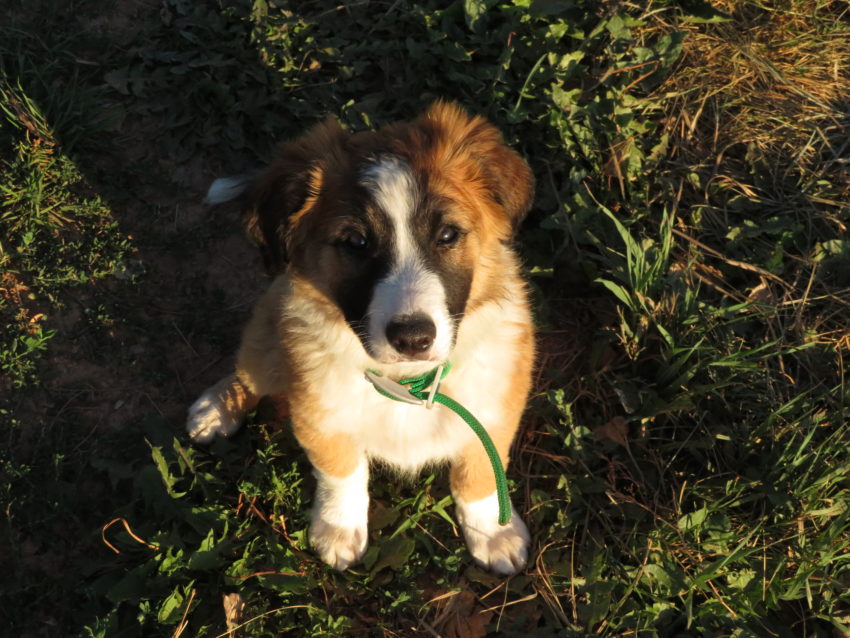 Instagram and nice friends saved me time and money! Noticing that a friend had posted a beach picture from Oregon, I texted B. and asked if she’d be interested in bringing my puppy home for me. She was… with Mary from Shepherd’s Way English Shepherds willing to meet her… things were set!

“Merlin” was a chick magnet in the Portland airport, I heard… tough duty for my friend’s teenage boys. A little minor whining… then he slept the entire flight to Billings. Same thing when they arrived home and put him in a crate next to their bed… a little whining… then he settled in for the night.

We arrived the next day… Vernon going with me to Sheridan since he hadn’t seen B.’s husband R. in years. We had a great visit… “Merlin” was content to play with their dog Midge and take a nap as we caught up on years of news.

I can’t thank B. and R. enough! Once again I was lucky to not have to travel… or drive to Denver! Check out B.’s passion… well, she has many, but this one has its own webpage… Rooted In Wyoming, building school and community gardens. Then there’s R.’s business… I’ll give it a shoutout, too! Wyoming Roofing… Wyoming’s Small Business of the Year! These people are AWESOME!

Yesterday, as I was packing things for the trip, I did a double take with Eden. She was in heat. Oh, joy! I wasn’t expecting that! She was kenneled while we were gone, but I’m never really thrilled to have her inside my house at this time… I didn’t feel like putting “Merlin” in the kennel on his first night either. I took the easy way out, and slept on the trampoline to watch the Perseid meteor shower with two dogs sleeping below me! “Merlin” actually jumped up and bumped the bottom of the trampoline with his nose a few times… I guess making sure I was really up there!

This morning was a hike to the creek…

Yes, Booger came along, too…

“Merlin” did find out that the long grass along the creek won’t support his weight… he went swimming. After the initial shock, it didn’t seem to phase him too much. When Eden crossed the creek… he watched. He didn’t seem to be too interested in following. Suddenly, sploooosh! There he went!

He got two thirds of the way across and stopped. He stood there, second guessing himself… and gave up on following Eden and came back to me!

I don’t think I will be keeping his name… but I still haven’t come up with another one. I’ve had “fire” in my dog’s registered names… and imagine I will with him as well… though it doesn’t have to be in his call name. As usual… Ideas welcome!