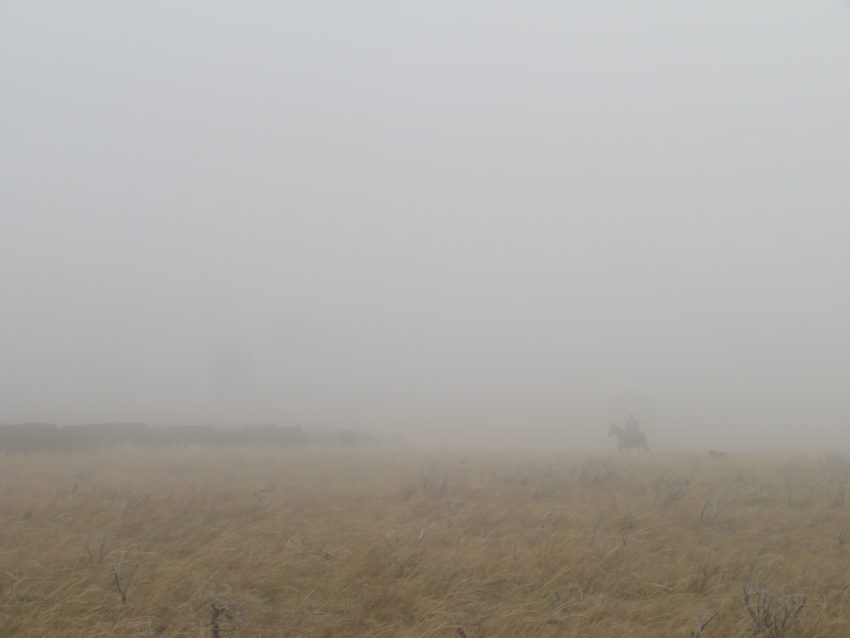 We’d had a full slate of gathering and pregnancy testing our heifers. Normally, we’d follow the vet down the mountain, calling it a day, especially to escape the strong winds that had blown constantly. But there was a debate.

Bad weather was supposed to come in later in the week, when we had planned to wean. Weaning is stressful… calves get sick. Add bad weather, and they could really succumb to illness.

Do we wean ahead of schedule? Could we find semi’s to haul the calves off earlier? Will it be too wet to get those huge trucks up the mountain? What should we do?

If we gathered enough cattle to wean off a truckload of calves first thing in the morning, we’d be ahead of the game. We could then gather more as the truck made its way down the mountain, and then back up.

Off we rode, hunched against the wind.

Within minutes, the clouds snagged on the mountain tops, whisking along, cotton tumbleweeds meeting jagged stone and Douglas fir.

Daniel and Megan ride below me, bringing the cows up from the bottom. I thought the clouds were low before, but now they gust past me. I’m riding in the bottom of a cloud.

My camera has a hard time focusing… whether because of the wind, the movement of Panama beneath me, or because my hands were shaking.

I think I know where I’m riding… but come to find out, we hit the fence a little higher than expected. No big deal, but I could have sworn I was lower!

The horses’ tails are waving. Hoods are up. Shoulders braced against the biting wind. I’m not the only one acting cold. Come on, cows… get through the gate!

We split into jobs, Megan and I unsaddling our horses with cold stiffened fingers. The guys loaded supplies. Having missed supper, we grab some grapes and chips, load up in our respective pickups… and finally head for home.

6 thoughts on “Riding In the Bottom of a Cloud”