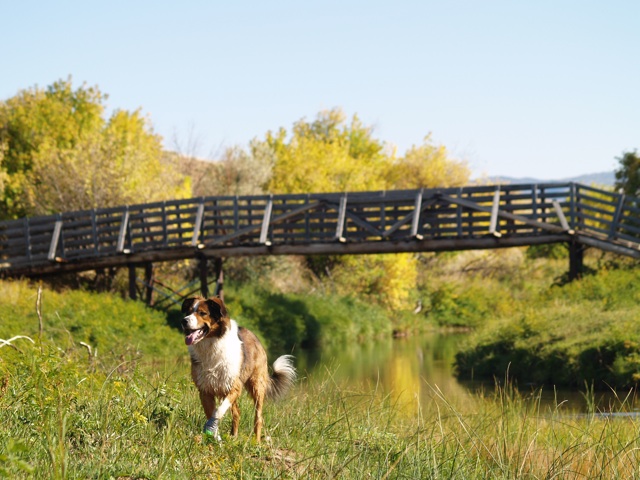 THIS WAS FIRST POSTED OCTOBER 3, 2008. HONESTLY, ONE OF THE WORST DAYS I EVER HAD.

Sounds yucky, huh?  Well, I can attest with my hand over my heart, tears in my eyes, and a sinking heart, that it is much more than yucky to witness.  What is it?  Basically it is when your dog works too hard, add a dose of dehydration, add a hot day, add an unsuspecting owner, and there you have it.  What your mind tells you is a dying dog.  A dog that doesn’t drink.  A dog that can’t seem to catch his breath and pants and pants and pants until you can’t hardly bear it anymore.  A dog that lays flat out on his side and you think – THIS IS IT.  A dog that still manages to mark bushes as we limp past, which brings a smile of sorts to your face, until your realize the urine is red. That was Lucas yesterday after we brought our cows off the mountain.  He was tired.  I knew he would be… but I wanted it to be him that taught Dally her first few times on cattle.  He had brushed up, his typical maneuver on warmer days and long trails when his legs just give out on him.  Nothing unusual.  I had made sure he’d been drinking and had packed water for him from the last spring as I knew it’d be a long dry way home.  But once we had achieved our destination, he quit.  I mean, he didn’t want to move.  Vernon had ridden off to check the ram pump.  I told Johnny to go ahead, that we’d be along, I wasn’t too concerned, even getting home after dark wouldn’t be that bad.  But a few hundred yards into this plan, I knew something was different.  Lucas was way more than tired.  I wracked my brain trying to figure out alternative plans.  I didn’t have my cell phone.  Strike one.  I couldn’t put Lucas on my saddle, 65+ pounds up that high?? and then, climb up to hold him, and hope he didn’t jump and Tart wouldn’t buck??? Strike two.  Carry him in some sort of sling?? Please, I grunt when I load him in my Durango, much less miles off the hill.  Strike three.  So we did the best we could.  We’d meander to the next cedar tree.  Rest.  Meander to the next cedar tree.  Rest.  Meander.  Rest. Meander. We made it to the bottom of the mesa, to the road, to the quiet, still, unbusy, red powdery dusty road.  I was hoping *someone* would drive by and I’d beg them to take Lucas home.  Even neighbors I’m not on the best of terms with would have been victims of my pleas at that point in time.  No one came.  So we meandered.  He seemed to be doing better now that sundown was upon us and the cool air was refreshing.  But lo! in the distance I hear a quiet familiar roar.  In moments, my knight in shining armor arrives on the 4 wheeler bringing a granola bar, Pepsi, and a jug of water.  I grabbed the jug and poured Lucas a drink.  Mercy me, he drank!  We switch modes of transportation, and with Lucas balanced in front of me and Dally clinging on behind, I putt putt for home.  We make it.  Lucas drinks and eats and begins to recover. I don’t ever want to do that again!  He has fully recovered.  Maybe I’ll learn and not take him on long trips.  Maybe he can teach Dally on an outreach program…

This is one of my posts that gets many hits on the internet… unfortunately, that usually means a horse or dog has experienced E. R. I took many photos of Lucas this day on our staggering walk home… I thought it was the last time I might ever see him. I never, ever, ever! took him on a big trail again. He would have gone. He would have worked his heart out for me over and over. I felt so badly that I did this to him… ignorant and selfish… I just didn’t realize how bad he was since he kept working until the job was done. I now have doggy gatorade for those long, hot, dry days, and a collapsible bowl I carry on my saddle, though when you run out of water… you run out of water.