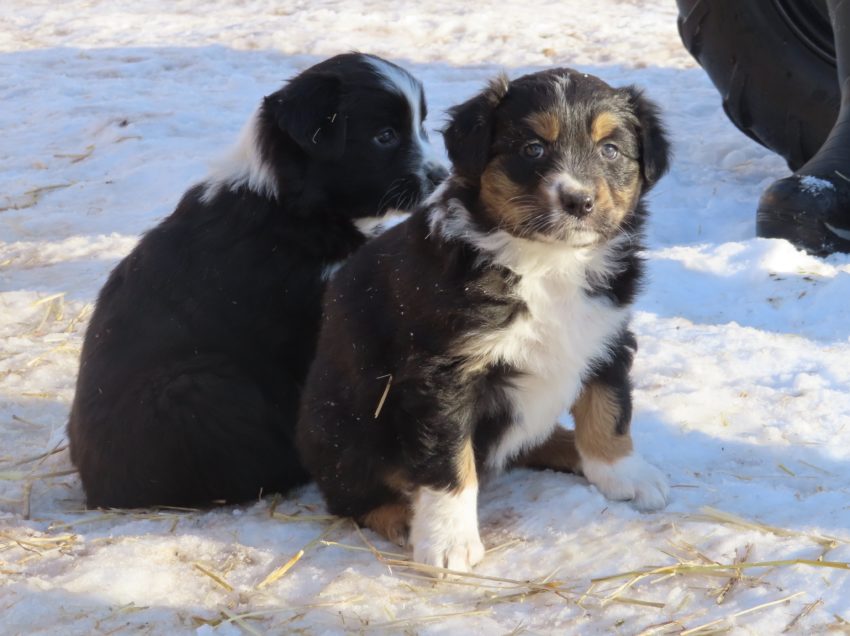 Daniel and Tess went to Hawaii three and a half months ago. My job… was to keep Tuff and Tina, their Australian Shepherds. As I recall, we moved cows the day before they left… and Daniel mentioned that Tina might be coming in heat. “Oh, boy!” I laughed as I bent down to pat her. “Uh. Daniel. She’s *ALREADY* in heat!”

I was working the next day, but they put Tina in one kennel, Tuff in another. We had no idea what day of her heat she was on. They have never been digging dogs… and there was a good frost in the ground, freezing it almost as hard as a rock. When I came home from work… Tuff and Tina were in the same kennel.

I look out my window… no Tuff. As I’m looking for my shoes, I’m laughing because, seriously… I have NEVER had such troubles with my dogs. These Aussies were beating me! Sure enough, by the time I get to my kennels, it’s too late for Tuff and Tina. There’s no doubt she’s bred now! I had refilled the hole, and staked down various bits of metal scraps, but that was against a dog digging OUT, not one digging in. Their cables were wound about them, one so kinked and bent with A BROKEN CLIP, that I threw it away…

Oh, my… at least this failure has turned out to be a CUTE failure.

Do I have video? Yes, I do. Tomorrow!

For T., I hope these puppy pics bring a smile to your face!