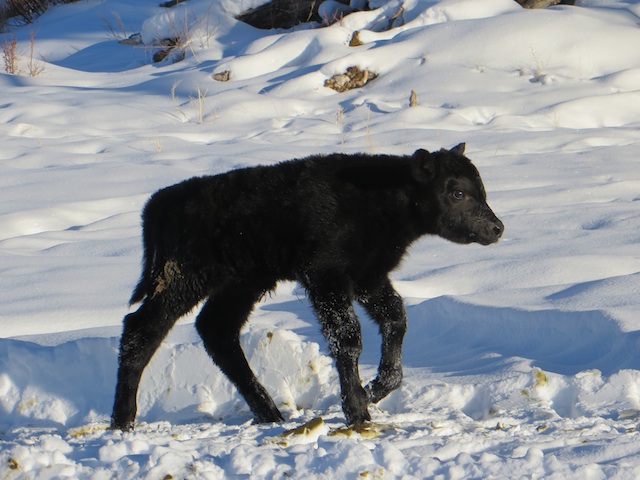 Sooner or later, you do a job long enough, something unusual will occur that makes the entire process glow with a new light…

So it is with checking heifers…

I mentioned before how I check the heifers sometime between 10 and 11 pm.

There are no street lights.

Moonlight and starlight exist in its phases, but believe me, no moon and a cloudy sky make for impenetrable blackness.

That is a fantastic time of night for my imagination to run wild.  As a child, I was scared of the dark.

Those horrors were based on a premise of a strange man coming and looking in my window or being in the house.  I now know, that a strange man, coming into my yard at night, would be surrounded by my pack of English Shepherds, who would give him no quarter!  That fear has poofed into a smoky memory… and as a result, new fears have had to take its place!

I get the creeps when my sister calls and talks about UFOs… or Bigfoot.  I will hurry my steps if the ice isn’t too bad… until I look at Lucas and Elsa and Dally, and know that ANYTHING strange is going to be met with repeated and threatening barking.  Sometimes the black shape of a heifer laying down is enough to set them off!  If something in the darkness is different than it is in the daytime… they let me know.  So why creep out that Bigfoot is gonna come get me until the dogs alert me to that fact??

Unfortunately, years ago, I wasn’t surrounded by English Shepherds.  I had Josie Mae.  A blue merle Aussie known for her ability to sit and “beg” until her backbone turned into cooked spaghetti and she’d flop over for a belly rub.  She was also known for her ability to trot alongside my horse wherever the horse’s cool shadow ran along the ground…  except underneath, though I’m sure she’d have liked to try!

Let’s just say that Josie Mae wasn’t a hard worker… she was sweet.  She was a companion.  She was NOT an aggressive cowdog!

Walking with Josie to the calving shed one evening… my pitiful flashlight battery was weak and barely punctured that blackness.  It would show me a few steps ahead and that was as far as its energy could project.

I checked the heifers.

I closed the gate to the corral.

A short distance away were a few unfortunate calves that had lost their struggle to be walking the earth.

Eyes peering into the darkness.

As my feet returned to the earth, I made myself inhale, then exhale, and turned the miniscule flashlight beam towards the “dead pile”.  The weak light was met by two glowing eyes.  I couldn’t tell you what kind of critter belonged to those eyeballs, because, frankly, I didn’t stick around to do any deciphering!

Upon further reflection the next day, they were large (not raccoon or skunk), low to the ground (as if whatever-it-was was crouching), and wide enough to reassure me that the animal was BIG ENOUGH.

Mountain lion?   My best guess… but I can’t say for sure!

Josie and I were OUT OF THERE QUICKLY!!!   Whatever-it-was could help itself to some dead beef if it wanted!