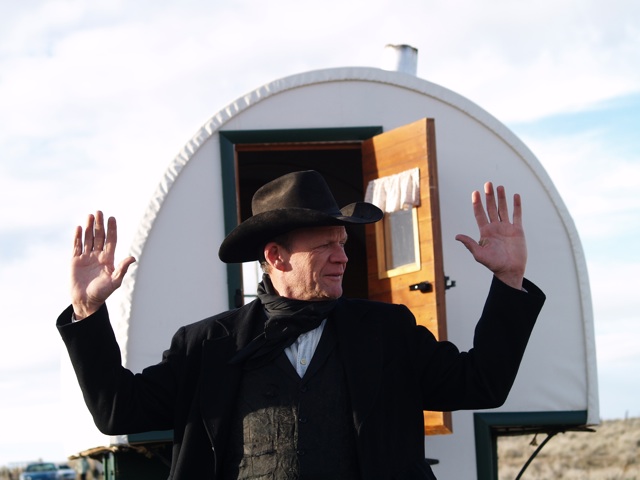 The two brothers dreaded the walk they knew they must take.  Leaving the relative warmth of the log cabin, they trudged outside into four inches of wet spring snow.  The softness and beauty the snow would normally lend to the land now lay eerily upon shapes unknown.  They stepped across Spring Creek’s small meandering flow and headed up the sagebrush covered slope.  It wasn’t long before the stench reached their noses.  Death.  The wet smell of fire dampened by the overnight snowfall.A look passed between  them.  As twins, they didn’t need to speak much, but now as they stood and looked before them, they could smell each other’s nervous sweat, and they both knew what they were going to find.  Dead sheep lay scattered,  contorted forms now covered in snow.  Bleating here and there of the wounded ones, suffering, and huffing red drops of blood onto the snow.  The odor of wet wool compounded the sense of dread.  A few more steps up the hill and they finally saw what they had not wanted to witness.A human form lay on his back, staring up at the grey blue sky.  Curled on his chest, lay a black and white collie pup.  Nose tucked under tail, trying to seep more warmth out of the now cold corpse.  The pup heard their approach and bounded to them.  Confused about his surroundings, the pup was eager for more normal human actions… the comfort of a scratch behind his ears, a sweeping move up into solid arms that would steady the little dog.The sheepwagon  lay smoldering – most of it had been destroyed in the fire.  Sagebrush had been piled to the side to add to the inferno.  Inside were two more bodies horribly mutilated by the fire’s power.  Burned flesh was more than the twins could bear and they stepped back and away,  seeking to pull clean Wyoming air into their lungs.  They gasped at the air.  If only they could rid themselves of the sight of deformed torsos of men they had laughingly shared a meal with only hours before.Their gaze turned to the opposite hillside where the other sheepwagon was camped.  Surrounded by what was left of the great band of sheep, that sheepwagon  also was burned.  Dread mounted as they feared more bodies would lay in it as well.This morning and its preceeding evening  would never leave their memories.  A friendly supper.  Speaking the simple words of thanks and good night and see-you-agains.  Then the rifle shots came.  Shots fired over their heads as unmistakable warnings.  A fitful night of pitiful rest until the dawn came to release them.Practicality was rearing its head.  Someone needs to check on the other men in the other sheepwagon.  Authorities need to be notified.  A need to find a place above where the new fangled telephone line was cut and call the sheriff.  A wife needed to know her husband now lay dead in the snow.The brothers stood quietly for a minute.  Their eyes sweeping from the snow capped Big Horns down to the sagebrush slopes they stood upon.  The day they had looked forward to… the first day they would be on their new ranch with all their belongings… had irreparably been turned into the day they would stand as the first witnesses to an infamous day in Wyoming history.  Where cattlemen  attacked  sheepmen, and forever changed the outlook of cattle versus sheep.  The Spring Creek Raid, April 2 and 3rd, 1909.The following are photos I took yesterday at the centennial “reenactment”.  Fred and Frank Greet were the witnesses I wrote about.  Frank was Vernon’s grandfather.

Joe Allemand (aka Clay Gibbons, a local historian) throws up his hands, but is shot dead by the raiders.  His body is the first to be found the next morning.

A collie pup rests by the sheepwagon’s wheel.

“The Night Riders of Nowood” leans against the north monument.

For more information on the Spring Creek Raid, I recommend the book, A Vast Amount of Trouble by John Davis.  Below is an actual photo of Joe Allemand, his sheep, and his dogs.